The economic consequences of David Marr

Marr's Quarterly Essay is very fine, and a vivid portrait of a confused and mentally violent young man on the make, by a master of lively informative prose who is, thus far, our best biographer. But the effect of what might be called its ‘money shot’ is a sapping, or a sundering − if not a suicide-bombing − of our fair-go democracy and he should not have written it.

Whitlam threw a glass of water at Hasluck once on the floor of the House and kept his leadership ― and Hasluck, when Governor-General, swore him in as PM, unfussed. Hawke was ‘a mean drunk’ and a ‘rat with women’, his wife in her bio of him said, yet gained the Lodge after she wrote this. Greiner and Kennett left their wives after loud arguments and went back to them and were not ruled out of public life, nor John Prescott after he punched an interjector at a meeting when deputy prime minister.

Yet lately, things have changed. Dominic Strauss-Kahn is not now President of France because it was wrongly said he came twice in the mouth of a helpless giantess in seven minutes. John Edwards is going to gaol because a girlfriend had a baby he said was not his. John Brogden tried suicide after a drunken bottom-pat and a lewd one-liner in a private conversation lost him the leadership. Troy Buswell lost his leadership for sniffing a chair. And Tony Abbott, well …

I, too, want Tony Abbott gone, but this is ridiculous. If he were brought down for stirring the current shitstorm in which hundreds have drowned, and thousands of children are to be ill-schooled and shamed and tempted by suicide on Nauru, fine. If he were brought down for defending a Dutch trawler’s right to loot our sea of its fish, fine. But for attacking a wall in 1978 and speaking harshly to a female rival minutes after his defeat … really? 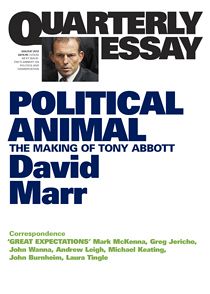 So what is going on here? An argument with one’s wife in which a cup was smashed forty years ago can get one sacked now, is that it? Is that how things are now?

However it is, it isn’t fair. And David Marr, fine writer and imminent old age pensioner, should be a little less joyful, I ween, in his flushed and lurid pursuit of catty headlines in these, his twilight years. His knee to Rudd’s groin caused Gillard’s dim ramshackle rule, and Labor’s mauling nationwide by voters thereafter unpleased by women rulers. His pussy-whipping of Abbott will, in turn, I fear elect Scott Morrison as prime minister and he should have thought before he so waspishly scratched and bitched and prissily pounced.

There will be a book eventually written called The Economic Consequences Of David Marr. A hung parliament, a needless panicky surplus, a hydrophobic Campbell Newman trashing our social democracy all derive from David’s ‘rat-fuck’ tut-tut.  And the Labor Party’s extinction may derive from this ‘wall-fist’ tut-tut, over a bashed wall and some up-close home truths said to a tough little woman long, long ago.

But I do not. This fair-go country is, or used to be, better than that. And we, or some of us, should be ashamed.