IA republishes in full the Australians for Honest Politics chapters of Margo Kingston's book 'Still Not Happy, John!', as well as reams of documents released by the AEC.

AFTER THE PUBLICATION of my book Not Happy, John! in 2004, former Liberal Party staffer Christian Kerr, then political correspondent for Crikey, told me the ʻAustralians for Honest Politicsʼ chapter was dynamite, ʻthe most importantʼ in the book.

Christian did his best in ʻTony Abbott's unholy dealings with the AEC’ — but Abbott is something of a protected species in Australian politics. When push comes to shove, press gallery heavies circle the wagons around Tony and our supposed electoral watchdogs file him away in the bottom drawer.

As recently as December 17 last year, The Monthly aptly described ʻa scandalous lack of curiosityʼ in the media about the Ashby scandal — just the latest attempt by Liberal Party players to use the courts to destroy their political opponents.

Abbott has relentlessly pursued Prime Minister Gillard over what is, in the end, an allegedly misleading letter she sent – before entering politics, as a lawyer – to the Western Australian corporate watchdog. He said she had committed the crime of misleading a government body, while failing to produce the evidence or to refer his allegation to the police. Instead, he demanded that she prove her innocence and promised a judicial inquiry — once he had taken her job.

Yet he has not called a press conference – or even agreed to an interview – to discuss and answer serious questions about the involvement of senior liberal figures in the Ashby case, and has assiduously avoided accounting for his actions and knowledge about the affair. Last week, for instance, he almost ran from a press conference that was ostensibly about the surplus when someone asked him a question about Ashby.

The Liberals have a long history of using the courts to destroy their political rivals, as Mike Seccombe reported in his ʻTricks of the tradeʼ article in the Sydney Morning Herald in 2003. They nearly wrecked the Western Australian Democrats, and Abbottʼs backers funded the beginning of the case that would eventually see Hanson sent to jail — until her harsh conviction was quashed on appeal.

There are many similarities between the Abbott/Hanson scandal and the Ashby affair. Both involved moles in the camps of opponents. Both see the use of these moles to take court action designed to financially and politically ruin those rivals. The funding for both stings remains shrouded in mystery. As Party leaders, Howard and Abbott fobbed off questions about what they knew; and as protagonists, Abbott and Brough initially lied about their involvement. And the media, as a whole, does not want to investigate.

The two chapters of my book about Tony Abbottʼs inaptly named Australians for Honest Politics Trust are a character study of the alternative Prime Minister, which I hope Australians of all political stripes will take the time to read. They show he is a serial liar, thinks nothing of misleading a government watchdog, holds ordinary Australians in contempt, and believes his financial backers should remain a secret from the Australian people.

There are several Liberal frontbenchers, "small l" liberal and "big C" conservative, who are strong, ethical, open and worthy of asking the Australian people to lead them. I hope that the Liberal Party will ensure that Abbott is removed as leader, and replaced with one of these women or men, for the sake of all of us.

Thank you to Penguin for giving Independent Australia permission to publish two chapters of Still Not Happy, John! Defending our Democracy (2007). For now, we are publishing the PDF's. IA hopes to have these chapters in e-book format soon. Penguin will also be publishing the entire book as an e-book in the near future.

Click on the image below to open the relevant chapters as a PDF: 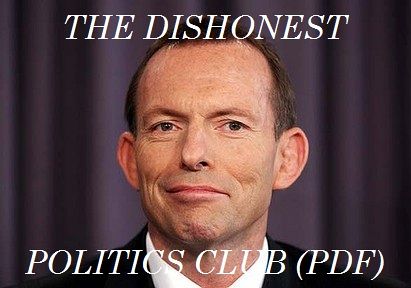 (Source material for these chapters can be found at the Australians for Honest Politics website.)