Margo Kingston’s 2007 bestseller ‘Still Not Happy, John!’has been relaunched as an ebook. Here's Margo's illuminating new introduction, in which she also discusses her new life in new media. 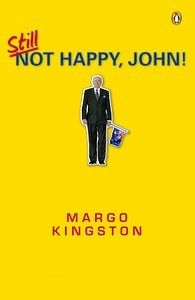 It’s a funny feeling to be writing an introduction to the ebook of Still Not Happy, John!, because after so many years in retirement I’m now back doing what I love – writing for and editing a citizen journalism website.

Back then it was with the Sydney Morning Herald’s Webdiary, created in 2000 and the inspiration for my 2004 book, Not Happy, John!. The book saw Fairfax turn its back on my work, and after a gruelling struggle to save Webdiary, I retired hurt in December 2005. A community-supported Webdiary finally closed last July.

Its successor, thanks to Twitter, is Australians for Honest Politics, created in December 2012 by former Webdiarist Tony Yegles, my AFHP co-publisher.

After seven years as an internet refugee, I’m now a Twitter obsessive, and surprised I’m still up for it. For me it’s ground hog day, but with the bells and whistles of technology making the process easier and more fun. And I’ve been given an armchair ride on Twitter due to the support of many former Webdiarists who’ve since become internet writers and activists.

What brought me back was a compulsion borne of amazement that the media had let Tony Abbott get away with claiming the AWU slush fund saga was a question of character for the PM (‘Australians for Honest Politics’ is the name Tony Abbott gave his own slush fund, detailed at length in the book).

My first piece back in action – which only Independent Australia would publish – was about Tony Abbott and his slushy character question.

Only Michelle Grattan, now a fellow escapee to online new media heaven, had the class to acknowledge a collective lapse in memory in the Press Gallery. No one took up my challenge to push Abbott on his unanswered slush questions, despite their ferocious pursuit of Julia Gillard on hers.

Having put history as completely back on the record as I could thanks to The King’s Tribune and New Matilda, I was set to resume my new life until I noted with alarm the extraordinary lack of mainstream media interest in the implications of the Ashby judgement. I wrote of the resonance between the old Abbott slush story and the Ashby scandal, then howled with dismay at the lack of Ashby follow-up.

Several tweeps asked for an ebook of Still Not Happy, John!, and Penguin has kindly obliged. I feel it’s worth a read, or a re-read. Here’s why.

It embodies Webdiary’s vision of collaboration between journalist and reader, which I feel is the only way journalism can survive. Two lay Webdiarists, Jack Robertson and Harry Heidelberg (a nom de plume for David Davis), wrote chapters. I also commissioned chapters from two working journalists, Antony Loewenstein and Paddy Manning. Paddy’s chapter on the Howard Government’s attempts to muzzle NGOs via the Institute of Public Affairs is relevant today, because the IPA is now ubiquitous in newspapers and on the ABC without any acknowledgement that it is secretly funded to represent certain big business interests.


The book documents, particularly in the chapters on Abbott’s slush fund, the Iraq war (the first a government entered into without the support of the Australian people) and the extraordinary, largely unreported Howard-endorsed takeover of our Parliament by President Bush and President Hu, the efforts of citizen journalists to get the facts and tell the story the mainstream media did not tell.

This documentation of citizen journalism provides an historical context to what will be, in 2013, the first federal election significantly shaped by social media.

When I covered Pauline Hanson’s election campaign in 1998, documented in Off the Rails: The Pauline Hanson Trip, I experienced the shock of One Nation geek Scott Balson recording the media and posting comments about us. This election, citizen journalists will be active in reporting the news and reporting the media getting the news. It has already begun, and it ain’t pretty.

Two chapters describe Fairfax values (which still live on in journalists, if not in the doomed shell that is Fairfax today), and how Fairfax journos fought to protect them against attempts by the Howard government to meet the demands of Kerry Packer and Rupert Murdoch. Both political parties have played with these devils, and I strongly believe that the Abbott-Murdoch partnership will, if it triumphs at the election, destroy what is left of the fourth estate’s capacity to hold the powerful accountable to the people.

It is also useful to look back on what is now seen, apparently, as the ‘golden’ Howard years, and to remember his government’s record. And to notice that, compared to today’s Liberal Party, John Howard’s crew was benign. The moderates, seriously wounded under Howard, are now dead. The hard right has taken over, and Cory Bernardi is its talisman.

People say to me:

‘Why bother? Who cares?’

‘Well, all a journo can do is put out the information, and if people don’t want to read it then at least they’ve had the opportunity!’

Thanks to Penguin, here it is.

Me, I feel relaxed and comfortable sitting outside the system looking in. In my day, I was the first highly paid mainstream ‘blogger’, regularly on radio and TV. The nasty right, exemplified by Tim Blair, were the volunteer outsiders. Now Tim is ensconced in News Ltd, Andrew Bolt is the most-read mainstream blogger, and I’m the volunteer ignored by the MSM.

Times change. I like where I am more than where I was. Because I’m free.

(‘Still Not Happy, John!’ is published by Penguin. You can download it as an ebook by clicking here.)