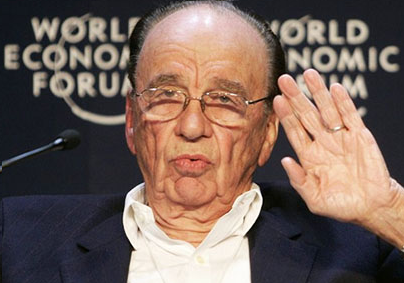 WHEN THE Gillard Government announced a set of mild reforms to media regulation recently — I had an epiphany.

Why would the long-beleaguered Labor Government announce a set of controversial reforms in the lee of an election? Ones that were designed to produce a visceral response from Australia’s "free press" free marketeer cheer squad — Kerry Stokes, Gina Rinehart and Rupert Murdoch. These are people who were never going to sit blithely by while an almost displaced puce PM brought in unnecessary oversight over their overgrown patch.

Did Gillard and Conroy expect their reforms to get through? I doubt it. There was something else afoot, quite obviously.

Now, I may be proven wrong, but it is my view that this was a coldly calculating shot in a long and intense bout of rope-a-dope that may ultimately prove to be the undoing of her opponent, ‘Punchy’ Tony Abbott, as well as the man in his corner — ‘Coach’ Rupert Murdoch.

Gillard, and her British media adviser, John McTernan, have come up with a plan ‒ a very risky plan, I’ll grant you, but one that just might work ‒ to pit the old media against the new.

Gillard and her new Scottish muse have gambled all they have (which isn’t much, admittedly) that the power of the fifth estate – the new, and generally progressive, online media of the type you are reading now – along with the sway of major social media channels, like Twitter and Facebook, will be enough to overshadow the power of a now openly biased and corrupt old media.

It's a huge gamble the pair have made — and one with so much at stake for the rest of us.

Why do I say this?

Well, firstly, have you ever wondered why it is that Rupert Murdoch ‒ a filthy rich American citizen who owns 70 per cent of Australia’s press ‒ gives a hoot about what happens to Australia’s media?

Of course, Rupert was born in Australia before he renounced his Australian citizenship. In Britain, he is persona non grata after the phone hacking scandal caused him to close down his most profitable paper, the tawdry News of the World. In the United States, investigators are, reportedly, closing in on similar infractions.

Despite the best experts saying these things could never happen in Australia; sources say phone shenanigans have been happening here longer than anywhere. Murdoch would hate a properly resourced Leveson Inquiry to happen in Australia.

Australia is where Rupert’s fortune was made and it’s his last bastion should things turn sour outside.

So, why does Murdoch hate Gillard and want her gone?

Well, Murdoch, despite many people’s misconceptions, is not an agent of any particular party, not at all — in fact, he regards himself as well above such banal political chicanery. Rupert is a Renaissance man, and ostensibly cares about the world around him, but when push comes to shove, he elevates his real interests — power and money, in that order.

For example, the word went out from the man upstairs in 2007 that Howard was finished and so the News Ltd newspapers changed their tone to suit. Kevin Rudd became, in a segue as seamless as Scorsese, the new version of Honest John; a true fiscal conservative, they called him, and they helped him stroll into power in 2007.

Of course, then Rudd started playing up.

He wrote a piece in The Monthly decrying neo-Liberalism.

Then he decided to implement a tax on miners’ absurd profits during the height of the mining boom; well, that was enough for Rupert. The News Ltd papers turned sour.

Rudd’s goose was cooked. He was meant to limp towards a defeat by Murdoch’s newly annointed main man, Tony Abbott. But then something happened that mightily displeased the mighty Murdoch — Rudd got chucked aside by his own party in his first term.

That hadn’t ever happened before.

So, all of a sudden, a female – heaven help us! –  took over — one who had never dealt with the midget marauder before and with whom there was no deal in place.

What a debacle! Well, we’ve all seen what’s happened since.

Firstly, it’s clear that the idea of any person with power who doesn’t answer to Rupert Murdoch fills the petite plutocrat with tiny feet stamping rage.

Which is why, when Gillard announced we were going to have an individual with virtually no powers to oversee Australia’s voluntary, self-regulating, toothless and totally ineffectual Press Council — she knew Murdoch would react. She had already attracted his ire by putting the overseas Australia Network – something Rudd had clearly promised to Murdoch – permanently in the hands of the ABC.

She knew Murdoch would react — and rage he did.

Murdoch may not have realised that Kim Williams was an absurdly unconvincing advocate, or that putting a bunch of dictators on the front cover of your highest selling daily paper was bad PR, but last month definitively damaged Murdoch’s operations.

And with Tony Abbott's pocket moistening praise of Murdoch at the IPA 70th birthday dinner, the Australian people have been left in little doubt who Murdoch has in his… well… pocket.

It was a good look for Independent Australia, however. Our hits rose 25 per cent — which was more than the average 15 per cent of the last six months. Was it all to do with our brilliance? We’d like to think so, but no, it was not. The truth is, people are turning off mainstream media and, especially, print newspapers at a rapidly escalating rate. People just don’t buy newspapers anymore, and more and more people get their news from Facebook and Twitter. I feel sure most online operators would have seen a similar spike.

And this is just why Murdoch feels he must act.

Murdoch’s newspapers have never really been more than a means to control public opinion and throw his weight around.

The Australian has never once turned a profit in its 49 year history and Murdoch’s other major newspapers – the Herald Sun and the Daily Telegraph – have always been marginal in strict business terms, never making much more than 5 or 6 per cent returns. For the wily old spider, this has never mattered, as it is their ability to influence the course of the nation, and his own business affairs, that have made him place them at the centre of his vast web.

But these papers’ power is almost gone — nearly no-one reads them anymore.

And, if Labor is re-elected, the national broadband network will be built fully — and that will change our communication infrastructure permanently in every way. The power of internet TV (IPTV) will be unleashed, that is for sure, and Murdoch’s last profitable business, cable TV, will be swept away like a bobbing jumble of forgotten flotsam.

The world is changing and Murdoch’s power to dictate events is ebbing fast — maybe more quickly than most appreciate. And, as his attacks build and become more vociferous, and more urgent, well — you can feel the old man’s desperation levels rise.

Murdoch wants to leave a legacy for his children – and, in his own special way, the world – but his powers are waning and the sands are slipping through his fingers.

Gillard and McTernan see that the stage is set. They positively want Murdoch to launch himself at them and exhaust all his resources trying to defeat them; to blow himself out, like Ali did to Foreman in the African jungle.

The establishment media, they know, holds no candle for them; even the ABC, the so-called balanced provider of truth, has been shorn from its charter by a Howard appointed evangelist and Liberal Party staffer.

Will the Fifth Estate be big enough and powerful enough to sway the election by September 14?

It will if you can help.