THE ABBOTTITE HERESY grows not just wickeder but crazier by the day.

We are now told we can afford eight dollars a week to save the health funds but not ten dollars a year to save the auto industry and the fifty thousand jobs that feed it, and the hundred thousand of kids and their mothers that need it to continue.

We are told we need many naval vessels to turn back boats to nowhere, but none to save whales from their predators — a single unarmed plane will be sufficient.

We are told that all disabled people are deserving, but some are more deserving than others and the less deserving will be sentenced to hard labour.

We are told that all Indigenous people are deserving, but if they want to prove it, they must pay for their own lawyers.

This is nothing like Menzies liberalism or even Howard conservatism — it is something new. It is the wolf coming down on the fold, seeking whom he may devour.

First on the list is children — the crippled, the autistic, the language-challenged. They will not get what Gonski ordered but what Pyne sadistically, crazily, changeably preferred to lash them with.

Next comes the women. They must now look after their disabled mothers and pay, somehow, for their kids’ textbooks and shoes out of budgets dwindling daily as rents rise, jobs vanish and uni fees go up. They must now seek extra work and hardly see their kids at all.

None of this is necessary.

The recession that is coming for sure now could have been averted by a Holden levy of two and a half café lattés a year. A surplus could have been restored by a freeze on rents, a temporary increase in the GST and some judicious printing of money. 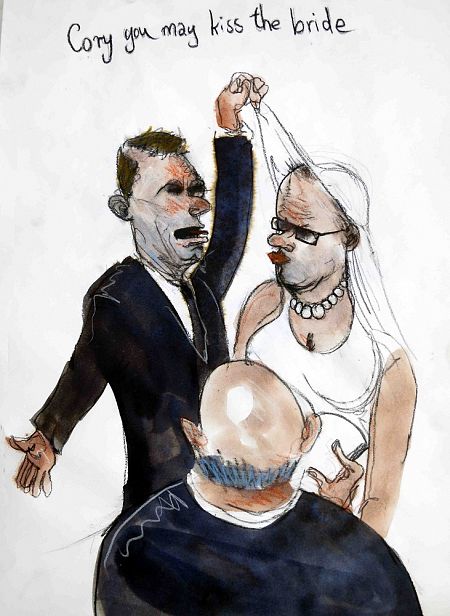 The Abbottite Heresy is not about sense, however, it is about punishment — and, if the truth be known, religious punishment. Those who are non-Christian heathens are to be locked up on Manus or forbidden permanent visas. Those who are non-Christian agnostics will have Radio National taken away from them, and not told about climate change by scientists whose jobs have been abolished. And those who want to study science, like my son, in the lab will not be allowed to do so here.

For science is a mistake. It is not conforming to Biblical prophesy and it will have to go. The Abbottite jury in the new Monkey Trial has found against it and science will be imprisoned for a while. And if two thousand whales die on our watch unlawfully, it is God’s will.

It is as crazy as that, already. And if Sodomites want comfort and confetti in their abomination, they can go to Spain and live there.

We are entering a short, sharp Dark Age in this country.

The originals of John Graham's art, as featured in this piece and elsewhere on IA, are available at very reasonable prices by contacting the editor at editor@independentaustralia.net.