The Coalition denies its dismal failure on jobs

THE NUMBER of Australians now looking for work climbed to 713,000 in July, the highest in 14 months. More than one million people are underemployed. Tens of thousands of people over the retirement age have been forced back to work.

Why these facts are so appalling is that the last six years – including the last 14 months – have seen the strongest global surge in investment, growth, jobs and profits since World War Two. The vast majority of developed countries have seen the numbers of jobless people plummet and the rate of unemployment tumble. Australia is one of the very few laggards whose jobless rate has barely budged over the last six years of extraordinary economic expansion.

This is illustrated in the silver chart below, which shows jobless rates in July 2013 for the 36 wealthy, developed member countries of the Organisation for Economic Cooperation and Development (OECD). The average was 9.04%. Australia was well below that, at 5.62% and ranked eighth among that group.

Over the six-year period since July 2013, all well-managed economies have seen their jobless rates dive as the global boom has encouraged investment, infrastructure development, retail trade and the flow-on from retail to wholesalers, importers, manufacturers, primary producers, transport, service providers and beyond.

Clearly, Australia has not benefitted from the global boom. Its jobless rate has declined only marginally from 5.62% to 5.23%. Its ranking has collapsed from a creditable eighth to a miserable 20th in the OECD.

Since 2013, the reversal of the policies which generated the world’s best-performed economy through the global financial crisis has kept the jobless jammed above 5%. There is no excuse for Australia to have missed out on the surge in jobs happening nearly everywhere else.

Morrison's speech today should start with 'once upon a time' because it's an absolute fairytale. The reality is under this govt debt has more than doubled, 1.1 million are underemployed and we've seen the lowest wage growth in 25 years.#auspol pic.twitter.com/hPXGEGGu4A

The detailed monthly data from the Australian Bureau of Statistics (ABS) just released shows workers who need to work more hours exceeded one million for the first time in July 2014. That followed the first of six failed Coalition budgets. It has not fallen below seven figures since. It hit a record 1,161,000 in May this year. It is only marginally below that now, at 1,143,300.

Older Australians forced back to work

The percentage of Australia’s population aged above 65 now working increased over the financial year from 13.9% to a disturbing 15.1%. 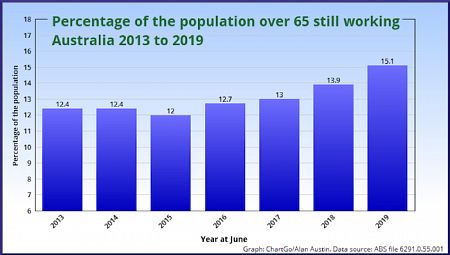 Last month’s ABS data shows 163,700 Australians have been looking for work for more than one year. It has been above 150,000 for 65 of the last 67 monthly surveys. The highest this reached during the Rudd/Gillard years was 133,100 — even during the worst global recession in 80 years.

Number of weeks looking for work

The strongest growth sector has actually been government jobs, despite multiple Coalition promises before the 2013 election “to trim the public service.”

This underscores the reality that Australia has not participated in the global boom in corporate investment, jobs, wages and profits.

The Morrison Government and the mainstream media do not want Australians to hear the truth about jobs in Australia.

In his speech to the Business Council of Australia last week, Treasurer Josh Frydenberg said:

More than 1.4 million new jobs have been created since we came to office and our employment growth today is more than three times the rate we inherited. Over $300 billion of tax cuts set out in the last two budgets have passed the Parliament enabling Australians to earn more and keep more of what they earn.

Yes, there are more jobs. But nowhere as many as there should be. And no, the changes to the tax regime have not made the jobs situation better but actually worse.

.@JoshFrydenberg fries the economy https://t.co/Xd6ZxVZ3AH It is as if the #COALition scoured the country far and wide to identify the person least capable of being Australia's Treasurer, and gave him the position. But that couldn't be what really happened could it? #auspol