THE SAGA around section 44(i) of the Constitution continues, with news today the High Court will hold hearings into the five MPs suspected of falling afoul of it so far, on 10, 11 and 12 October.

One of those MPs is Deputy Prime Minister Barnaby Joyce, the member for New England, who is alleged to hold New Zealand citizenship by descent. The High Court also ruled today that former New England MP Tony Windsor, who lost to Joyce at the last election, would be able to join the challenge against the sitting MP.

So, things look pretty grim for Joyce — but never fear, Barnaby, Independent Australia may have found your Great Escape!

How? Well, you may recall a recent report in which Sydney barrister Robert Angyal SC argued that, under a strict interpretation, all Australians would be excluded from joining Parliament.

All Australians are eligible for the rights and privileges of New Zealand by way of automatic Australian Resident Visa. Therefore, asserted the Sydney silk, all Australian citizens would be at odds with section 44 of the Constitution, which prohibits anyone from entering Federal Parliament who is

'... entitled to the rights or privileges of a subject or a citizen of a foreign power'.

A simple search of the New Zealand immigration website shows that it is, indeed, true that Australian citizens are automatically granted the right to live and work on arrival in New Zealand.

Quite the dilemma for the High Court, as it ponders whether to clean the riffraff out of Parliament House in October.

But wait a minute! A further search on the criteria for obtaining this automatic visa status shows that, in order to be granted this visa, Australian citizens must be of 'good character'.

The website explains that 'good character' signifies someone who does not have 'serious character issues'. 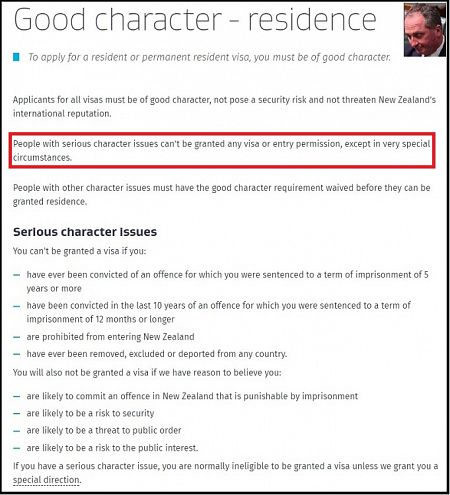 The section on 'Serious character issues' lists the usual examples, like criminal convictions and drunk driving offences, but interestingly also includes having ever 'publically made a racist statement'. 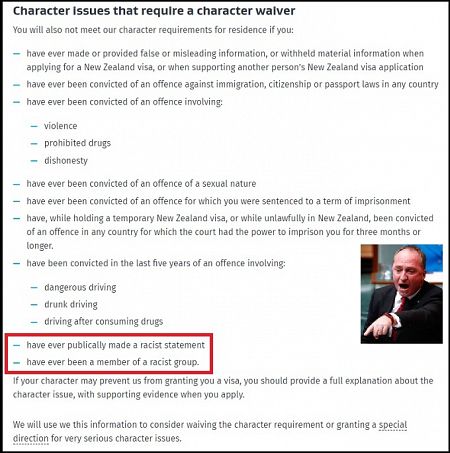 It also says your application may be deferred if you are

'... currently under investigation, wanted for questioning, or have been charged with an offence which, if you are convicted would be considered a serious character issue.'

To summarise, this literal interpretation of section 44, anyone who is an Australian citizen is disqualified from entering Federal Parliament unless they fail the New Zealand Government’s good character test by way of being a criminal, racist, under investigation or one of the other exclusions.

Get your lawyers onto it, Barney.

We now wait in eager anticipation for the High Court to consider his case.

"I was told by a friend that a nasty Joyce became very personal regarding Tony Windsor in the campaign for New E..." https://t.co/jGd44MLLe7

Why governments don’t stand up to banks