How would opponents of marriage equality feel if powerful lobby groups campaigned against divorce or getting married for the 2nd or 3rd time? Well, that is probably how the LGBTIQ community feels, writes Benjamin T. Jones.

THE ALGORITHMS of Facebook marketing are indeed a riddle wrapped in a mystery. Be it coincidence, specific targeting, or the ironies of the universe, for some reason, a sponsored advertisement was in my news feed urging me to help stop same sex marriage.

Having published an article on marriage equality for the Gay News Network and another on the need to end religious homophobia for the ABC, I probably was not the target market.

Regardless, I was encouraged to sign a petition to stop Bill Shorten “playing politics with same sex marriage”. Anthropological curiosity led me to visit the Marriage Alliance website and Facebook page. There were many memes and selectively edited articles about the danger of supporting the ALP or the Greens. Shorten and Penny Wong were popular targets. 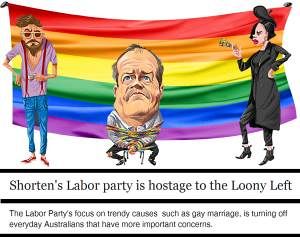 The Marriage Alliance takes a dim view of the ALP.

Funnily enough, there were also pro-Liberal Party posters heaping praise upon Tony Abbott (um, I don’t know how to break this to you guys but …). Malcolm Turnbull is strangely missing from the narrative.

I suppose it is inconvenient if the party this group seems to support is currently led by a vocal supporter of marriage equality. But alas, we wouldn’t want to play politics with this issue. 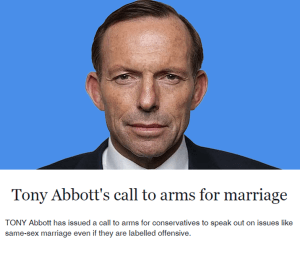 I have a reasonably diverse collection of people in my digital network and it really didn’t surprise me that a few of them “liked” the Marriage Alliance. This is a kick back from my days running in Evangelical Christian circles (for more on that, read my book).

What did get under my skin somewhat, and I know I shouldn’t be so easily triggered, was noticing that one my “friends” was a person who has been married multiple times. Whatever your marital status and history, I don’t think there is a way to oppose same sex marriage without being homophobic. Whether you are afraid for the children, crumbling family values, the decay of Western civilisation, or any other haunting spectre, I’ve not yet heard an argument that isn’t based on fear. Nonetheless, the hypocrisy of divorcees campaigning against marriage equality is more pronounced.

Under Australian law, marriage is defined as:

'... the union of two people to the exclusion of all others, voluntarily entered into for life.'

The Marriage Act of 1961 did not include a definition, however — heterosexual monogamy was presumed. In 2004, amid growing calls to end discrimination against the LGBTIQ community, John Howard – proudly self-described as “most conservative leader” the Liberal Party ever had – amended the legislation.

Religious opponents of marriage equality – and they are overwhelmingly religious – are quick to say they support the “current definition” of marriage. And yet, with some exceptions, they seem to support only the first part of the definition but have a very “small l” liberal interpretation of the second part.

How can you pretend to passionately support the “current definition” of marriage, if you do not believe it necessarily needs to be a union for life?

As a society, we overwhelmingly accept, as we should, that marriage is not always for life. Sometimes relationships break down; sometimes people grow apart, dramatically change, or simply fall out of love. There is an understanding, even among religious people, that it is far better for your emotional health to move on from a dead, toxic, or loveless marriage, than to feel trapped forever.

If, however, we accept that two heterosexual people might have legitimate cause to leave this union “voluntarily entered into for life” and perhaps at a later date begin another union “voluntarily entered into for life”, surely it is beyond ridiculous to deny a same sex couple the opportunity to do the same, to try their best, and even if they fail, to try again.

Is the Marriage Alliance out there trying to criminalise divorce? Are they out there telling heterosexual couples who have been married multiple times that they are destroying society, breaking our traditional values and hurting the children (and unlike being raised by same sex parents, there actually is evidence that divorce can hurt children)? Of course not and it is hypocrisy of the first order.

All opponents of marriage equality – but especially those who have been divorced or remarried – should really take a moment to reflect and empathise. How would they feel if powerful lobby groups campaigned against their divorce as if it were any of their business? How would they feel if the whole nation got to vote on whether or not they could get married a second, third, or fourth time? Well, that is probably how the LGBTIQ community feels right about now.

Religious or not, hypocrisy is always a bad look. 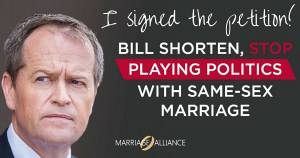 Dr Benjamin T. Jones is an adjunct fellow at the School of Humanities and Communication Arts at the University of Western Sydney. You can follow Dr Jones on Twitter @BenjaminTJones1 or on his blog Thematic Musings.

A #plebiscite campaign will be full of input from groups whose motivations will be murky, yet whose claims could be profoundly damaging.

Shocking demonstration that PM Turnbull can only act with consent of Morrison, Bernardi,Dutton, Christiansen, Abetz & their ilk.