The Australian's media campaign against anti-discrimination

A campaign of distortion and misinformation in The Australian is now underway, says Alan Austin, designed to incite fear about anti-discrimination laws. 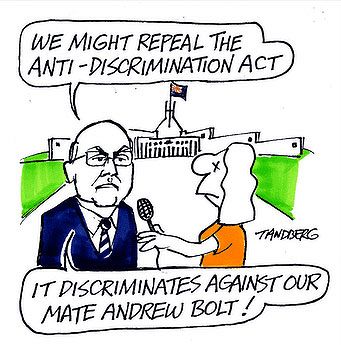 We should not be surprised at vigorous attacks on governments or oppositions in an election year.

But should we accept forays which generate destructive fear and loathing where nothing fearful or loathsome exists? Should we tolerate attacks based on falsehoods and misrepresentation?

A campaign of distortion and misinformation in The Australian is now underway. An article on Wednesday warning of a “tragic outcome” and


...another stolen generation – a generation of young people and children who have had their freedom of speech stolen from within their classrooms

The polemic by teacher at Melbourne’s Trinity Grammar, Christopher Bantick, is titled ‘Censorship dressed up is denial of free speech’. The fear it foments of reforms to Australia’s anti-discrimination laws is based on blatant distortions of the 2011 Federal Court decision in Eatock v Bolt [201] FCA 1103.


...we are not free as journalists, commentators and ordinary citizens to make critical remarks in the course of ordinary political exchange.

Why quote the Opposition? Why not quote Justice Bromberg’s actual judgment? Bromberg, in fact, says the exact opposite (Paragraph 353):


At common law, fair comment exists as a defence to a defamatory comment in order to facilitate freedom of expression on matters of public interest,” the judge affirmed. “It is of importance that on social and political issues in particular, people should be able to express their opinions. Those opinions will at times be ill-considered. They may be obstinate, exaggerated or simply wrong. But that, of itself, provides no valid basis for the law to curtail the expression of opinion.


The fallout of the Bolt decision continues to be felt in lecture theatres and classrooms.

Any fallout of fear and anxiety is the result of the consistent misreporting of the Bolt judgment in several Murdoch publications ever since verdict day, principally in The Australian. There is no basis for “fallout” in the judgment itself. The opposite is the case.

“The fair comment defence at common law extends to protect opinions, even those that reasonable people would consider to be abhorrent,” Bromberg insisted.


If you express an opinion that under the act can be taken as offensive or insulting, even though it was not intended to be so, this is sufficient grounds for action. It may just come down to tone.


If I go into my classroom and in the course of my lesson I use a tone that is apparently offensive or insulting to any racially identifiable group, then I am breaking the law.

This is pure nonsense. Section 18D of Part IIA of the existing Racial Discrimination Act (RDA) is crystal clear. It protects any opinion, however offensive the content or tone — provided it has a legitimate academic purpose.

Here is the exact wording: 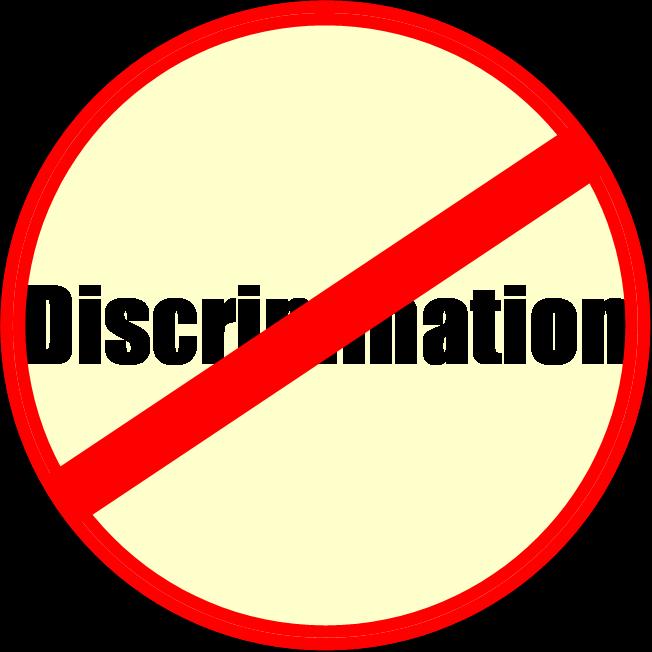 Section 18C [which requires it proven that someone was offended, humiliated or intimidated] does not render unlawful anything said or done reasonably and in good faith:

(a) in the performance, exhibition or distribution of an artistic work; or

(b) in the course of any statement, publication, discussion or debate made or held for any genuine academic, artistic or scientific purpose or any other genuine purpose in the public interest; or

(c) in making or publishing:

(i) a fair and accurate report of any event or matter of public interest; or

(ii) a fair comment on any event or matter of public interest if the comment is an expression of a genuine belief held by the person making the comment.

These provisions remain intact in the proposed revised anti-discrimination bill.

The clear message of the Bolt case – perfectly clear to those who actually read the judgment rather than the mendacious commentary thereon – is that we should not defame others with malicious lies. 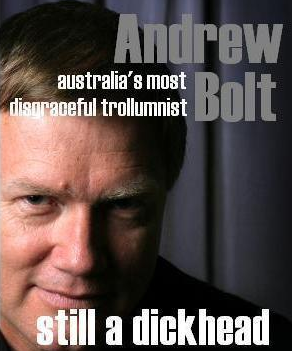 
Like all good things, freedom of expression has its limits and that is also recognised by the common law defence of fair comment. Those limits are there to ensure that freedom of expression is not abused. One of the safeguards against such abuse is that the comment must be based on facts which are true or protected by privilege.

And that is why Bolt lost. Not because of his opinions. Nor his sneering tone. Nor that his “use of mockery and derision was extensive” (para 412). But because his “facts” were just not true. Bolt simply fabricated many of his allegations against the Aborigines.

Bromberg’s key finding (para 378) was that


...in relation to most of the individuals concerned, the facts asserted in the Newspaper Articles that the people dealt with chose to identify as Aboriginal have been substantially proven to be untrue.

The judge located at least 19 distortions or lies in the two articles under scrutiny (paragraphs 351 to 413).

There may well be significant flaws in the proposed anti-discrimination legislation as presented in the exposure draft. Hence it warrants serious analysis and fair criticism.

However, fear-mongering built on concoctions and misrepresentation works against this process.