The 'appeal' of the AFP

The Australian Federal Police have told Graham Perrett they're moving on the Ashbygate matter, but yet they still don't appear to know what's going on in the courts. Ross Jones reports. 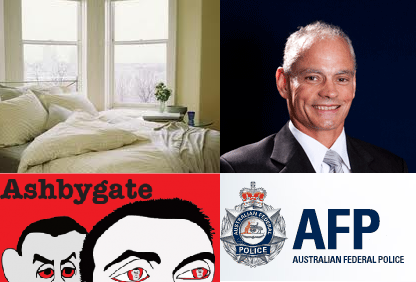 THE Australian Federal Police says it’s moving in the Ashbygate matter, but it apparently still cannot get its collective head around the difference between an appeal and seeking leave to appeal.

The matter has apparently now been assigned to Steve Lancaster, who basks in the title Assistant Commissioner Crime Operations. This at least seems like a move in the right direction.

Steve doesn’t seem to grasp an essential point when he states:

I am conscious that some of the (Rares) findings are the subject of appeal action in the Federal Court, scheduled to be heard on 2 and 3 May 2013.

Mr Ashby’s conduct is central to the overall matters alleged in your correspondence and the AAFP would be unable to effectively investigate the activities of alleged co-conspirators in isolation of Mr Ashby’s conduct.

What he doesn’t grasp is: There Is No Appeal.

It would be inappropriate and inconsistent for the AFP not to consider closely the outcome of the Federal Court Appeal proceedings to ensure no compromise of the judicial process and undermine any future investigation.

Once again….There Is No Appeal.

Below is the letter in full for your consideration.

(Note, the letter apparently took SIX DAYS to wing its way from Canberra to Brisbane — that is if you really believe it was written on 12 April 2013 and not after the IA article of 16 April 2013.) 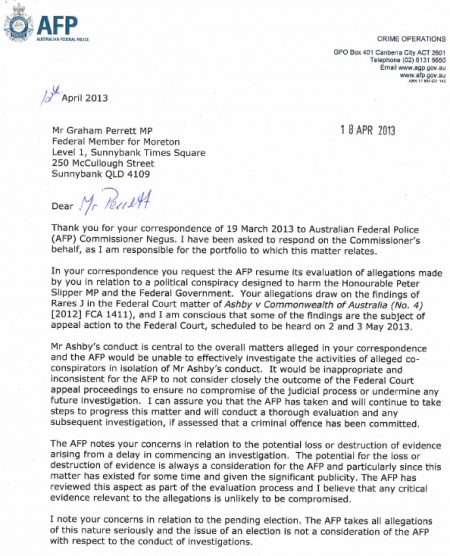 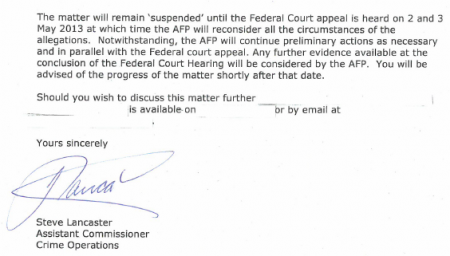 (If you're sick of the indolent attitude of the AFP and the QPS towards the Ashbygate matter, help us establish the Ashbygate Trust to get to the bottom of this seedy and sordid affair.)