The 1969 Papuan plebiscite was an Act of Coercion

The 1969 plebiscite that Indonesia used to assimilate the independent nation of West Papua within its borders, was a farce; Kim Peart says it’s time for a fair vote overseen by the UN. 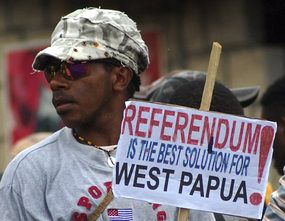 The Achilles heel, when it comes to the Indonesian occupation of New Guinea, is the 1969 plebiscite — which, according to the 1962 New York agreement, was to be run by international standards.

If the Act of Free Choice were to be held today, would Indonesia be allowed to get away with selecting 1,025 men to determine the fate of half of New Guinea, lecture them under the shadow of guns and then tell them to step over a line drawn in the dirt as the method of voting?

No women were involved. Not one.

Only when the anger of the free world turns on Jakarta and demands that the Papuan people be allowed a free and fair vote, run by the United Nations and independently observed, will the Papuan people of West New Guinea be granted the vote they were cheated out of in 1969, along with their lands and resources. In the meantime, all the national governments that allowed the Indonesian invasion of New Guinea should do what is right and offer an official apology to the West Papuan people, for letting them down so completely in their hours, years and decades of need.

Unless there is international action on the basic human right of West Papuan self-determination, the slow-motion genocide being carried out there will simply continue — and in changing political circumstances, could simply press on throughout the whole island of New Guinea.

In 1942, Australian diggers fought the Japanese invasion of New Guinea in the mud and blood of the Kokoda Track. In 1962, Australasia surrendered West New Guinea and walked away as if it had never existed; as if it never mattered.

What could have changed in a generation to turn heroes into cowards? The time to act is now.

(Read other recent articles by Kim Peart on the genocide occurring in our northern neighbour, West Papua: Slow-motion Genocide and Cry for Freedom from the Heart of West Papua.)

The death of Justine Damond and Australia's fear-based police state

The assassination of a West Papuan leader

Avoiding the fate of the dinosaurs

18 March 2012, 8:53am If the dinosaurs had built a space program, they could still be here to tell their ...
Join the conversation
comments powered by Disqus
News updates