Taylor made: Deeper into the floodwater scandal

Jommy Tee and Ronni Salt delve deeper into the business side of the $80 million floodwater purchase in an IA exclusive.

IT'S BEEN ANOTHER WEEK at the farm for your intrepid reporters and we have another little tale to tell. This time it’s about Energy Minister Angus Taylor, his other Cayman connections, his fondness for water buybacks and his dislike of anybody discussing these.

Who registered that company at the same time as Eastern Australia Irrigation? We know the name of the company was Agricultural Managers Limited — and it would go on to attempt great things.

But before its ambitious tilt at Australia’s largest irrigation property, Agricultural Managers Ltd sat there quietly in the Caymans doing not much at all. Until one day in 2009, when the water buybacks market in Australia really started to fire up. (Remember the $300 million Twynham deal when Penny Wong was the responsible minister?)

In the wake of all this new water buyback action, the offshore Cayman’s Agricultural Managers Ltd decided to act.

It set up two companies in Australia: one called Agricultural Managers Australia Ltd (AMA) and another called Australia Agricultural Securitisation Ltd (AASL). And yes, they could never stand accused of creativity.

Both AMA and AASL were registered in November and December 2009 by the sole director and secretary — one Angus Taylor.

So, just to recap, Agricultural Managers Ltd was the parent company in the Caymans, which owned AMA which then owned AASL.

Both AMA and AASL were registered with two $1 shareholdings. A good investment it seems, cheap at half the price.

Millions of dollars in Government water buybacks were now flying around. Of course, that was the purpose of establishing these companies — to trade in the commodification of water. Because in 2010, the Cayman’s Agricultural Managers Ltd popped up in the media for the first time.

They were making a bold bid to buy Cubbie Station.

In 2010 media reports, a spokesperson for the company bidding to buy Cubbie for $240 million was a Mr Angus Taylor, who self-identified as a director of Agricultural Managers Ltd, the Caymans company.

This seems contrary to claims that Taylor has made that he was only involved on the agricultural side of the businesses. A professional corporate management consultant hired for his agricultural and farm expertise.

Not, of course, that there’s anything wrong with that.

By the way, Taylor and his fellow directors were helped along in this deal by a consultancy and lobbying firm called Fifth Estate, through their consultant, Ian Wiskin. You’ll hear more about them later.

But before they had signed any title contracts, the first thing the prospective bidders AML did, was to attempt to sell 92,000 megalitres of water back to the Federal Government.

Before they had even bought the property.

Now, Cubbie Station in Queensland’s Lower Balonne has the capacity to extract, harvest and store over 500,000 megalitres of water. Even at the bargain basement price of $1,000 per megalitre, that’s a lot of helpful finance from a Federal Government with billions of dollars to spend on water.

What role, if any, did Angus Taylor have in establishing the Cayman's Agricultural Managers Ltd? He must have known the owner when he lodged the papers for its Australian subsidiaries? Who was the owner? Who was on the board?

Now, let’s fast forward to 2017 when Barnaby Joyce does the $80 million deal with EAA — a very interesting thing happens.

Information released shows that both Eastern Australia Agriculture and Agricultural Managers Ltd engaged a lobbyist firm in 2017. We know this because a 2017 Freedom of Information request for the PM&C lobbyists' register is available on the internet. And we know what you’re thinking — yes, it’s our old friends, the Fifth Estate.

From 2012 onward, AML has no apparent business interests in Australia and yet it engages a professional lobbying firm for an undisclosed fee in the same time period as EAA. And in another remarkable coincidence, Tandou, the other Federal Government $80 million water buyback deal recipients, also engaged the Fifth Estate to act for them in 2017.

The entire issue does raise serious questions that should be asked if not for one small thing — Angus Taylor and his wife, Louise, are quick to threaten legal action. This was evident when Angus Taylor’s wife threatened legal action for minor infringements on his Wikipedia page. The threats to anybody who mentions EAA and the Caymans are not as well known.

In 2014, a small Goulburn-based Facebook page was threatened with legal action by Ms Taylor for posting a newspaper article referring to Angus Taylor’s Cayman Island connections.

In turn, the newspaper, The Goulburn Post, was also threatened and had to issue an apology: 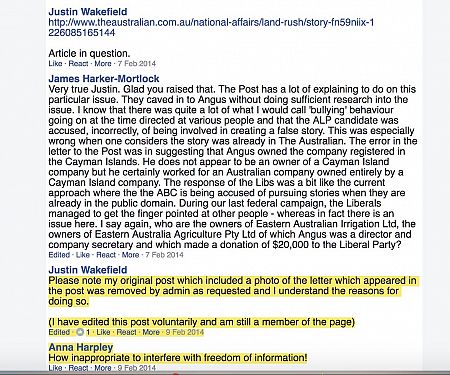 ALP candidate for Hume, Aoife Champion, once mentioned the taboo subject of Angus Taylor, EAA and the Caymans back in 2016. The next day, a staffer rang her and demanded amateur video of the event be edited to remove any mention of the taboo subjects. Yes, an amateur community video.

And it is usually the same taboo subject — Angus Taylor, the Cayman Islands and his association with EAA. This seems odd given that some journalists claim that Taylor has been completely open and transparent about his involvement with EAA and the string of interlinked companies.

This may seem reductive stuff to those more focused on carrot picking and sheep shearing, but it goes toward a pattern of a powerful man silencing people by threats or intimidation.

Huh? I deliberately did NOT Retweet the @AngusTaylorMP allegation thread because the allegations were unsourced. What’s going on, Angus? pic.twitter.com/nzVHMjAhcQ

And that behaviour has not let up to this day.

It is not defamatory to question a cabinet minister in relation to information properly the subject of public scrutiny. We are not alleging any wrongdoing. Like many members of the media, we are ordinary Australians seeking answers to questions of public importance and interest.

There are still many questions that remain unanswered. We would be pleased for anyone to answer them; Angus Taylor seems, however, to be well-placed to do so.

The company at the centre of the 'Watergate' buybacks denied Energy Minister Angus Taylor was a secret shareholder. #auspol #AusVotes2019 https://t.co/knJ6bJiQjd

Angus Taylor and Tony Reid: Joined at the business hip

Taylor made: Deeper into the floodwater scandal

4 May 2019, 8:00am Jommy Tee and Ronni Salt delve deeper into the business side of the $80 million ...
Join the conversation
comments powered by Disqus
News updates