Syrial killers! The world at war with itself

In the theatre of war, destruction and terrorism that sweeps across Syria and beyond, we must bear our share of blame and reckless conduct, writes contributing editor-at-large, Tess Lawrence.

WE ARE ALL SYRIAL KILLERS, guilty by association and the company we don't keep.

We are habitual accessories to the merciless killings before and after the fact.

In the vague and vogue jargon of academe, we are but one of the many "actors" in the armageddic infarction of murder, brutalism and torture that is Syria today.

"The Innocent Civilian" must be listed in the Dramatis Personae.

Aleppo in particular has endured constant death and destruction in this six year old vortex of madness and uncivil wars within wars.

Syria's sands and its people are daily rained upon by bombs and the blood they untap.

LIKE DADDY HAFEZ, BASHAR AL-ASSAD MASS MURDERER OF OWN PEOPLE

The chinless and heartless Syrian president, Bashar al-Assad the Younger, who ironically celebrated his birthday on 11 September, the anniversary of 9/11 has followed in his despotic father's footsteps.

First prime minister then president of Syria, Hafez al-Assad, had more of a chin than his son.

Daddy also passed down his penchant for slaughtering thousands upon thousands of his own people and, likewise, seemed happiest when doing so whilst quashing rebellions and coup attempts.

The razing of the city of Hama, so often a fulcrum of civil dissent, by Bashar's daddy in 1982 is as a mirror held up to his son.

RAZING OF HAMA AS A MIRROR HELD UP TO HIS SON

Al-Assad the Elder was not content with merely quashing a Sunni uprising by bombarding Hama with artillery fire. He called in the bulldozers to then completely flatten the city. It is now estimated he massacred an estimated 25,000 citizens, including thousands of children in what may be an historical record for a single act of singular mass murder of his own people by any leader in the region.

True to form, in 2011, his son, in whom Hafez would have been most proud, sent in the tanks into Hama in a vain attempt to quell dissent and activism.

Human beings and buildings both ancient and modern have been pulverised, bombed and strafed into oblivion, reduced to an unmendable rubble of broken hearts, bodies and mounds of stone — now the tombs of rotting cadavres and buried dreams.

ALEPPO REDUCED TO UNMENDABLE RUBBLE OF BROKEN HEARTS AND BODIES

Hatreds, not love, loiter in the air at times along with the clouds of concrete dust. Cupid's arrowhead has been replaced by the sniper's indiscriminate bullet.

Both Aleppo and Damascus are among our world's older and continuously inhabited cities.

In the treasury of our collective history, Syria is peppered with archeological sites of extraordinary beauty, importance and significance to our shared humanity, evolution, revolution and global chronology.

Now our shared inhumanity, hypocrisy and early indifference has destroyed so much of the legacy entrusted to this and recent generations.

Daily, we prove to be cruel and vindictive, malicious and violent caretakers who despite claims of intellectual rigour and breathtaking accomplishment, still resort to the barbarism of torture and war in all its babel and bibles of dialects in senseless and doomed pursuit of solving our disputes and confrontation.

Never has this been so obvious as in the tragic deflation and deflagration of Syria's national ceasefire agreement.

AUSTRALIA HAS BLOOD ON HANDS AS WELL AS CONSCIENCE

Last week, in an outrageous breach of the ceasefire, but described as a mistake, Australia was involved in a U.S. led warplane '"sortie" that killed a number of Assad's troops.

We have blood on our hands as well as our concience.

In probable retaliation, the United Nations Humanitarian Convoy, carrying food and medical supplies and essentials for Aleppo and other residents – some of them starving and boiling leaves – was bombed, destroying not only the convoy but also some of the humanitarian aide workers and others. 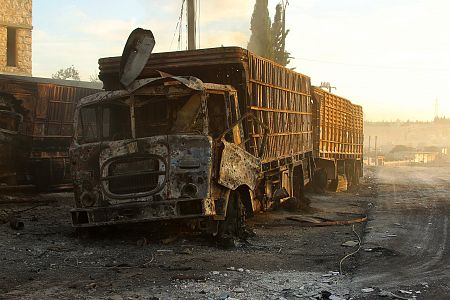 From The New York Times:

Aghast at the attack on Monday night, United Nations officials on Tuesday suspended all aid convoys in Syria, describing the bombing as a possible war crime and a cowardly act.

The suspension was announced as the United Nations was convening its annual General Assembly meetings in New York, where the five-year-old Syria war has become the organization’s most anguishing challenge.

“Just when we think it cannot get any worse, the bar of depravity sinks lower,” Secretary General Ban Ki-moon said in his opening remarks to the gathering, his last as leader of the United Nations after 10 years. Mr. Ban called the attack on the convoy “sickening, savage and apparently deliberate.”

The UN has also warned the cowards that the bombings could constitute a war crime.

If you have the strength, please view the raw footage and other information posted on the Aleppo Media Centre Facebook page.

At the time of writing, the blame game on the bombings and casefire breaches continues, becoming even more toxic with allegations, claims and counter-claims by competing "actors".

Alas, those killed and wounded are not actors, nor members of any Actors' Union. They don't get up and dust down when the hoarse screams of convulsing bombs stop or the merciless chatter of the machine guns stop their foul talk. This is real reality television; where innocents are dragooned to star in snuff movies and the pornography of rape and violence.

Making his maiden speech at the 71st Assembly of the United Nations in New York, Australia's Prime Minister Malcolm Turnbull made an eloquent and impassioned case for Australia to become a member of the UN's Human Rights Council, citing a number of issues and reasons, including human rights (natch), terrorism, Daesh, (it IS important that the PM called the so-called Islamic State by its correct name), multiculturalism, the environment, and the contentious global issue of refugees and how Australia has managed the latter, as you can read here for yourself. It was a well-written cheat sheet heavily veneered in spin and half-truths, and, indeed, Australia has much about which we should be proud. Our treatment of refugees is not among them.

Turnbull rightly spoke of not denying problems but rather of seeking to identify, address and learn from them. So far so good.

"And we will hold others to the same standard that we hold ourselves."

What has Australia had to say about the demented President of the Philippines, Rodrigo Duterte, rightly nicknamed "Dirty Harry" because of his incitement of extra-judicial executions by the citizenry upon fellow citizens they deem to be involved in the drug trade. Of course, its been a presidential decree that has simply provided an excuse for killing a love rival or for other petty paybacks and revenge.

These two have worked long and hard into the bleak days and night, searching for some signs of life of peace amidst the ruins of hope and hopelessness and the craters of despair. 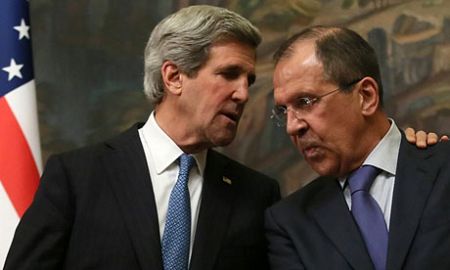 Australia in war seems to specialises in bit-parts; inevitable extras in B Grade wars directed by B Grade governments of other countries, invariably directed by those terrible twins: the United States and Britain's United Kingdom.

OUR WORLD IS AT WAR WITH ITSELF

In the theatre of war, destruction and terrorism that sweeps across Syria and beyond, we must bear our share of blame and reckless conduct.

Syria is now an abattoir for human beings, dripping with blood and inhumanity and leading innocent children and civilians to starvation, death, physical and mental injury, mutilation and amputation.

Drones, chemicals, cluster bombs and more are the sparkling bling of modern day weaponry that light up the night sky and outshine the humble light of day.

We make exquisite killers. We are our own worst enemy. We make friends of enemies and enemies of friends.

Have we already forgotten this little five-year old tacker, Omran Daquneesh, who has become the tragic leitmotif for Syria. Have we no shame? 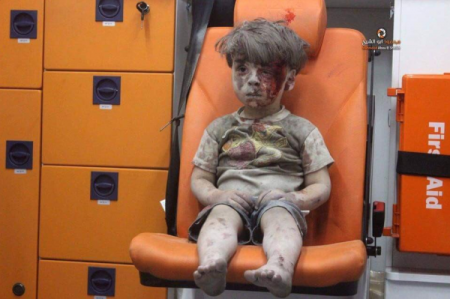 Footage shared online by the Aleppo Media Center is said to show a boy who was pulled from an airstrike on Aug. 17 in the Syrian city of Aleppo.

Our world is surely at war with itself.

All the way with the USA even when we lie about blame? Was it a 'mistake'? https://t.co/Y3hWc1dEPJ @IndependentAus