THE STRONG CHOICES advertising campaign has lied to Queenslanders about the amount of money the Queensland Budget has to pay in interest each year.

The 2013/14 Queensland Budget stated categorically that:

Yet the Newman Government has spent $6 million of the public’s money on trying to fool Queenslanders into helping compile a “People’s Budget” which has to deal with an annual $4 billion debt repayment problem.

Amazingly, the State Government is expecting to earn more in interest in its 'General Government' sector this financial year at $2.412 billion than it’s paying in interest.

It’s the same sort of deceit Prime Minister Abbott and Treasurer Hockey used in creating a false crisis for the federal budget — and we know now from figures withheld from the budget how they’ve used their lies to justify taxing those who can least afford it. 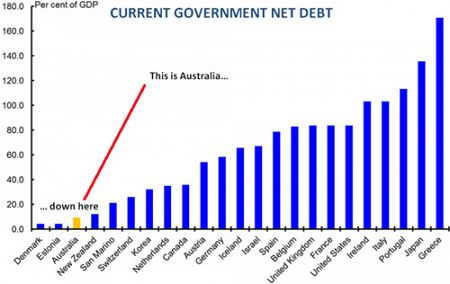 It seems logical to expect the same sort of harsh measures from Premier Newman and State Treasurer Tim Nicholls in the June 3 State Budget following their massive lies.

In order to beef up support for the Liberal National Government’s scheme to flog up to $30 billion of the public’s assets Premier Newman has conned Queenslanders that the Budget has got to fix an $80 billion black hole.

(Gross borrowings were only $37.9 billion at June 30 2013. The last Budget Papers noted that the Newman Government’s 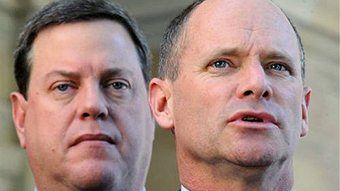 Mr Newman and Mr Nicholls have nearly doubled the figure for the debt which has to be dealt with by the Budget.

Fact: for his Budget Queensland Treasurer Nicholls will NOT be faced with cutting funding for hospital, school or roads because he has to find $4 billion from the Budget in interest payments as suggested in the Strong Choices propaganda.

The bigger the lie, the more it will be believed.

And, let’s face it, this is a whopper!

In fact, the only source I could find for insisting on this gigantic sell-off was the Newman-appointed Commission of Audit headed by Liberal Party member and former Coalition Government Treasurer, Peter Costello.

So where does this figure of $80 million come from?

The Strong Choices propaganda boasts that all the figures it uses

“are real, and drawn from Queensland’s actual finances”

But I could find nothing in the Strong Choices documentation to support the $80 billion debt figure.

There were reams of explanations about reducing costs and selling assets but there was not one sentence about the actual debt to be dealt with by the Budget.

So now the LNP want to waste more tax $ on ad campaign in Qld #auspol #qldpol http://t.co/WMn1TLGxoP via @brisbanetimes

LNP in Queensland spent 6 million on strong choices &community said no. They are still ramming sale of our assets down our throats #auspol

Strong Choices 2.0. More propaganda from the @LNPQLD and we're all paying for it. http://t.co/rKPYqwjN2D

It’s like a surgeon asking you how much of a leg you want amputated without explaining what the problem is — and when a second opinion says there’s no need for an amputation at all.

'entities such as those that operate in the energy, transport and water industries'

which are expected to have gross borrowings of $31.3 billion by June 30 this year, according to the Mid-Year Review.

And the Government’s own Budget Papers explain that these

In other words, it makes sense for these government businesses (most of which are corporations operating under the regulations of the Australian Securities and Investments Commission) to borrow money and use debt as a sensible economic option.

Moreover, these Government-owned corporations have to convince ratings agencies that their debt truly is self-sustaining.

Strong Choices could have used many figures in its propositions, including those for net debt. The last Budget Papers say:

The Newman Government was elected in 2012.

Yes, Queensland does have a comparatively large debt and it has led to our credit rating being downgraded from AAA to AA. The previous government’s Budget Papers projected dealing with this debt without selling any more assets.

And independent economic expert, John Quiggin, believes the situation is manageable without the sale of our assets which this financial year are forecast to contribute $1.7 billion to the State’s coffers in dividends and tax equivalents, after having paid the interest on their debts as part of operations.

That’s right, the types assets the Government wants to sell paid more than two-thirds of the interest bill faced by the Budget last year — and are likely to again this year.

The Mid-Year Review showed income of $44.9 billion and interest payments of $2.1 billion. My schoolboy maths suggests that is an equivalent of less than 5% — which is less than many people are paying for their mortgages.

Strong Choices blurbed that the Government

“is committed to encouraging economic literacy”

and to this end

“citizens must have access to the range of information they need”.

The Government has withheld vital information from the Strong Choices campaign and created an artificial “crisis” just as the Abbott Government did.

Three days after submitting this article to Treasurer Nicholls for a response there was no reply.

Don’t be fooled. There is no crisis.

There is no need to sell assets.

There is no need for harsh measures.

If Premier Newman or Treasurer Nicholls start talking of the need to make Strong Choices to fix an $80 billion black hole in the Budget you’ll know they’re telling Massive Lies.