Stopping the boats: A graph for lazy journalists

Lazy journalists continue to accept the Coalition’s claim that Tony Abbott and Scott Morrison stopped the boats. But the game-changer was the Rudd government's announcement in July 2013 that no asylum-seeker arriving by boat would be resettled in Australia. John Menadue lays out the facts and figures.

TONY ABBOTT did not stop the boats. But the debate proceeds, assisted by journalists who still claim that Tony Abbott stopped the boats. He didn’t.

So that my argument can be better understood, see the graph below which reveals quite clearly that there was a dramatic fall in boat arrivals from July 2013 when Kevin Rudd announced the policy that future boat arrivals would not be settled in Australia. We may argue about the wisdom of this policy, but it effectively stopped the boats. There is a current debate about turn-backs of boats, but they were only a marginal influence in stopping the flow of boat arrivals. 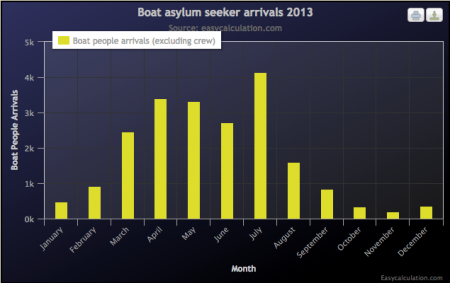 Not only did Tony Abbott not stop the boats but he, together with the Greens, was responsible for the dramatic increase in boat arrival numbers after the rejection of the Malaysian arrangement in August 2011. At that time, irregular maritime arrivals were running at less than 300 per month. That increased to over 4,000 in July 2013 when the Rudd Government acted.

Here is my original story from 8 December 2014:

The data just does not support the never-ending claims by Tony Abbott and Scott Morrison that they stopped the boats. The under-resourced and uncritical media accepts the Coalition’s line.

I will come to the recent data but, first, the evidence is clear that action by the Coalition along with the Greens in the Senate to prevent amendments to the Migration Act greatly assisted people-smugglers and boat arrivals from 2011 onwards.

The rejection of the arrangement with Malaysia by the High Court started the rot. The High Court decision may have been sound in law, but it had powerful consequences for boat arrivals. The arrangement with Malaysia needed improvement but it did provide guarantees that Malaysia had never provided before. The UNHCR was prepared to actively cooperate. When the High Court rejected the Malaysian arrangement in August 2011, irregular maritime arrivals were running at less than 300 per month. That number increased to 1200 by May 2012, and kept on rising.

The Labor government attempted to amend the Migration Act to address the problems identified by the High Court but the Coalition together with the Greens blocked the amending legislation. They bashed Malaysia at every opportunity. The failure of the Malaysian arrangement sent a very clear message to people smugglers that boat arrivals would succeed. Boat arrivals were running at over 4,000 per month in July 2013.

The action by Tony Abbott and Scott Morrison in association with the Greens triggered this dramatic increase in boat arrivals. Both Tony Abbott and Scott Morrison made it abundantly clear that they did not want to stop the boats with an arrangement such as that with Malaysia. They wanted to stop Labor stopping the boats. Their political intentions were revealed by WikiLeaks in a report by the Sydney Morning Herald in which a key Liberal Party strategist told the U.S. embassy in 2009 that

the issue of asylum seekers was “fantastic” for the Coalition and “the more boats that come the better”.

Which ‘liberal party strategist’ in 2009 told the US "the more boats that come the better”? Ironic if was Morrison https://t.co/auLCDIjSis

Action by the Coalition in the Senate triggered a large increase in boat arrivals in 2012 and into 2013.

But did Tony Abbott and Scott Morrison really stop the boats when they came to power?

The data shows that the downward trend in boat arrivals occurred from July 2013, two months before the Coalition came to power. See data below.

What largely stopped the boats, although not completely, was the announcement by Kevin Rudd on 19 July 2013 that in future any person coming by boat and found to be a refugee would not be settled in Australia. We may argue about the wisdom of that policy, but it effectively crippled the business case of the people-smugglers.

In the data above, there are undoubtedly some leads and lags and seasonal factors, but the data shows that this Rudd announcement in July dramatically cut the number of boats and people arriving by boat. The major turnaround occurred between July and August, before the Coalition came to power.

As the Abbott Government was not sworn in until 18 September 2013, its policy on boats would also have had only marginal effect on September arrivals.

One gets the sense Rudd should've held on til 2014 and said Manus, not turnbacks, stopped the boats #ALPConf2015 #auspol

So between July and September, people arriving by boat fell from 4,145 to 837 and the number of boats fell from 47 to 15. The trend largely continued after that time.

Peter Hughes, a former deputy secretary in the Department of Immigration and Citizenship, put it this way in an article in the Canberra Times in late 2013.

“The arrival of 546 asylum seekers in October and November 2013 represents only 14 per cent of the number of arrivals for the corresponding months in 2012. This is a dramatic reduction … The announcement of long-term resettlement of refugees in Papua New Guinea and Nauru by the previous government has likely been decisive in changing the decision to travel to Australia on the part of those asylum seekers who have not yet handed over their money to a smuggler.”

The game-changer was Kevin Rudd’s announcement of 19 July 2013 on no resettlement in Australia for boat arrivals. It is also likely that tighter visa procedures on Indonesia’s part would have helped reduce the number of boat arrivals. In effect, the Rudd Government slammed the door although the boat turn-a-rounds pushed the final bolt home. In other words, if there was any doubt in the minds of people smugglers and asylum seekers trying to come by boat, those doubts were removed.

The Abbott government capitalised on a trend that the Rudd Government clearly started in July 2013.

Operation Sovereign Borders has really been quite marginal and would not have been “successful” without the July 2013 decision. Navy and Customs were able to turn a few boats around. This would have been impossible if boats had continued to arrive at 47 a month as they were in July 2013. OSB has been very high profile and very expensive —  and offensive to Indonesia. But OSB has not been the main game.

As the above facts show, the game-changer was Kevin Rudd’s announcement in July 2013.

This article was originally published on John Menadue's blog 'Pearls and Irritations' on 26 July 2015 under the title 'John Menadue. A graph on boat arrivals for lazy journalists.'