Bob Ellis begs Benjamin Netanyahu to show some morality and compassion, and stop the mass murder and children killing in Gaza.

AS ALWAYS, THE LANGUAGE CONVULSES and we walk through the looking-glass into another reality.

Ten days ago, Israeli Prime Minister Benjamin Netanyahu commiserated with the parents of a Palestinian boy burned alive by ‘Israeli terrorists’; four days ago he ordered the ‘collateral’ burning to death of, so far, sixty women and children, bombed without warning at midnight because they lived near other people, some of them duly elected MPs, he wanted to murder.

He planned no compensation for the dead people’s smashed homes, nor for the interruption to the child survivors’ educations, nor their orphaning. He made no apologies for the teachers killed, the ambulances damaged, the disabled people further disabled, the ambulance drivers killed while saving lives.

Because, in Bibi’s eye, the reality is different now.

The children, the pregnant mothers, the cripples are terrorists now, or 'militants', whatever that means, or ‘unfortunate collateral casualties’ nearby, alas, when the bad guys were rightly ‘targeted’ for firing rockets, though no Israeli fatalities have thus far occurred as a consequence of those rockets.

It is now 160 eyes for no eye is Bibi’s Biblical score thus far, in accordance with God’s justice.

There's a case to be made for disproportional use of force in #Gaza, to say the least. pic.twitter.com/JRKQmSKn18

And even Obama said Bibi had a right to do this. Though Saddam Hussein was hanged for 160 people he wrongly ordered killed, this 160 dead Gazans were okay with him, with America, with NATO, with everybody in the West. On this side of the looking glass, killing children and cripples was fine, just fine; just so long as it was unintentional.

How long do we go along with this madness?

Gaza has no air force, no helicopter gunships, no tanks, few bullets and for three years has killed, or kidnapped, no Jews. Its government won office in a free election the UN warmly approved, and 40 of its MPs were immediately kidnapped and imprisoned by Israel as ‘terrorists’, whatever that means.

Yet, Israel calls itself a democracy, ‘the only true democracy in the Middle East’ — unlike Turkey, Sudan, Albania, Libya, Malta, Afghanistan — though no Gazan can vote for the Knesset that intermittently orders their country’s bombardment and MPs targeted and tortured and murdered by the great democracy — one that admirably outlaws capital punishment, having thus far hanged only Eichmann, on the other side of this looking-glass, in this fantasy world.

I beg Netanyahu to stop killing children under ten. He knows it’s wrong.

He grew up in America, where it’s widely thought wrong; in places like Sandy Hook and Columbine, very wrong.

I beg him to stop calling those wives and children killed in the same bedroom as a Gazan MP 'unfortunate collateral victims' of a ‘militant’ using these ‘innocent civilians’ as ‘human shields’.

The innocent civilians are his family. He is their breadwinner. He has a right to live with his family. They should not be killed because he us their children. He should have lawyer and a day in court — not a night of noise and blood and screaming.

Just stop this. Stop it. Now.

70% of Gaza’s fatalities are civilians -- and 30% of these are children, the U.N. reports: http://t.co/6TqaEdRvZu pic.twitter.com/vGr3d6T1se

70% of Gaza’s fatalities are civilians -- and 30% of these are children, the U.N. reports: http://t.co/6TqaEdRvZu pic.twitter.com/vGr3d6T1se 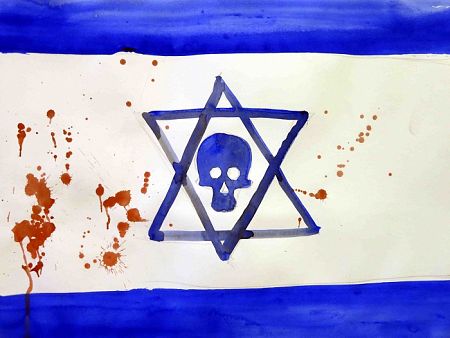