Here we Joh again! The GC Skyride and The Integrity of Mermaid Ray

A case study in how Campbell Newman has opened up Queensland for potential political corruption is the murky case of 'Mermaid’ Ray Stevens and the Gold Coast 'Skyride', writes managing editor David Donovan.

There is a stench rising in the north — and it leads unerringly back to the Newman Government, whose administration is looking more like the corrupt Joh Bjelke-Petersen regime every day.

One such malodourous case, which provides a case study in how the Newman Government has opened up Queensland for potential political corruption, is that of LNP MP 'Mermaid’ Ray Stevens and his proposed Gold Coast 'Skyride' cablecar development.

On the face of it, Stevens has an obvious conflict of interest. However, through fortuitous changes to legislation under the Newman Government, made while Ray Stevens was in the ministry, a development previously outlawed, which Stevens had been trying to float for decades, has somehow been made possible.

And through changes to the system of corruption enforcement, along with clever gaming of the Integrity Commission, Mermaid Ray looks set to make millions from a development that not only reeks of self-interest, but also has all the makings of an environmental disaster.

I have been trying to talk to Mermaid Ray about this for weeks, but he's dodging me, just like he's dodging every journalist attempting to get to the bottom of this rancid affair.

According to his website mermaidray.com.au and his Queensland Parliamentary bio, Ray Stevens, 61, is a born and bred Queenslander, birthplace Townsville. Perplexingly, however, according to ASIC records, Ray Stevens is listed as being born in Sydney.

There’s no doubting Mermaid Ray’s business links to the Gold Coast however; an accountant by trade, Stevens has run small businesses on the glitter strip since the 1970s. And he has been in politics almost as long, first being elected to the Albert Shire Council in 1988, before upgrading to become its mayor in 1994, just before the Albert Shire was amalgamated into the Gold Coast municipality. He again stepped up there, serving as Gold Coast mayor from 1995 to 1997.

This was disallowed by the then Queensland Labor Government because the

“... preferred route of Naturelink’s proponents was simply not acceptable because of the threat to sensitive ecosystems contained in World Heritage listed national parklands.”

In 2006, Ray Stevens entered State Parliament and served as a shadow minister for tourism and racing before the Newman Government was elected in March 2012. 'Can Do' Campbell could and did then appoint Mermaid Ray as Leader of the House and 'Assistant Minister to the Premier on e-government', positions he still holds. Up until now, the highlight of his illustrious ministerial career appears to have come on 11 September 2012, when he referred in Parliament to an opposing MP of Lebanese heritage as “Jihad Jackie” — something about which has refused to apologise.

On 16 September 2014, an amendment to the Nature Conservation Act was put before Parliament to allow commercial businesses to operate in national parks.

Within days, on 19 September 2014, a company called Ruray Pty Ltd was registered with ASIC, with all 10 shares listed as being owned by Stevens.

On 29 October 2014, the Newman Government passed the amendment to the Nature Conservation Act.

The next day, 30 October 2014, Stevens stood up in Parliament and declared his cable car project was back in business, announcing that not only had he invested in the $100 million project, but he would be acting as the project's advisor, as well as continuing on as an MP. On being asked in Parliament whether he wanted to be a businessman or an MP, Mermaid Ray replied "both". 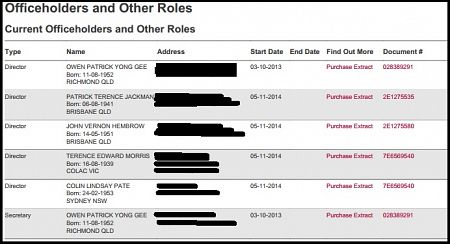 Stevens retained his ownership of Ruray Pty Ltd and its subsidiary.

THE SILENCE OF MERMAID RAY

Outside Parliament, Mermaid Ray has refused to answer any questions on this topic, including repeated requests from this publication — and there are plenty of questions for him to answer.

First off, given the the revival of the Skyride project has only been made possible after recent amendments the Nature Conservation Act, did Mermaid Ray lobby from inside Government to bring about changes to that Act? Did Stevens participate in discussion and votes in caucus or in the ministry regarding such amendments? Because, if he did do any of those things, that would appear to be outright corruption.

In Queensland, since changes brought in after the Fitzgerald Inquiry into widespread corruption during the Joh Bjelke-Petersen era, cases of political corruption were able to be investigated after referral to the Crime and Misconduct Commission (CMC). However, rather conveniently for Mermaid Ray, due to changes brought in by the Newman Government this year, the new Crime and Corruption Commission (CCC) has been stripped of its powers to investigate MPs, now being focussed solely on public service corruption.

According to barrister Alex McKean, it is very hard to see how the Integrity Commissioner could possibly have given Stevens the go ahead based on the known facts:

“It is extraordinary for person to be both a proponent and shareholder in a project and part of the government which will be considering the project. This government clearly uses a different definition of conflict of interest from that which is commonly understood, if it cannot see that the position is untenable.”

Given this prima facie conflict of interest, the advice allegedly given to Ray Stevens by the Integrity Commissioner is critically important, so where is it?

MERMAID RAY, CAN DO CAMPBELL AND THE MISSING INTEGRITY

… is responsible for providing advice on integrity and ethics issues and for maintaining the lobbyists register.

Under the Integrity Act 2009, the Integrity Commissioner can give written advice to Ministers, MPs, senior public servants and others about ethics or integrity issues, including conflicts of interest.

What it can’t do is release the advice it has given these important public officials.

In fact, it is specifically precluded from even saying or confirming if someone had received or even sought advice. In fact, the newly appointed Integrity Commissioner Richard Bingham told IA that he could be subject to a maximum penalty of a year in prison were he to breach this statutory obligation.

Not only can the Integrity Commission not speak about its advice, but it can be verballed with absolute impunity, as it can’t even correct the record when people lie about the advice they have received. And this does happen. In previous Integrity Commissioner Dr David Solomon’s 2013-14 report, he said he had been misrepresented twice the previous year by designated persons after giving advice. 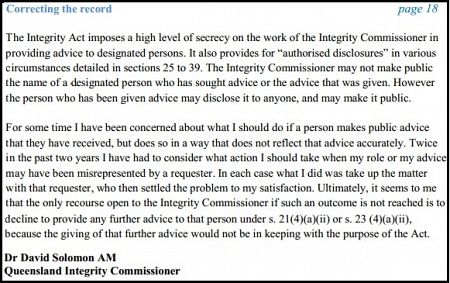 Despite this, in a press conference on 30 October, Premier Campbell Newman suggested Richard Bingham release his advice to Ray Stevens — something 'Can Do' Campbell must have known Commissioner legally could not do [IA emphasis]:

REPORTER: Given the Integrity Commissioner recently said that some MPs have been wrongly publicly quoting his advice, do you think it’s incumbent on Ray Stevens to actually release that advice so everybody can be sure that what he says about that advice is accurate?

PREMIER: Well that’s a good point, I have cited that advice, I don’t believe it’s mine to release, I don’t think that would be appropriate, but I just again say to you that it is clear that he’s received such a clearance. Perhaps the Integrity Commissioner would be prepared to make a short statement to that effect himself, that’s his call as an Independent Statutory Officer…

Commissioner Bingham confirmed this was impossible in a written statement prepared at the request of IA:

I refer to our telephone discussion earlier today, in which you sought my response to the suggestion that I should make a short statement about the advice which I provided to Mr Stevens.

I do not believe that section 24 of the Integrity Act 2009 permits me to make such a statement. That section imposes a strict confidentiality provision on me, and it does not provide for any exception even if the recipient of advice discloses the fact that advice has been provided. 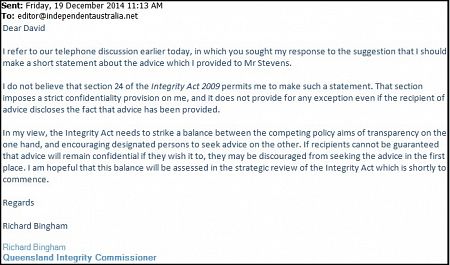 So, why did Premier Campbell Newman ask an “Independent Statutory Officer” to break the law?

But wait, it gets worse.

“The modus operandi of this government is to selectively release and misrepresent the views of others for political advantage.”

What information did Ray Stevens give the Integrity Commissioner, if any? We don’t know, because Mermaid Ray won’t say.

Ldr of Govt Business in QLD describes himself as "both MP and businessman" #spivilicious http://t.co/sLlqSEkKlU pic.twitter.com/mKZwGYZPSd

There is only one conclusion to be reached about that, according to Alex McKean:

“The only conclusion which can be drawn about the failure to release the correspondence from the Integrity Commissioner is that it does not support the claims made by Mr Stevens.”

Ray Stevens could refute this claim by releasing the advice that apparently clears him from any ethical concerns relating to the Skyride project — but he won't do that, just like he is dodging speaking to me.

This whole affair stinks to high heaven, but only adds to the growing aroma coming out of Queensland.

No conflicts of interest under the Dear Leader Campbell Newman and the glorious rule of the LNP! http://t.co/0d5f82RTnW #qldpol