The knighthood of Tony Blair has received backlash due to accusations of the former British PM being a war criminal, writes Dr Binoy Kampmark.

AWARDS AND HONOURS bestowed by States or private committees, republican or monarchical, are bound to be corrupted by considerations of hypocrisy, racketeering and general, chummy disposition. From the Nobel Peace Prize to the range of eccentric and esoteric orders bestowed each year in Britain by Her Majesty, diddling and manipulating is never far behind.

You are bestowed such things as a reminder of your worth to the establishment rather than your unique contribution to the good quotient of humanity. Flip many a peace prize over and you are bound to find the smouldering remains of a war criminal’s legacy.

Others begged to differ. Within hours, a petition was launched calling for the rescission of the award that garnered thousands of signatures. (To date, the number is over a million.) The award, says the petition, is ‘the oldest and most senior British Order of Chivalry’. 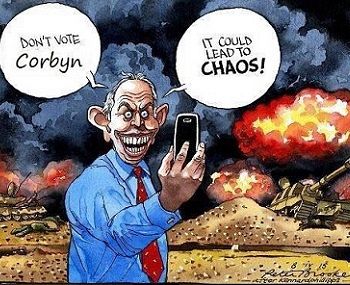 Hated by the establishment, anti-austerity and anti-war candidate for the British Labour leadership, Jeremy Corbyn, send chills down whatever passes for Tony Blair's spine. Dierdre Fulton from Common Dreams reports.

It asserts that Blair:

‘...caused irreparable damage to both the constitution of the United Kingdom and to the very fabric of the nation's society. He was personally responsible for causing the death of countless innocent, civilian lives and servicement in various conflicts. For this alone he should be held accountable for war crimes.’

The evangelical Blair of war adventurism will be forever associated with Iraq’s invasion in 2003, though most current commentary avoids his role in promoting humanitarian imperialism in NATO’s bombing of Serbia in 1999. (Never one to be too firmly attached to his ideals, Blair is currently advising the government of President Aleksandar Vučić who, as Information Minister of the Milošević regime, knew a thing or two in how to demonise Muslim Kosovars.)

The Chilcot Inquiry into the origins of the Iraq War did not openly challenge the legality of the Iraq invasion in 2003 by Coalition forces but noted that Saddam Hussein posed no immediate threat to Western states. It was also clear that peaceful options had not been exhausted.

The slippery Blair preferred another reading:

‘The report should lay to rest allegations of bad faith, lies or deceit.’ 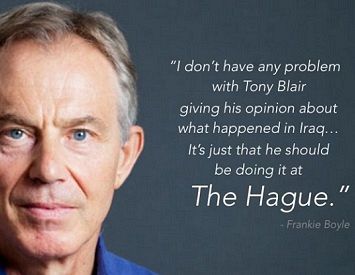 Tony Blair admits Iraq invasion's role in ISIS rise, but no apology for the lies

The man who took Britain to war in Iraq admits the invasion helped the rise of ISIS, but refuses to apologise for the lies used to build the case for war.

Sir Tony’s performance before the Chilcot Inquiry should be, for students of legal history, placed alongside that of Hermann Göring at the International Military Tribunal proceedings at Nuremberg in 1946. The latter’s sparring with the poorly briefed U.S. Supreme Court justice turned prosecutor Robert Jackson was eminently superior, but the recently ennobled one could play the trained politician wary of being implicated in past misdeeds.

Defenders of Sir Tony can be found in the ranks, all of whom essentially follow institutional logic. The Liberal Democrat leader Sir Ed Davey insisted that calls to rescind the knighthood showed disrespect for the Queen. Sir Keir Starmer, his crown as Labour leader looking increasingly unsettled, defended the knighthood as rightfully earned, Blair having “made Britain a better country”.

“Attlee, Wilson and Blair made Britain a better country, we must be the people who write the fourth chapter”

Others preferred to see Blair’s critics as incurably diseased. ‘Blair Derangement Syndrome is a curious malady,’ charges a smug Jack Kessler of The Evening Standard. Kessler’s point is sensible enough: The entire honours system is slimed and soiled, so much so that getting upset about Blair as the ‘least deserving’ of recipients is an act of meaningless stroppiness.

Consider the entire awards system to begin with.

‘From major donors to political parties to chief executives of soon-to-be insolvent banks, even a cursory glance at the history of our honours system would suggest this is somewhat of a reach.’

Kessler’s parlour room logic presumes that a person party to what was described by the victors of the Second World War as a crime against peace can somehow be equated to rewarding banksters for financial misconduct or wealthy donors. It certainly cannot be equated to King George V’s decision to make Lord Lonsdale a Knight of the Garter in 1928 in what was described at the time by a courtier as “sheer tomfoolery”.

Others are simply indifferent to the culpability of a figure who richly deserves a grilling in the dock of the International Criminal Court. (So much for the liberal international order of things, including the rule of law.) The Spectator, through a piece by Stephen Daisley, shuns the issue, merely acknowledging Blair’s shabby treatment of Parliament, his ‘unduly presidential’ manner, or a ‘New Labour project’ spun to bankrupt politics. These are deemed valid criticisms but hardly an impediment to receiving a knighthood. 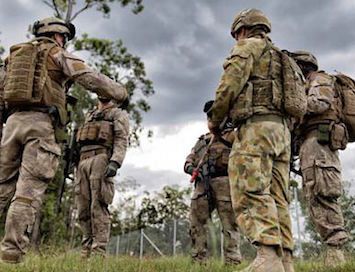 Pressure over the Chilcot Report is mounting for Tony Blair but with the ICC's powers increasing, storm clouds may also be gathering over Bush and Howard, says Dr Alison Broinowski.

For Daisley, Blair Derangement Syndrome is a condition that must be rebuffed, rebuked and repudiated:

‘Blair’s gravest sin, what he cannot and must not and will not be forgiven for, is that he won.’

He led his country ‘with moral imagination and personal fortitude and left Britain fairer, healthier, more modern and more at ease with itself’. Pity the same cannot be said of Iraq or Afghanistan.

It should be noted that this line of reasoning is entirely acceptable to a magazine that used to be edited by the current UK Prime Minister Boris Johnson and who made the Labour Prime Minister its 2002 Parliamentarian of the Year, despite him showing an utter contempt for Parliament.

Johnson declared at the award ceremony:

“It is hard to think of another party leader who, for eight years, has exercised such unchallenged dominance of the political landscape.” 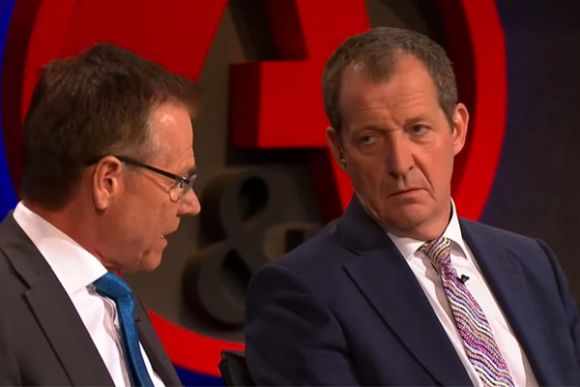 It was the classic affirmation that the Tories had, if only vicariously, won through the guise of one Blair. Johnson, for his part, publicly mused that the award could aggravate the Cain-Abel relationship between Blair and his Chancellor Gordon Brown, “all other strategies so far having proved not wholly successful”.

The justifications advanced by Daisley have been used for leaders past who made the trains run on time, built spiffy, smooth roads for vehicles (military and civilian) and ensured that everything operated to a neat schedule, irrespective of whether death camps or slave labour were involved. Many made the mistake of losing the wars they began, facing noose, poison or firing squad.

In the British context, where the benevolent, benign ruler assumes the force of majesty, the latitude for forgiveness is even greater. Reducing colonies to penury, aiding the conditions of famine, initiating social experiments that distorted and destroyed, molested and plundered extant, thriving and sovereign cultures, has never been accounted for in a court of law, international or domestic.

In the absence of a hanging judge, it has been deemed fitting that any such figures be given knighthoods and rendered into statuary instead.