Shorten Turnbull and Duncan the messenger

THE FEDERAL ELECTION CAMPAIGN is in full swing and the momentum appears to all be with the challenger.

The incumbent continues to dither along, shrinking into a role that was apparently destined to be his from birth. His latest backflip involves backing out of a brainless backpacker tax — the last foreigners he seemed interested in levying.

Meanwhile, though the media have been talking up so-called "disunity" over "border protection", like the ugly duckling, the previously dismissed and derided outsider grows gradually and ineluctably in stature.

This was demonstrated most clearly at last Friday's Sky News "Leader's Forum" at Windsor RSL in Sydney's western suburbs. While Shorten prowled around an engaged effortlessly with the questioners, who were randomly selected from the 100 "undecided" voters at the event, Turnbull appeared lofty yet bumbling; pompous yet plodding.

Sydney's mortgage belt is a long train ride from plush Point Piper. So why did Turnbull think it would be wise to clumsily attack Shorten over his plans to launch a banking royal commission? When Turnbull said Shorten wanted to "line up the banks in the docks like criminals", the crowd burst into applause. 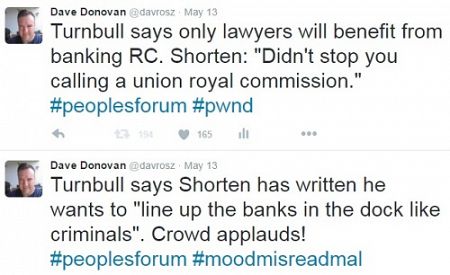 As anyone who isn't utterly out of touch with ordinary voters would, of course, expect.

Shorten ended up winning the event 42-29 among the 100 undecided voters (with 29 of them saying they still weren't sure). The lockstep media, of course, presented the debate as a draw. There was no denying, however, that Turnbull looked vulnerable.

And maybe just a little doddery. He is already the third oldest person to attain the rank of prime minister of Australia. Is he is past his best? Or did he just have a bad night? We shall see in time.

Either way, Shorten would do well to have more debates again Malcolm. Though perhaps fewer presented by Sky News, where more people will probably watch the debate inside the venue than outside it.

You may also have been following the Duncan Storrar debate this week in the media, where this low paid trucking contractor has been tarred and feathered by the far rightwing Murdoch press simply because he asked a question Murdoch's repellent quislings didn't like on Q&A.

Storrar has been so humiliated by the blanket smearing of his character from Murdoch's vile publications he has been, apparently, on suicide watch. Simply for asking a question that made some rich people feel uncomfortable.

Poor people now know that if they step out of line and ask questions that offend neo-conservative precepts of faith, such as the trickledown effect, they can expect to be burnt at the stake by a, frankly, disgraced American media mogul's monopolistic media operations.

We hope Duncan Storrar recovers from these heinous attacks. All he did was ask a question – a question that needed to be asked – and that is a right that should be available to every person, no matter what they may have done in their past.

Duncan Storrar responds to the relentless media attack which followed his appearance on Q&A. https://t.co/FLxoqlquVP