MALCOLM ROBERTS is a former Australian mining consultant who thinks the United Nations is using the “scam” of human-caused climate change as a cover story while it builds an all-powerful world government.

He’s also just been elected as an Australian Senator.

Roberts will sit in Australia’s upper house as a member of the far-right One Nation party that wants to ban Muslim immigration and investigate climate scientists for “fraud and corruption”.

Since his election, Roberts has been given blanket coverage in the Australian media, with high profile interviews on flagship shows on the publicly funded ABC.

Even the BBC has written about Roberts, with a headline: 'Australia senator Malcolm Roberts calls climate change a UN conspiracy.'

At every opportunity, Roberts, a former coalface miner, has claimed there is “no empirical evidence” to show that carbon dioxide from burning the coal that he used to dig up affects the climate.

As climate science denial goes, Roberts’ position is as far to the fringe as you can go, mixing conspiracy theories with outright rejection of the conclusions of science academies and institutions across the world that humans are causing climate change.

Australian Nobel science winner Professor Peter Doherty told me that despite Roberts’ apparent confidence that he is right and the world’s learned academies are wrong, the Senator has “no understanding of how science works”.

Much time, too, was given by the media to an odd letter sent by Roberts to former Australian prime minister Julia Gillard. The letter was written in the distinct style of  a “sovereign citizen” – the radical movement of anti-government extremists.

Roberts has denied being a “sovereign man” and dismissed the letter as a mistake. He has strongly denied any promotion of anti-Semitic conspiracies.

But in any case, Roberts’ arrival on the national scene has been irresistible in a media environment driven by clickbait and conflict.

Roberts has spent the last seven or eight years working as the project manager of the Galileo Movement — a climate science denial group launched in 2011.

But over that period, as well as developing his talking points and writing verbose reports, he has been writing complaint letters and emails to journalists, politicians and the institutions where climate scientists work.

His unrelenting harassment of climate scientists and academics working on climate change over several years (he would call it doing due diligence) is worth documenting because it points to the kind of activities Roberts might get up to now that he has been elected.

Roberts has written letter after letter — email after email — to the bosses of some of Australia’s best known scientists, often copying in long lists of politicians, fellow denialists and journalists. Roberts has posted all his correspondence on his website.

In 2015, Roberts sent formal complaints to the Vice-Chancellor’s office of the University of Queensland over the "serious corruption of science" he alleged at the hands of marine biologist Professor Ove Hoegh-Guldberg and John Cook, the climate change communications fellow at Hoegh-Guldberg’s Global Change Institute.

The complaint centred on the production of a free online course to help the public understand the rejection of climate science, which saw more than 10,000 people enroll when it was first launched last year.

Roberts also tried to engage then education secretary Christopher Pyne, who is now defence minister, with a letter demanding his department investigate Cook and Hoegh-Guldberg.

In a response to Roberts’ complaint about Hoegh-Guldberg and Cook, the university’s then acting VC Professor Max Lu wrote:

UQ has also thoroughly investigated your claims of misconduct, lack of integrity, conflicts of interest and other matters in relation to Mr Cook and Professor Hoegh-Guldberg, and have found them to be baseless.

Roberts also complained to the university about Hoegh-Guldberg in November 2010, requesting a “formal investigation” after the scientist had appeared on ABC regional television program, Stateline.

The university convened a panel to look at the complaint but found “no justification for further action”.

A wonderful response to Malcolm Roberts the temporary senator of Queensland who won with 77 votes pic.twitter.com/TC44jYuIqO

In arguably Roberts’ greatest display of overreach, in October last year, he filed a formal complaint to the Board of Professional Engineers of Queensland — a government agency charged with regulating the engineering industry in the state.

Roberts targeted three people who had given expert evidence in a court case opposing the development of the giant Adani Carmichael coal mine in Queensland.

Roberts attempted to argue that because the experts had commented on how carbon dioxide causes global warming, this constituted engineering advice the trio were not qualified to give, and so contravened the state’s Professional Engineers Act. (Essentially, Roberts was reclassifying the world's climate scientists as engineers in order to complain about them).

In a cover letter, Roberts said he hoped the board’s

finding and action will significantly contribute to safeguarding the engineering profession relying on empirical evidence and the integrity of all professions at large for the protection and benefit of our state and all Queenslanders.

“Roberts’ own brand of climate denial – a heady mix of conspiracy theories and blind spots the size of the Antarct…” https://t.co/Qu3H5J5wh3

How did Roberts’ complaint fly? DeSmog understands that after consulting the scientists, the board decided to take no action.

The same month, Professor Will Steffen, of the Australian National Univerisity, was sent a mercifully shorter missive from Roberts, who accused the climate scientist of making “unfounded false statements” about climate change.

Climate scientists Professor Matt England and Professor Andy Pitman, both at the University of New South Wales, have also been targeted by Roberts.

In one response, Pitman wrote:

'If you have already made up your mind that the climate scientists, physicists, oceanographers, most geologists, biologists, hydrologists have just made this all up, then I do not think I can help.'

In February 2013, Roberts sent one of his reports to a list of academics at universities across Australia, as well as directors at the Bureau of Meteorology and science agency CSIRO.

Roberts demanded that unless; 'by March 1st' they provided a list of 'specific and scientifically or factually justifiable' reasons why they disagreed with his findings, that he would presume they agreed with it. 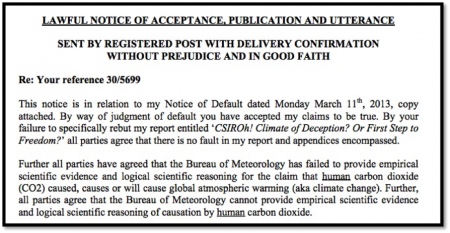 In a “lawful notice” (above), Roberts also demanded scientists and others should then withdraw all of their past claims linking carbon dioxide to climate change.

He made similar demands to journalists, who also received “lawful notices”.

Roberts has also demanded that several MPs “resign immediately” unless they could prove to him that human-caused climate change was real.

One of the academics on the receiving end of Roberts complaints, John Cook, of the University of Queensland, told DeSmog:

Beneath the public attacks on climate science, scientists are also subject to a more insidious campaign of intimidation, otherwise known as the subterranean war on science. This takes the form of complaints to universities to get scientists fired, complaints to journals to get papers retracted and FOIrequests to pick through scientists’ emails.

Malcolm Roberts was prolific in emailing complaints to The University of Queensland about my research and our course on climate science denial. As a researcher studying denialist attacks on science, I used the experience as a teachable moment - recording a video about the nature of attacks on science as well as interviewing the world's leading scientists who described their own experiences of harassment which were eerily similar to my own experiences.

It's crucially important that we shine daylight on this kind of behaviour. The public, universities and academic journals need to understand the techniques denialists employ to impinge on scientists' academic freedom, in order to reduce their damaging impact on science.

This story was originally published on DeSmogBlog.com on 11 August 2016 under the title 'Australia's New Climate Science Denialist Senator Malcolm Roberts Has A History of Harassing Academics'. You can follow Graham Readfearn and on Twitter @Readfearn.