Early last month, IA analysed ten claims by the Treasurer which were not true. That was just the tip of the Frydenberg.

All Coalition speeches and election campaign material are replete with deceptions — some subtle, others a bit technical but many quite blatant and shameless.

“Under our Government’s policies, as Josh has said, we have made our economy stronger, and will continue to do so in the future.”

The opposite is true. Relative to the rest of the world, Australia’s economy has never been weaker. On every significant measure of economic progress, Australia was at or close to the top during the Labor years. On most, Australia has now fallen to outside the world’s top 20.

“There are one point three million more Australians in jobs ...”

Technically correct, but nothing to brag about. There are now one point eight more Australian adults. Jobless rates in most developed countries have tumbled spectacularly since September 2013 through the current extraordinary global boom in growth and employment.

In 2013, 28 of the 36 members of the Organisation for Economic Cooperation and Development (OECD) had jobless rates above 5.5%. Two have increased the jobless since then — Chile and Turkey. And only one has lowered the jobless rate – to the end of 2018 on World Bank figures – by less than a third of 1%.

That would be Australia under the current Coalition. A miserable performance, given the conditions.

“Last financial year more than 100,000 young people got a job. How good’s that? An all-time record!”

Complete nonsense. Why “last financial year”? Why not “last year”, or “over the last 12 months”?

The answer is that there was a serious loss of jobs for workers aged 15 to 24 in 2016 and 17, which was followed by a brief surge in late 2017 when some jobs were clawed back. So the period June 2017 to June 2018 did show an unusual spike. This did not last. In July and August following, 48,760 youth jobs were lost again. So Morrison is being very sneaky.

The 102,600 gained in the last financial year was nowhere near the record when taken as a percentage of the youth workforce. It was a gain of only 4.72%. Both the Hawke and Howard governments fared better.

“And as the seven women in my Cabinet know, female participation is at record highs under a Liberal-National Government.”

Again, evidence of failure and neglect. This is largely the result of the hardship that has required more women to seek paid employment instead of staying on at university, or caring for children at home, or calling it quits at the normal retirement age.

“70% of our trade is now covered by export agreements, up from just 26% under Labor. And we have a plan to keep it that way.”

Trade deals are only as good as the outcomes they deliver. The data reveals exports to be an area of profound Coalition failure. The International Monetary Fund (IMF) shows Australia’s annual growth has normally been among the OECD’s strongest. In 2012 and 2013, Australia ranked sixth. In 2014, Australia slipped to 11th, by 2015, Australia had fallen to 12th and last year down to 18th.

“As we know, when Labor runs out of money, they always come running after yours.”

Untrue — as shown here last Monday with this chart, the Coalition taxes more than Labor: 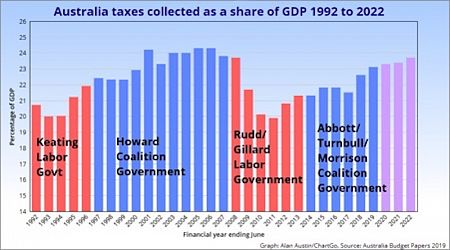 Entirely false. The average real growth in general government payments through the Labor years was 3.65%. That was not excessive, given the massive investment in infrastructure to safeguard the economy from the ravages of the global financial crisis (GFC).

The assessment of virtually all independent analysts is that Labor’s spending when the GFC whacked the world was the right quantum — well-targeted and applied fast enough to avert a severe recession.

Experts agree: Labor best economic managers... but we dont hear Main Stream Media on this... too biased towards Murdoch/LNP/IPA ??https://t.co/DvCkF9c1n7

“I want more Australians to realise the dream of owning their own home ... There were 112,000 new first home owners last year. That’s a nine-year high.”

Again, highly deceptive, if true. Spending on new homes in Australia should increase to an all-time high every year simply as a result of the ever-increasing population, plus old house replacement. Investment, according to the Australian Bureau of Statistics (ABS), has increased by an average of 9.6% annually since records started in 1975.

But over the last four years, spending on new homes has increased by a miserable average of 2.13%. During the last 12 months, of which Morrison has been PM for nine, spending contracted by 2.27%.

“Central to our plan of keeping the economy strong is our plan to keep lowering tax for hard-working Australians and small and medium-sized family businesses.”

This implies small businesses need tax cuts to survive. This is entirely false. Tax cuts only increase the wealth of those already making profits.

Cassidy: Beyond tax cuts, what is your vision?
Frydenberg: Tax cuts, tax cuts, Labor, Labor, Labor
Thanks for clearing that up Josh! #Insiders #AusVotes19 @barriecassidy @JoshFrydenberg

Businesses struggling to break even desperately need more customers, which will happen when low and middle income earners gain a higher share of total disposable income.

The ABS March 2019 figures for retail turnover per capita, just released, reveal zero or negative growth for six of the last nine quarters. That has not happened since the 1990 recession. That it has occurred again during a global boom is an indictment on the Coalition’s failure to manage even the basics of the economy.

“Our three and a half billion dollar climate solutions package is taking real action on climate change ... We will meet our 2030 targets with this clear plan we have set out.”

According to virtually all authorities, this is false.

This pattern of distortion and outright falsehoods is highly damaging to political and social discourse and should be of profound concern to all citizens of goodwill and integrity. This alone is reason to banish the Coalition forthwith.

Role of the malicious media

The Coalition won the last two elections on mendacious campaigns. Both times they falsified the record with the enthusiastic support of the mendacious mainstream media. The mainstream media again this year are not only failing to call out the Government's lies but are repeating and amplifying them.

We may revisit this theme. Meanwhile, don’t forget to vote on Saturday. Let that be a moment of truth.

.@drkerrynphelps on the Coalition campaign launch: Pretty much all of the moderates have abandoned the Liberal Party. @ScottMorrisonMP didn’t have people to surround himself with that he wanted to be associated with.

https://t.co/VzJfyTZ25m RT as so true