Our Prime Minister's religious faith has often come under criticism, which seems justified when it's linked to extremism and child abuse, writes George Grundy.

IMAGINE AUSTRALIA without religion — a modern, pluralistic, slightly drunk society united by a belief in science and human nature, whose people based their lives on the wisdom of Plato, Darwin and Penny Wong. Australia is already (thank you, God) one of the least religious nations on Earth, with over 30 per cent of its population having no religious affiliation (a number that grows each time the question is asked). So, actually, life wouldn’t look very different.

And then one day the Prime Minister said that he’d had a revelation and that from now on he would base much of his life on the teachings of a Bronze Age Palestinian cleric written in a two-thousand-year-old book he’d found.

That might be a tough one to swallow. Frankly, we might find it hard to spot the difference between Scott Morrison’s newfound beliefs and those people you see yelling outside shopping malls who make us decide to cross the street. Rational people would suggest the PM was unwell. Compassionate people would say he needed help. 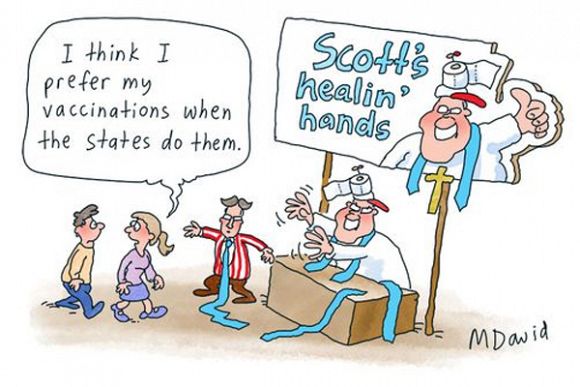 Examining the belief system and character of a political leader is profoundly in the national interest. Scott Morrison is notoriously manipulative when it comes to his private life, but a newfound belief in a bloke up in the sky might prove hard for even the spin-master to spin. Journalists would spend their nights speed-reading his new “Bible” to see what Morrison was getting into. How would we be expected to react when they found a book filled with contradictions, which regularly promotes murder, genocide and genital mutilation? How would the climate debate be reshaped if we found out that the PM enjoyed the apocalyptic verses from the Book of Revelations?

What would quickly prove problematic for the Prime Minister is the glaring inconsistencies between his beliefs and actions. This “Bible” says not to eat prawns nine times, yet the PM loves them on the barbie. Leviticus calls homosexuality an abomination. Exodus says you can sell your daughter into slavery. If you followed the Bible chapter and verse, they’d lock you up and throw away the key, so there would be some explaining to do. Even President Bartlet knew that at times the Bible is pretty close to psychotic.

Perhaps we could accept that any historical text should be interpreted through a modern lens, but how does one explain the treatment of the Murugappan family? How could Morrison match the central themes of Jesus’ life with an immigration policy built around deliberate and calculated cruelty? Jesus fed and clothed the poor; Morrison puts them into indefinite detention at facilities where sexual abuse, particularly of children, is rife. I’m no bible expert, but I’m not 100% sure that the sexual assault of kids at the Nauru Regional Processing Centre fits with the whole “what would Jesus do” mantra.

Genesis 2:15 says ‘the Lord God took the man and put him in the garden of Eden to work it and keep it’, but it’s a long bow to draw to suggest this also means God’s happy for your mining mates to dig a shit-ton out of the garden and set it on fire. Perhaps planning for the future is less of an issue for a man who also presumably believes (as do 44% of Americans) that recent Earthly events are evidence of God’s imminent judgment.

Religious or otherwise, we’re all now pretty much agreed that having 419 parts per million CO2 in the atmosphere (for the first time in about four million years) is a bit of a problem, but not, it seems, for our happy-clappy Prime Minister, who presides over a nation rapidly becoming the world’s carbon pariah. Relax, Matthew 6:34 says ‘take therefore no thought for the morrow‘, which helps put those 2050 climate goals in context. 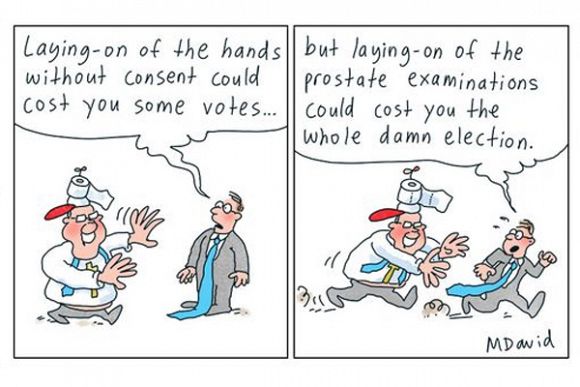 And then there’s the company he keeps. Even a secular society would have its share of kooks and extremists, but in any universe, fictional or otherwise, we’d be concerned to find out that the Venn diagram of members of the Prime Minister’s religion and a declared terrorist group overlaps significantly. In America, the QAnon cult mixes freely with evangelical Christian organisations and is linked directly to political violence. Yet it appears Scott Morrison has downplayed and refused to sever his close links to Tim Stewart, one of the nation’s primary QAnon adherents. This connection now has national security implications, as Q doesn’t particularly like election results that don’t go their way.

Perhaps we wouldn’t mind if the Prime Minister chose to celebrate his new beliefs with other deluded people, until it became clear that his “church” resembles a pyramid scheme whose founder is under active investigation by New South Wales Police for covering up his father’s sexual abuse of children. In fact, we could look at the last few decades of paedophilia revelations coming out of the Catholic Church and think that perhaps there was something systemically immoral about these institutions.

Shorn of its historical cloak of legitimacy, we might see Scott Morrison’s beliefs for the immoral horror show that they often are and Australia might wistfully wish to once again have a leader with basic human decency. Someone who knew right from wrong in their heart rather than by interpreting laws they often wrote themselves and cherry-picking religious texts when the moment suited them.

We’re all entitled to our beliefs and values, but not all of us mix in the shadows with dangerous extremists and few of us use our beliefs to justify the torture of young children. In a world without religion, Scott Morrison’s belief system would cause us to ask profound questions about his character and fitness for office. It might just make us believe in the Devil.

19 December 2021, 8:00am When thinking about next year's Federal Election, Australians should consider the ...

1 November 2021, 11:00am President Joe Biden is attempting to enact his legislative agenda in the face of a ...

23 September 2021, 12:00pm The Coalition's decision to tear up a deal with France is a masterclass in fail ...
Join the conversation
comments powered by Disqus
News updates