SUBSCRIBE   DONATE LOGIN SHOP
SUBSCRIBE   DONATE
Why a Murdoch media royal commission shouldn't happen ─ at least not yet
Where's Albo? Not on holiday with Dutto and ScoMo
Get a Mark David T-shirt!
KERRYN PHELPS: COVID is not over!
Help IA speak truth to power! Subscribe NOW
Politics Opinion

Public relations has trumped public health as the Prime Minister targets the AstraZeneca vaccine as a scapegoat to shift blame from his own incompetence, writes Paul Begley.

ON FRIDAY 17 JUNE, the Melbourne Herald Sun ran this headline across the middle of its front page in bold caps: ‘FLIRTING WITH DISASTRA.’ The subheading was also reported in bold type: ‘Vaccine jab wait blowout looms as AstraZeneca ditched for ages 50 to 59 amid blood clotting fears.’

What might seem like a typically rudimentary tabloid pun was arguably the playing out of a well-planned public relations strategy.

The news story appeared to be linked to the “shock move” of the Federal Government on 16 June advising the AstraZeneca vaccine was now the vaccine of choice for people over 60 years of age, thereby amending the earlier April advice that the vaccine was recommended for over 50s.

The PM's announcement on 8 April told Australians what was already known. Reports had been appearing in the European press for some months about a rare but potentially serious blood clotting side effect related to the AstraZeneca vaccine with an incidence rate of around 4-6 cases in a million. The PM's hastily-called press conference added no new information other than to transform that fact into a strident alarm bell endorsed by the Prime Minister himself and his top health bureaucrat, Dr Brendan Murphy.

Dr Murphy had not long ago been promoted to the job of Department Secretary, raising the perception that his adeptness at bestowing on the PM’s political agendas the authority of a senior medical practitioner had paid dividends. 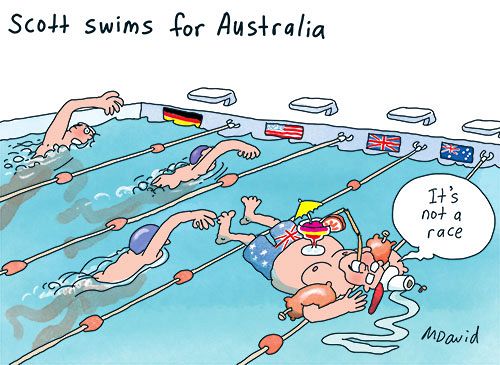 Unlike other vaccine rollouts, which are administered by the states, the Morrison Government's COVID vaccine rollout has been distributed by Liberal-aligned private companies.

The advice that triggered the April announcement was backed by the Australian Technical Advisory Group on Immunisation (ATAGI) and it had the effect of tempering the advice previously given by Australia’s Therapeutic Goods Administration (TGA) that AstraZeneca was effective and safe for emergency use as a vaccine during the COVID-19 pandemic.

ATAGI consists of 15 highly qualified medical specialists co-chaired by epidemiologist Professor Allen Cheng and infectious diseases microbiologist Associate Professor Christopher Blyth. ATAGI can safely be regarded as an independent body. That said, it is just an advisory body as its title indicates and is overseen by Murphy who in turn takes his marching orders from Health Minister Greg Hunt and Prime Minister Scott Morrison.

Whether the ATAGI met under its own steam to trigger the emergency press conference of 8 April is an open question. Their meeting on the blood clot issue may have been convened independently by Professors Cheng and Blyth. Alternatively, advisory groups typically meet if they are prompted to do so by the person who oversees them — in this case, Murphy. They may also be asked to consider particular agenda items. The ATAGI members could have easily agreed on grounds of caution to recommend that an alternative to AstraZeneca would be best given to people in younger age groups, consistent with the data available in the short period during which the vaccine had been administered in Europe.

The ATAGI would bring to its independent deliberations a degree of professional risk aversion based on many aggregate years of clinical and research experience. There is every reason to conclude that their advice was backed by disinterested expertise but no reason to assume they would have known precisely to what use their advice might be put.

ATAGI members would have likely been conscious that their advice would be used as an exercise in apparent transparency to warn members of the public that an AstraZeneca jab carries known risks, however slight those risks may be. The ATAGI members are unlikely to have been made aware that the advice would be used as part of a strategic PR plan that had two political outcomes. Firstly, to bring its authority to an issue of such magnitude that the Prime Minister himself calls an emergency press conference on 8 April to announce the warning and deems it of sufficient gravity to interrupt evening prime time television across the nation. Secondly, it raises to an alarm level the well-known information about the AstraZeneca vaccine that has the effect of undermining public confidence in it among all age groups, not just those younger than 50 years of age. 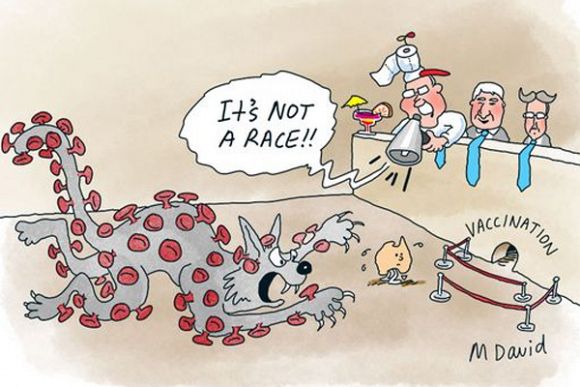 In case the Australian people didn’t get that message on 8 April, the further announcement on 15 June turned the screw. That announcement was stage two of the same PR message, now operating to squarely focus public attention and blame on AstraZeneca, and away from any other relevant matter.

The critical other matter has to do with the supply of alternative vaccines, especially the Pfizer vaccine. The timing of the April emergency press conference coincided with the realisation by the Morrison Government that it had significantly under-ordered the Pfizer vaccine during 2020 and the further realisation that the Prime Minister’s triumphant announcements of last year were in jeopardy, namely that his Government had “secured” massive supplies of vaccine and we were first in line for a vaccine rollout that would inject 4 million arms by the end of March.

By 8 April, the March date had come and gone and Australia had barely succeeded in vaccinating 600,000 citizens. To make matters worse, the Federal Government had seriously blown its negotiations with Pfizer and we were limited to what they were prepared to offer, which was 10 million doses — way short of the 40-50 million asked for. The ABC’s Dr Norman Swan, an early critic of AstraZeneca himself and an advocate for the merits of Pfizer and Moderna, suggested that the PM had upset the Pfizer people during negotiations and they had stopped talking to him.

The PM’s announcements towards the end of 2020 made it clear that the vaccination rollout was a federal program for which Morrison would claim full credit. That was not contested by the state premiers, though they expected to be included in the program the way they usually are in distributing vaccines. On this occasion, vaccines were to be distributed through private clinics and GPs so constituents could see the glory of the rollout was all Morrison’s work. But by the middle of March, it was looking less like glory and more like a monumental stuff up. The ordering problem was not recoverable and many hopeful recipients of the vaccine were discovering they could not book a jab at their GP clinics and were being told there were supply problems.

One option could have been to come clean with the Australian public and let them know about the supply issues. That would have been difficult because of the bold 2020 announcements about massive vaccine supplies having been “secured”. Besides, the Government had thrown most of its eggs in the AstraZeneca basket and now a shadow had been cast over it. So a PR decision was made to transform the shadow into a crisis, the critical message being that the crisis was not of the Government’s making. In the right hands, enough confusion could be created to shift blame to the faulty vaccine and the states, most of which were run by Labor premiers.

Hence the 17 June front-page Herald Sun narrative: ‘The shock move is expected to slow the rollout for several weeks with the Pfizer supplies significantly stretched, especially in Victoria’, while adding ‘doctors were reporting on Thursday that they were already getting cancellation calls’ from the 840,000 people who were due for their second AstraZeneca jab.

The washup has been to signal to the Herald Sun reader in the suburbs that the Pfizer shortage is a problem caused not by the Federal Government’s incompetence, but by the inadequacy of the AstraZeneca vaccine itself. The Morrison Government could say it behaved in exemplary fashion by exercising ostensible duty of care in warning people of the risks. Thankfully, by undermining the vaccine in the process and creating a very real hesitancy, it has also reduced demand for it.

The Herald Sun story invites its readers to conclude that AstraZeneca is exclusively to blame for the slow rollout with a bit of mud thrown at Victoria because demand for vaccines has been strongest in that state following a recent two-week imposition of tough restrictions. Acting Victorian Premier James Merlino stated unambiguously during those restrictions that vaccination rollout is a federal issue, that supplies to Victoria are problematic and that timely vaccinations are the key to preventing further lockdowns and getting the economy moving.

Because neither the Merlino perspective nor the Morrison Government’s procurement failure are part of the Herald Sun narrative, Federal Health Minister Greg Hunt has been able to announce that the vaccine rollout is “on track” for the end of the year, thus jeopardising the hope of confidently opening the economy, resuming international travel and keeping the virus contained over winter and spring.

Complaints from state premiers about outbreaks and vaccine issues are put back on them and their fear of the virus is questioned as somehow excessive, thus weakening the resolve of their constituents to comply fully with responsible public health restrictions on movement and association, also to weaken the premiers’ resolve to remain firm on compliance and enforcement to circumvent an outbreak. Businesses also blame state premiers who impose restrictions that affect retail, travel and hospitality, while the Federal Government talks down restrictions and the PM sounds like a heroic advocate for freedom and prosperity, not unlike Trump did in the U.S. and Bolsonaro is doing in Brazil.

A coronavirus outbreak in NSW that necessitates a lockdown could upset Morrison’s PR plan because NSW’s refusal to impose strict curbs on freedom so far has earned it the gold-standard stamp of approval from the Prime Minister. Whether PR trumps public health over the coming weeks and months remains to be seen, but the Herald Sun is backing the PM’s “freedom” narrative and is firmly in the PR camp opposing state government restrictions, though always with a readiness to move swiftly to damning the same government for being weak on compliance and enforcement if freedom and complacency lead to an outbreak.

Paul Begley has worked for many years in public affairs roles, until recently as General Manager of Government and Media Relations with the Australian HR Institute.