Yesterday’s Morgan poll (Labor 52-48 2PP) shows Abbott has lost some things that, even in the week of the visit of a future king to his beach and a game-changing deal with Japan, can’t be got back. 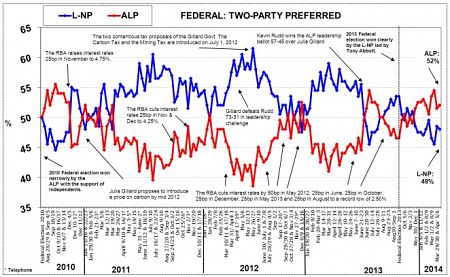 This means, must mean, that the Kevin07 votes are back and the relaxed and comfortable Howardista vote has been smashed, once again, by...?

Gonski, NDIS, Medicare, the ABC and the Old Age Pension they swore would be protected, are being trashed. The anxiety of the carers of the disabled, and everyone has a disabled relative, though gone for a while, is now sadistically restored. And the mistrust women, especially, feel for Abbott (he abandoned his pregnant bride-to-be and made her give up her newborn baby) will not now, ever, be allayed.

But there’s also, I think, a ‘cock-up’ factor in play as well.

A sea-search for a crashed plane for six weeks has turned up nothing — not even a floating passport. Money that has been spent on this search could have saved Holden, and a quarter of a million livelihoods.

Amid calls for ‘shared sacrifice’, we learn that Assistant Treasurer Senator Arthur Sinodinos got a quarter of a million dollars for fifty hours work and was promised twenty million more.

Amid boasts that ‘the adults are now in charge’ and ‘leadership stability’ was now the go, the Liberals changed premiers in Victoria, New South Wales and Northern Territory and sacked the Treasurer ‒ a former leader ‒ in Western Australia.

Attorney-General George Brandis has come out for bigotry (88% of Australians think this is crazy) and called climate science ‘medieval’. Cory Bernardi has compared gay men with ‘beasts’ and Education Minister Christopher Pyne wants to write colonial brutality out of our history.

And it’s hard to overturn the perception of a sackful of struggling cats in a river.

Bronwyn Bishop is already most lunatic Speaker in our history.

Treasurer Joe Hockey’s quest for a surplus seems more and more a tilt at windmills, or the unleashing of a loaded dog.

It’s not, though, easy to know what to do with all this.

Manus is tricky. The surplus has eluded better Treasurers. The ‘direct action’ absurdity has been gazumped by Palmer...

What could be done is a ‘save ABC drama’ campaign in a year when ‒ although at its best and selling as never before overseas ‒ it is marked, nonetheless, for Hockey destruction. Roxburgh and Blanchett could address mass meetings, Micallef, Biggins, Amanda Bishop do a sketch on YouTube.

A ‘save Medicare’ campaign, too, would have no enemies. Bill Hayden, Bob Hawke and even Gough could be part of it.

On Anzac Day, it should be noted that dead soldiers’ children are being dudded of their money, and traumatised veterans thieved of their disability pensions, probably, if the droid Erich Abetz has his way.

There are things to do before the Budget sinks Hockey’s credibility and Abbott’s honesty once and for all. Not least of these is to assert that the Opposition continues to be ahead, in all the polls, unchangingly.

And the Coalition is in ‘leadership turmoil’ and fighting ‒ as always ‒ like cats in a sack. 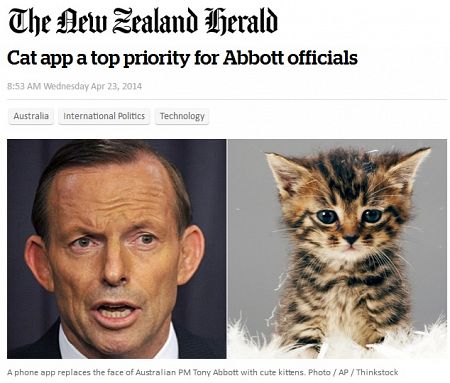 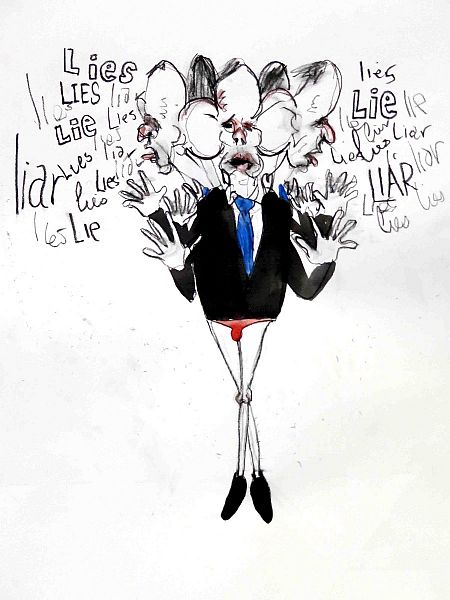