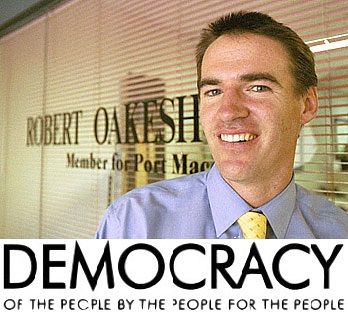 Federal Independent MP Rob Oakeshott has had a tough time of it since he decided – after a torturous 17 minute speech – to throw in his support for the Labor Party and enable it to form a minority Government last year. For this, he has incurred the wrath of some in has conservative leaning Port Macquarie electorate, the ire of shock-jocks, the enmity of News Corp and has been targeted by ‘Beetroot’ Barnaby Joyce, the almost unintelligible carmine-faced LNP senator from Queensland. There has also been the predictable rumblings in the community about the desperate need in Australia for Party A or Party B to utterly control Parliament and not need to appeal to the cross-benches to pass legislation — as happens in almost every other proper democracy in the world.

But, to hell with all of them — as far as Independent Australia is concerned, Rob Oakeshott is a standout Australian politician. For his stance on the NBN, which IA thinks is essential infrastructure for Australia’s future, we applaud his vision. For his support of climate change action, which we believe is essential for the world’s future, we laud his responsibility. And for his support for Constitutional reform on such topics as Indigenous recognition and an Australian Republic, Independent Australia nods its head vigorously.

But it is about democracy and party politics as declared in Oakeshott’s recent interview with Professor John Warhurst in The Conversation, where Oakeshott and Independent Australia – the Australian journal of democracy and identity – is in most furious agreement.

On the issue of representative democracy, Independent Australia believes that there is a fundamental conflict between representing a political party and representing an electorate.

“Democracy is said to be government for the people by the people and Australia has a system [of representative democracy] that could satisfy this definition….Unfortunately, in the main, [it doesn’t]….[I]nstead of our politicians representing the people who elect them, their first loyalty is to their party.”

“I was a member of a political party… but I found it difficult to run on to the footy field with two jerseys on – one being a political party, one being community…[It] really is a bit of a counter push to political party thinking, place-based thinking is very much about trying to empower local communities. So it’s taking the model of an independent member and getting elected by 90,000 people and their lovely support and then weighing up issues on their merits.”

And we stand firmly with Rob Oakeshott in a shared abhorrence for strict party discipline and the way it corrupts and limits the free exercise of democracy:

“…politics is about the fight, it’s not behind closed doors, it’s on the floor of the parliament.…giving some people who have good ideas freedom to express them on the floor of the parliament rather than playing this traditional game of so-called party discipline which is, in my view, almost treasonous. You are denying someone the opportunity to express their views on behalf of their constituents.”

And, most critically of all, on the issue of political parties and vested interests, Rob Oakeshott echoes the views of Independent Australia that political parties are subsidised by powerful interests because they are convenient, efficient, conduits for their influence:

“…what is a political party today? It’s a vehicle for vested interests to control agendas. That’s why so much noise in the [current hung parliament], so much noise is coming from those traditional vested interests. Because it is normally very easy for them to talk to the Treasury benches when it’s a majority government, one way or the other.

“You can talk to half a dozen people and hopefully have some clear direction and some certainty, but also some confidence that you’ll get what you want.”

“The fact that only one of two parties, generally, is able to take power makes it easy for systemic corruption to occur. Those with an interest in working the political system for their own benefit only have to sink their tendrils into one or both of the two major parties and they are certain to have gained significant, yet unelected, influence. This is done quite easily, and even legally, through major party political donations.”

For your outspoken support of representative democracy in which politicians represent the people of their electorate, rather than a corporate political party run by anti-democratic vested interests, Rob Oakeshott is our “Democrat of the Month”. We hope that his electorate will reward him at the ballot box in 2013, or whenever the next election is held.