Reza Berati's death diminishes us all

Until Australians accept that we should be helping, not harming, those who are fleeing persecution, nothing will change, writes Lyn Bender.

A YOUNG MAN has been brutally murdered. A Minister responsible for his safety is in denial about his negligence. A prime minister praises this minister as a strong, decent, sterling protector [of borders] — who is not a wimp.

Today, it emerged that Morrison knew a week ago that the information he initially gave about Berati being murdered outside the compound was wrong, but he refused to correct it until Saturday night. Why? Secretive Scott won't say.

I am too upset to write; but too outraged not to write.

I had decided to take a break, from my vocation as a citizen journalist.

But I can’t take a holiday from being a citizen. As I write this I am quivering inside with rage and despair.

The death of Reza Berati, must be on all our consciences. It is an unpardonable atrocity.

When writing for a conventional publication, I am conscious of the inner censor that comes into play. What can be said, what must be omitted, or skirted around. When I am interviewed on common psychological concerns, such as relationship therapy, I am sometimes instructed to "keep it light".

But there seems no way to speak of the Manus violence – and of asylum seeker, Reza Berati’s murder –­ with sufficient gravity and horror. Yes I know, we have been there many times already It’s déjà vu and groundhog day combined.

From 2002 to 2004, I gave many interviews to the media during the six weeks that I was employed as a psychologist at Woomera Detention and Reception Centre. I was, in effect, a whistle-blower. The media wanted the truth; but it seemed impossible to enunciate the horror of detention, with sufficient emphasis.

I spoke of asylum seekers daily self -harm, suicide attempts, and hunger strikes. There was catatonic depression; children aged three and ten attempted suicide; the tally was shocking.

So Woomera was ‘mothballed’. But the corrupting virus of detention, lived on.

In  2007, the Howard Government was voted out. The new Rudd Government, set about dismantling the Pacific Solution.

That was then and this is now.

Under Julia Gillard and Kevin Rudd, and on through a frenzied election process in 2013, the policy on refugees became harder, tougher, more cruel and far more ruthless. Fearing the loss of power, the ALP had set up the Nauru and Manus deterrence horror.

The triumphant newly elected Abbott Government, methodically set about to perfect this diabolism. They would be crueller, meaner harsher and even more inhumane than any previous government.

At any cost, financial, moral, or spiritual, the boats would be stopped.

With the murder of Reza Berati, a line has been crossed.

A definer of a free, moral, nation, has been crushed. We killed a person who had come asking for our help.

The reports are seeping out, like the blood of the wounded. The bodies cannot be hidden ... or can they?

What care are the reported 70 or so seriously injured receiving? And for trauma and  counselling? Well, the minister assured us that breakfast was still being served. I repeat breakfast is being served, announced Scott Morrison, as testament that order is restored after a night of horror.

Luckily, "there has not been very little damage" declared Abbott, speaking about the detention centre, ignoring the humanity.

There are still many unanswered questions. 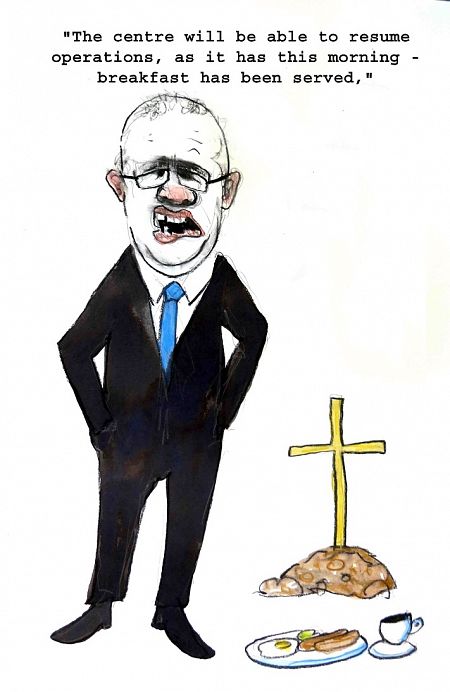 Are the people who administered the discipline and violence still wandering around the compounds? Are the perpetrators serving breakfast?

Of course, we can’t know anything much for certain, because it is all an operational matter.

The ABC reports that a former Sri Lankan military officer, Dinesh Perera, is now acting operations manager of Manus Island detention centre. Given that there are currently 30 Tamil refugees at Manus, this is akin to appointing a former German SS officer to oversee Jewish refugees who have fled Nazi Germany.

It would be a farce if it weren’t so cruel and mindless.

What we do know is that unspeakable violence has been visited upon an already vulnerable and traumatised people.

If those who survive escape long-term post traumatic stress disorder, I will be amazed.

If they do, we should study their resilience. Research findings could be applied, to protect those who suffer extreme catastrophic events or war.

But that is unlikely. None of the survivors will, or could, receive appropriate emotional care in that hellhole.

But Australia is not in the business of protecting the vulnerable anymore.

Somewhere in an attic, an Oscar Wilde picture of Dorian Gray – our Australian moral soul – is becoming gnarled, twisted and distorted. Morrison and Abbott are trying to hide the corruption, but it is now there for the world to see. Even China and Iran – and, of course the UN – have noted and criticised Australia’s brutality. It has even been reported in the New York Times.

Isn’t that what the Abbott government wanted?

"Tell your friends and families and others not to get on boats, They will not be settled in Australia."

Thus did Morrison lecture and harangue his audience of captive detainees at Nauru.

Late on Saturday night, so that it could not be reported in the Sunday papers, Morrison conceded in a press conference that the ‘riots’ at Manus had occurred within the compound. Reza was not killed outside the compound by angry locals, because he was outside the "protection" of the centre as he had first claimed.

Let’s examine what this means. Vulnerable people, forcibly detained, with nowhere to run, were assaulted with guns and knives. Some are reported to have hidden in their rooms, but this afforded them no protection and guards and vigilantes dragged out from their rooms and delivered them ferocious beatings.

It is reported that the body of 23 year old Reza Berati will be sent back to his family. Yes, he was someone’s son.

But they should be accustomed to that in Iran. In corrupt, despotic regimes, the disappeared are often returned battered and broken to their families for burial — but without apology or condolences.

Will Reza’s body be returned to his family – conveniently for Morrison – after a hasty autopsy in Papua New Guinea. Who will ensure its integrity?

Nor will there be a truly independent inquiry. All the protagonists will be investigating themselves.

The Human Rights Commissioner Gillian Triggs has been denied access to the detention centres, despite repeated requests to do so.

Scott Morrison has expressed sympathy to the family.

Somewhere buried in his unconscious mind, Morrison has recalled snippets of civilised discourse, when condolences were expressed. A time when people were not just numbers, transferees, or so called  ‘illegal’ boat arrivals.

There were candlelight vigils on for Reza across Australia, last Sunday. Over 15,000 attended calling for Manus and Nauru to be closed.

But calls for ending the abhorrent policy will most likely go unheeded. Both parties share the guilt of its creation.

The Labor Opposition will not oppose much, except for the minutiae of administering this abhorrent policy. Morrison is holding firm, refusing to dismantle Manus.

But even dismantling Manus and Nauru will not fix the suppurating sore that is Australia’s bipartisan  policy on refugees. As in the Greek myth of the many headed hydra, new and more ghastly versions of refugees ‘solutions’ re-emerge. Dismantle one and more refugee dumping grounds are found.

Foreign Minister Julie Bishop has just returned from shaking hands with her counterpart in Cambodia. A new deal is being brokered with a poor struggling nation — this time on that has barely emerged from mass brutality and murder. The Abbott Government is now hoping to ship refugees to Cambodia. Despite being a signatory to the Refugee Convention, impoverished Cambodia still has a poor human rights record.

Until we recognise that we should be helping, not harming, those who are fleeing persecution, nothing will change. Until we stop persecuting the persecuted, we will continue to have a problem of our own making. We will continue to lose our integrity. Human rights will be sacrificed and people will suffer and die.

The answer is so simple.

All we have to do is to honour our human rights obligations, and to welcome refugees. 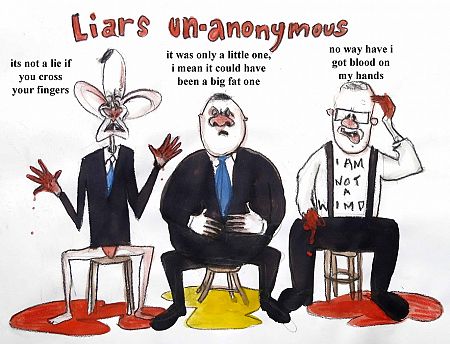