The Morrison Government could use the proposed Religious Freedom Bill as a political weapon against Labor in the upcoming election, writes Andrew P Street.

CULTURE WAR! Huh! What is it good for? Another term in power, potentially.

On the face of it, the Scott Morrison re-election strategy is based on two things: one, the message that the Coalition are the people to trust with the economy and secondly, waiting until the absolute last minute to be dragged unwillingly to the polls in the desperate hope that everyone forgets literally everything that happened over the last three years.

And those are smart tactics in the absence of anything like a good track record from their time in power.

After all, Morrison’s always been about putting off making any decision about anything – a federal ICAC, investigations into sexual crimes in Parliament under his watch, action on climate – in the hopes that it would either go away or be someone else’s problem. So hey, why stop now? 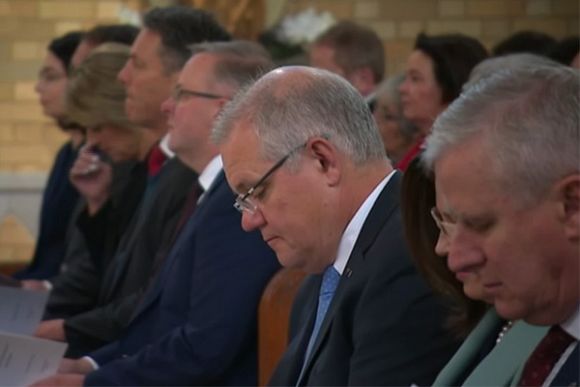 And the current indications are that the plan is to re-run the successful 1994 “the Coalition is good with your money and Labor will just spend it heaps badly” campaign, mixed with the dash of 2016’s “hey, coal industry, only we truly understand you” flavour.

The problem with those campaigns is that they’ll be easy to demolish in 2022. The greatest budget deficit ever might be justifiably waved away in the face of a global pandemic, but it’s harder to argue the Government was doing what needed doing when already-profitable companies were the ones making off like bandits from JobKeeper, while Labor is already pointing out that the Government’s coal-to-green hydrogen transition plans are the exact ones Morrison was calling ridiculous when Labor spruiked them last time around.

So on the face of it, this is a weak campaign to base hopes of a return upon. But there’s another way for a Coalition Government to win re-election — start a culture war.

And there’s a mighty legislative weapon just sitting in Parliament, waiting to be unleashed to that effect. It’s called the Religious Freedom Bill and its entire purpose is to fire the shot that begins a Republican-style battle for the political soul of the nation — specifically by forcing Labor to either betray the Act’s likely victims (trans folks, women that want control over their own fertility, the LGBTIQ+ community) or to be painted as godless heathens who hate people of faith. 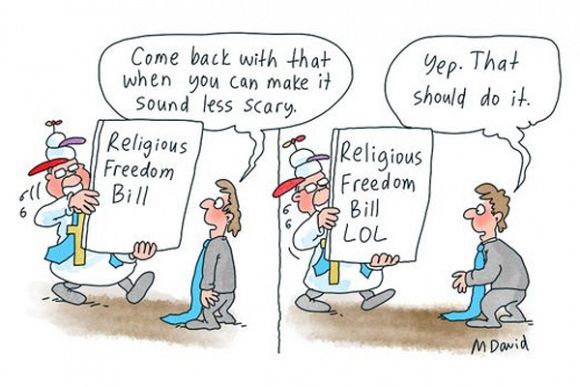 In an era where religious importance is on the decline, it's only conservatives and the hard Right who are still pushing for religious discrimination.

A since-deleted broadcast by Vision Christian Radio with the Australian Christian Lobby’s managing director Martyn Iles suggested that the ACL approves of the Bill, which is in itself an indication that it’s likely to be filled with laws with which to beat The Gays.

That supposedly includes a “Folau clause” which would make it more difficult to discipline someone for expressing a religious belief, no matter how odious or offensive, while also giving employers the right to expect employees to adhere to conduct in keeping with their religious precepts, anti-discrimination laws be damned.

Not only is there opacity over what horrible injustice the Bill would seek to remedy, other than hurt feelings over not being able to prevent marriage equality, there’s also no clarity on how to resolve the problems the law would appear to create.

If you’re a teacher in a private school, does the Act mean you’d better not bring the same-sex partner out in public lest a homophobic parent or principal with a grudge decides you offend their personally held beliefs? If you’re an aged care worker in the 40 per cent managed by charities, could you be sacked after being outed by a colleague that discovered you terminated a pregnancy because you couldn’t afford another kid? What happens if a bank sponsors a Pride event and one of the tellers decides to let all their customers know sodomites will burn in Hell?

The Morrison Government has no plan to solve these problems because they’re not problems for them to solve: they’re glorious opportunities to paint their political opponents as being anti-religion the second they bring such problems up.

Finally, Morrison’s much-discussed religiosity becomes an asset rather than a liability since any suggestion that he’s using it for base political reasons is easy to spin as an attack on his faith. Sure, Labor leader Anthony Albanese is a lifelong and vocal Catholic, but that’s not going to matter if he’s painted as fighting against the right of Australians to live God’s truth, or something.

Thus the plan will be to create a bill so flawed as to defy passage through Parliament, then paint all opposition as being woke secular religion-bashing. Labor will be forced to spend time and oxygen defending its position while Morrison will ooze wounded pride on behalf of the Australians of faith being denied their freedoms. What specific freedoms? Who cares?

Now, it’s worth adding that a number of Liberal MPs have reportedly expressed a great deal of discomfort with the Bill in its current form, particularly those who campaigned in favour of same-sex marriage such as MP Warren Entsch, Senator Dean Smith and MP Tim Wilson, so there’s a possibility there wouldn’t be the numbers to get it through the House of Representatives. But that’s arguably not the goal of the legislation — it’s about starting a fight, not changing the law.

It’s cynical, it’s dirty, and it’s divisive. And it might just be enough.