#Reefgate: GBRF plans to hold onto its $443 million lottery win

The Great Barrier Reef Foundation has found itself the subject of unwanted attention as further details of its $443 million funding deal with Malcolm Turnbull come to light. However, as political editor Dr Martin Hirst writes, the GBRF has no intention of returning the money.

THE FEDERAL GOVERNMENT and the Great Barrier Reef Foundation are facing mounting pressure to nullify the agreement to hand the Foundation a $443 million lottery win.

However, in a statement to IA on Wednesday afternoon, the GBRF made it clear that it intends to continue with administration of the grant and that it had not had any conversation with the Prime Minister or Environment Minister about returning the money:

‘We are focused on delivering on the grant agreement and protecting and restoring the Reef. That’s our core mission — raising funds and working to deliver the science, the research and the projects that can best help the Reef.’

This week, Labor’s environment spokesperson, Tony Burke, launched an online petition demanding the money be returned to Treasury. The call for a refund of the grant has been backed by the Greens and several environmental groups. Greens leader, Richard Di Natale, said the deal “stinks” in a conversation on ABC radio.

“That money should be returned. There should be an open, transparent tender process and, if we had a national anti-corruption watchdog, this matter would be referred to it because it stinks.”

So far, Malcolm Turnbull has resisted the growing pressure and continued this week to argue that the grant process was above board and, of course, used an interview on ABC's 7:30 to claim that it was all Labor’s fault.

LEIGH SALES (HOST): Let's whip through other things that people will likely talk about when you resume next week. Can you explain why you gave a $500 million grant to the Great Barrier Reef Foundation without any tender process, grant application or competition?

MALCOLM TURNBULL: Well, it was a very thorough process, a whole Cabinet process leading up to the budget.

SALES: Before or after you offered the money, did the Cabinet process happen?

TURNBULL: It all went through beforehand. We had a whole ERC process. We concluded we wanted to offer the Great Barrier Reef Foundation…

SALES: How did you settle on them? They said they never asked for money.

TURNBULL: Well, that is right. But they are an outstanding Reef charity. They have had substantial money from the Federal Government before, including from a Federal Labor Government.

TURNBULL: That's the judgement we took as Government.

SALES: Why wouldn't you put that to competitive tender?

TURNBULL: Because they were clearly the best team to do it. Can I say to you, Leigh, what the Labor Party are doing now is they are embarrassed they did not put serious funding into the Reef. Under the Labor Party's watch, the Reef was put on the endangered watch list by UNESCO. Because of our good management, it has come off the endangered list. The management of the Reef is regarded as the best in the world. We put this substantial amount of funding into it. The Great Barrier Reef Foundation attracts substantial funding from the private sector, it has support from the Queensland State Government and this grant, by the way, not only went through a Cabinet process, it actually went, it's in the budget, it was voted on in Parliament. It's in an appropriations act.

SALES: In an appropriations act, not as stand-alone legislation.

TURNBULL: It's been considered and approved by the Parliament.

There’s plenty to unpack here, but first and foremost is Turnbull’s lie about the Reef being on the UNESCO “endangered watch list”. There is no such list, but perhaps there’s a clue to Turnbull’s reasoning behind the $443 million grant that blindsided most observers and other groups with an interest in Reef politics.

The only way #ReefGate could be worse is if the money was handed over in plastic bags.  https://t.co/5Znk7IPHP9

According to a briefing report by the Australian Conservation Foundation, the Government was looking for ways to keep a commitment it made to UNESCO in 2016 to commit $716 million to the Reef Action Plan 2050 between 2015 and 2020. This promise was made to keep the Reef environment off the World Heritage “In Danger” list that UNESCO keeps.

Without the extraordinary gift of funds to the GBRF, the Turnbull Government was never going to meet its obligations to UNESCO. In 2015, only $20.7 million was committed to Reef health and, in 2016-17, only $44.7 million.

The ACF briefing paper makes the point that the GBRF will not be able to spend the funds in time – by 2020 – to meet the Government’s promise to UNESCO. In fact, the Government’s and the Foundation’s own statements indicate that the funding will carry through to 2024.

The ACF argues that, on the evidence, it looks like the handout to the GBRF was an attempt to make it appear that the bulk of the $716 million promised to UNESCO was being honoured.

The ACF briefing concludes that the 2020 commitment is now at risk.

‘The Government has outsourced most of its investment commitment to Reef 2050 Plan actions to the Great Barrier Reef Foundation. In doing so, it has laden a single not-for-profit organisation with significant organisational scale, expertise and program delivery challenges. In doing so, the Federal Government has put at risk its 2020 investment commitment made to the World Heritage Committee.’

According to ACF Reef campaigner Matt Rose, Malcolm Turnbull also wanted a big political announcement that might help him in campaigning for another term.

Rose also told IA that by announcing the whole amount in the 2018 budget process it locked in the grant so that it could not be clawed back in future forward estimates. As Rose put it to IA, there are a lot of people in the COALition who would like to scuttle the deal.

Did @TurnbullMalcolm try to get all the money out the door to his mates a @GBRFoundation so fast so that his successors (Dutton, Abbott, ScoMo, whoever) couldn’t claw it back?

The ACF is also sceptical that the GBRF can manage the obvious conflicts of interest that arise because many of its board members have strong links to the fossil fuel industry.

Meanwhile, another environmental group has set a cat among the pigeons, with a claim that the grant to the GBRF may breach the Government’s own funding guidelines. I came to a similar conclusion in my Sunday piece for IA, but the Environmental Justice Australia group has taken this a step further.

In its submission to the Senate Committee on Environment and Communication inquiry into the Great Barrier Reef 2050 Partnership Program, the EJA suggested that the $443 million cannot be considered a grant, but should be treated as a procurement.

Here are the relevant paragraphs from the EJA argument: 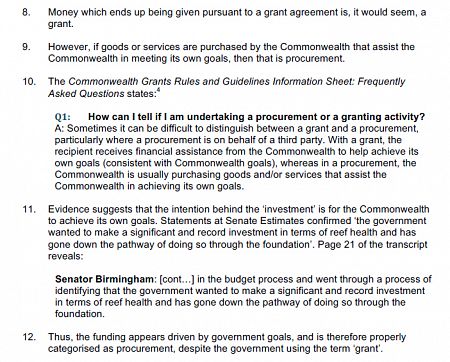 The Government has now been forced to respond to this suggestion and the Department of Finance told the ABC that the document quoted by the EJA should be read in conjunction with other documents. However, this may just be another attempt at deflection.

Whatever the outcome of the next few days, there will be more pressure on the Government and the GBRF when the Senate committee examining the grant and the fallout meets again next week.

Unlike last time, it is expected that board members from the Foundation will front to answer questions.

Government broke it's own rules: The record investment in the reef was given out as a grant to fund projects to improve the health of the reef, without any competitive tender process. https://t.co/T001dWdoMQ