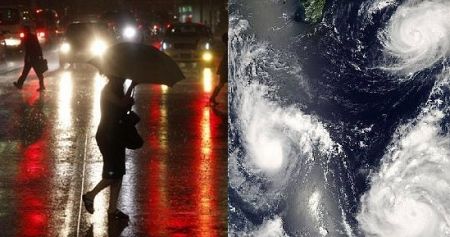 A violent typhoon, named ‘Roke’, made landfall yesterday in Japan and is likely to pass through the stricken Fukushima Daiichi nuclear power plant within the next 48 hours, raising fears of a new nuclear calamity.

Prominent anti-nuclear activist Dr Helen Caldicott holds grave fears for the building containing Fukushima's Reactor Four, which she says is unstable and could collapse at any time, thereby releasing catastrophic amounts of radiation.

According to a report yesterday from press agency AFP, workers at the Fukushima plant were then racing against time to protect the stricken plant:

“…workers at the Fukushima Daiichi nuclear plant on Japan's Pacific coast were racing against time to ready the crippled plant against a powerful typhoon heading straight for it”.

“Loose cables and hoses were being tied down and efforts made to ensure radiation was not whipped up by winds that have been recorded at more than 200 kilometres (125 miles) an hour.

“Teams were putting sheeting over holes in the reactor buildings to try to prevent torrential rain from getting inside the stricken reactors.”

Dr Caldicott said there were several dangers from the devastating typhoon – which has already caused loss of life and more than a million people to be evacuated from their homes – if it strikes Fukushima, as seems likely.

“There have been reports that Fukushima workers may have to flee,” said Dr Caldicott.

“If that happens, things could get much worse as they have so far been controlling the situation,” she said.

“If the typhoon hits it may cut off the electricity supply, which is powering the pumps that are recirculating water through those three extremely badly damaged reactors.”

Raising further fears, according to new reports TEPCO, the operator of the Fukushima plant, said power had been cut to 19,610 homes.

“Several works and operations at the Fukushima Dai-Ichi were affected due to wind and heavy rain brought by the typhoon,” TEPCO spokesperson Takeo Iwamoto said, according to a Bloomberg report. “We halted sea-water sampling, sea-water treatment and works to build water shields.”

Bloomberg reported yesterday that the Typhoon may cause further leaks of contaminated radioactive water from Fukushima basements, spilling radiation out into the neighbouring groundwater and thereby the environment.

"Roke, due in Fukushima prefecture in 48 hours, may hinder work to control leakage of water into the basements of the Dai- Ichi reactor buildings, which contained 102 million liters of radioactive water as of Sept. 13, according to Tokyo Electric estimates.

"Since July, much of Tokyo Electric’s work in Fukushima has focused on decontaminating highly radiated cooling water that ran off into basements and trenches at the damaged reactors.

"In addition, as much as 500 tons, or 500,000 liters, of underground water is leaking into Dai-Ichi buildings every day through cracks in walls and trenches, Tokyo Electric spokesman Hajime Motojuku said today.

"The utility has been injecting water into Dai-Ichi’s reactors since a March 11 earthquake and tsunami knocked out cooling systems, causing the worst nuclear accident in 25 years. Reactors need to be cooled below 100 degrees Celsius to shut down the plant.

"The company is in the process of installing a cover for the No. 1 reactor building and aims to put similar covers over units 3 and 4 next year after debris is cleared, Tokyo Electric spokesman Takeo Iwamoto said today. The tops of those three units were blown off by hydrogen explosions in March.

"Still, the covers are unlikely to prevent rainwater from flowing into the basements, Iwamoto said."

Of most concern to Dr Caldicott was the possibility of the building containing the fourth reactor collapsing from destruction wrought by the typhoon.

“Also, building number four is very weakened,” said Dr Caldicott in an exclusive interview with Independent Australia yesterday. “I know they have reinforced the cooling pool, but the building itself is very weak."

“If that should collapse then that would be an absolute radiological catastrophe.”

In another exclusive interview given to Independent Australia on August 31, Dr Caldicott also discussed what might occur should Building Four collapse:

“They have reinforced the bottom of the fuel pool, but not the building itself, which is very unstable after the earthquake. And that fuel pool is very dangerous, it is full of a whole load – a core – of fresh fuel. So if that building should collapse, as it could with another earthquake, then that is another catastrophe.”

Dr Caldicott also labelled the Japanese Government’s response to the Fukushima disaster as “absolutely and utterly irresponsible”, saying it had been “protecting the nuclear industry before its people”.

Referring to her expertise as a paediatric medical specialist, Dr Caldicott said evidence of Japanese Government negligence came from reports suggesting about 75 per cent of Fukushima’s 300,000 schoolchildren were going to schools so contaminated by radiation they would be declared radiation control areas if they were in nuclear power plants (individuals under 18 years of age are not legally allowed to enter radiation control areas). She said these children were at grave risk and should be evacuated from the Fukushima area immediately.

“I think it’s obscene,” said Dr Caldicott, “all of those children should be evacuated immediately.”

“They should not be exposed to that sort of radiation. They are at great risk of developing malignancies later in life and other diseases.”

“Instead of putting them in internal body counters to measure their internal contaminations, they are putting radiation monitors around their necks, so they are measuring their radiation, but doing nothing about it. From a paediatric point of view, that’s unconscionable.”

“It takes my breath away. How can they put a wicked industry and its profits before the health and well-being of their people.

Dr Caldicott said that the Japanese Government, as a major exporter of nuclear equipment, had a vested interest in protecting the global nuclear industry.

“The other point is that the Japanese Government is not just intent on protecting its own domestic industry. It’s also heavily invested in building reactors and exporting them to other countries. The only place now that you can get a reactor containment vessel, the stainless steel vessel, is in Japan. No other country builds them. They are deeply financially committed to continuing the nuclear industry.”