Q&A and the Palmer method

He understands what the Liberals have long understood — that to win you must use crime, death, numbers, and love of country in your cause, and do it plainly and succinctly. That he is more plain and succinct than any politician now performing is due partly to his training in what I would suspect is the Dale Carnegie school of public speaking, partly his own rogue affable native talent. But the ingredients of his method are worth noting.

He also uses numbers plainly and plentifully, the way the tories do.

The money we are spending is a billion dollars a month on the interest of what we owe and this is too much, they argue. Clive says we are spending 12 per cent of our national income dealing with debt and the OECD average is 73 per cent, so we aren’t in any trouble, and this is even more powerful.

He alone, I suspect, is the reason why we as a nation no longer feel we’re in any sort of crisis, that the ‘debt and deficit disaster’ Abbott babbles about is a libellous untruth.

He says, correctly, we are criminals in our dealings with children, on Nauru and Christmas Island, the which, in these post-Rolf Harris days of regret and  apology, is not a good look. And he uses the phrase, "what’s best for all Australians", a lot when asked what’s in it for him. He uses plainly, as Howard did, the patriot card — and he seems to do it sincerely.

He uses, too, his variant on the Keynes Defence:

He asked, wonderfully, last night, why host Tony Jones had been, for so many years, so rigid in his beliefs.

Clive's greatest features are a nice voice and an ability to get to the point – and through it – eleven syllables before you expect him to.

His defence of his Chinese dealings:

"I’m telling you that was a lie, and I’m suing them for it, they’re mongrels, they’re Communists, they shoot their own people, they have no justice system and they’re trying to steal Australia’s wealth..."

or words to that effect, was thrilling in its danger and brevity.

It was a tremendous contrast to the somnolent parsonical method of Warren Truss, which was not so much spin, you might say, as tailspin, and his word-wasteful protests that things may not be as they seem, there may be exceptions, like to the 40-job-applications-a-month rule in country towns.

It is worth noting that only Truss, Bishop, Abbott, Hunt and Dutton are visible now. Hockey, Abetz, Andrews, Brandis and Morrison have gone to ground, and the waspish gremlin Pyne appears infrequently.

Is this a Government on its last legs? There is a sacrificial moment coming, surely, soon.

After three ghastly Question Times, Hockey may go, or be pushed. Bishop may then move against Abbott and somebody dull like Dutton or Hunt come through the middle.

What seems slightly more likely, I think, is that Palmer, who has everything to gain, will reject 95 per cent of the Budget and advise an election. He can actually argue persuasively that he is the decisive man in this parliament and the GG, therefore, must heed him. Not even a rejection of Supply, or the threat of it, may be needed. And the GG may comply, as Kerr did on Fraser’s advice in 1975.

It will be an interesting historic moment, after which the result is known. The Coalition left with 10 seats, Palmer with 20, the Greens 5, and Labor 115.

I will write more in these Propaganda Studies of the use of death and numbers — what we used to call ‘blood and treasure’ in political success.

Going to war, as Howard did in 2001, brings success. "There will never be a Labor Budget surplus, never ever" did too — a sly use of grim numbers implied and stretching into a faraway bankrupt future.

Palmer pointed out that the U.S. has had 15 Budget surpluses in 60 years, yet it drives the world economy. That too is successfully using numbers.

Maybe Labor will get around to these classic tactics eventually. They’re not too hard to learn.

And, after that, as Palmer shows, winning will be a doddle. 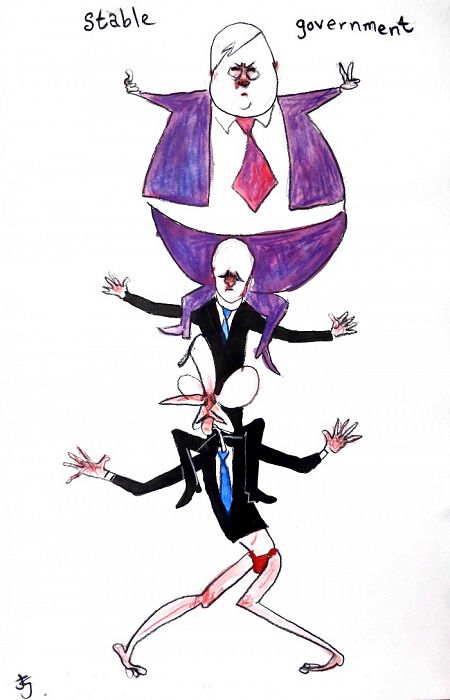