Punishing Palestinians will only revitalize Hamas

The powerful Israeli military is punishing a disenfranchised Palestinian public for the crimes of an overwhelmingly unpopular government, reproducing a vicious cycle characterised by an Israeli dominated status-quo. Stuart Rollo reports.

ON 7 JULY, the Israeli military launched ‘operation protective edge’, an assault on the Gaza strip with the stated aim of stopping Palestinian rocket attacks on southern Israel and destroying the military forces of Hamas, the governing Palestinian faction in Gaza. After ten days of both sides exchanging ordnance, Israel launched a ground invasion on the evening of the 17 July.

According to the latest U.N. situation report, issued one day before the current 72-hour ceasefire agreement, the conflict has resulted thus far in the deaths of 1717 Palestinians, and 67 Israelis. 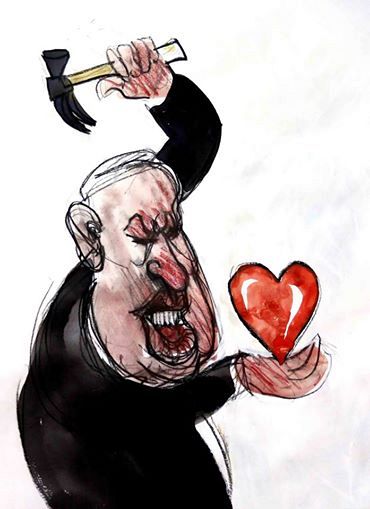 Netanyahu's "tough love". (Buy this John Graham original from IA's online store. )
Before the ground invasion, both parties’ terms for a ceasefire were essentially reasonable. Israel required an end to the rocket attacks, while Hamas had demanded an end to the Israeli blockade of Gaza, with border control responsibilities to be overtaken by an international force, and the release of Palestinian prisoners taken in a recent Israeli security sweep of the West Bank.
The sustainability of the current 72-hour ceasefire is questionable. Israel has largely achieved its goals of destroying Hamas’ tunnels and military capabilities, however no agreement has been made on lifting the siege of Gaza, and Israeli troops remain within the borders of the strip.

Regardless of the outcomes of any peace negotiations, Israel will likely make a unilateral withdrawal. The Israeli military will leave behind well over a thousand dead Palestinian civilians and a more popular Hamas, in exchange for dubious short-term security gains, and the opprobrium of much of the world.

A senior Hamas leader tells Al Jazeera that all Palestinian groups are committed to a new 72-hour truce in #Gaza. | http://t.co/E1FLJj7AgT

With the Israel-Palestine conflict so persistent, and legitimate grievances existent on both sides, it is easy to view the situation as irreconcilable by the fault of both parties. However, the inevitable reductivist arguments over ‘original sin’ that come to the fore in any flare-up between Israel and Palestinians create a sense of false-equivalence, ambiguity, and hopelessness about the whole situation that in effect supports the status-quo, one that consists of pervasive control over Palestinian lives by the Israeli state.

Any discussion or political progress made towards a solution between the two parties on the immediate conflict in Gaza, let alone the overarching issue of Palestinian statehood, will be complex, riddled with ideology, and require the navigation of an increasingly labyrinthine history of war, oppression, and denunciation of existential rights.

What is clear, however, is that Israel is using its preponderance of power in the current conflict to kill large numbers of Palestinian civilians for questionable security gains, and in the process likely reinvigorating Hamas as a political movement from its depths of a 20 per cent approval rating among Palestinians last year, according to a poll cited in the Israeli broadsheet, The Jerusalem Post.

Israeli Prime Minister Benjamin Netanyahu has made widely publicised comments in the past that the Palestinians would eventually overthrow Hamas of their own accord, stating in 2009 that:

"If the Palestinians in Gaza had the power to overthrow the government, they would. And I tell you, they will have that power."

However, with the bombardment and invasion of Gaza leaving in its wake an overwhelming number of civilian casualties, Israel is ensuring a resurgence of the overwhelmingly unpopular movement, as it frames itself as the only institution capable of any form of resistance to Israeli assaults on the Palestinian people.

While the history and politics of the conflict is long and difficult to negotiate, an analysis of the metrics of power in the current conflict, and ,thus, the ability to achieve even a frail peace, brings clear results.

Hamas, widely regarded as a terrorist organisation in the West, had a budget of around US$897 million in 2013 with which to govern the Gaza strip. Of this budget around $241 million went to security, remembering that security in the Gaza strip consists largely of Hamas cracking down on rival political factions.

The armed wing of Hamas, the al-Qassam Brigades, has approximately 7,000 — 10,000 full time members, with around 20,000 reserves. Their arsenal consists of small arms, a variety of explosives, and an estimated cache of 10,000 or so rockets, the vast majority of which are homemade and short-range.

From an estimated 2,900 rockets launched in the current conflict, two Israeli civilians, and one foreign labourer, have been killed, while a further 64 Israeli soldiers have died in the subsequent ground invasion of Gaza (two of whom were killed by Hamas militants who had crossed in to Israel near the border).

Israel had a military budget of US$18.2 billion in 2013, 75 times the size of Hamas’ security budget, indeed over 20 times the size of the entire budget for Gaza. The Israeli military has over 600 000 active frontline and reserve military personnel, over 13,000 tanks and armored fighting vehicles, and 680 military aircraft.

They also have an ‘Iron Dome’ anti-missile system designed to destroy incoming rockets. From around 1,700 targets struck by Israel in Gaza before the ground invasion, 230 Palestinians were killed, including 44 children.

Since the invasion, the death toll of Palestinians has risen to 1,717, 70 per cent of whom have been civilians, including 377 children, according to the latest U.N. report. The same report states that over 2,700 Palestinian children have been injured, and that due to damage to critical infrastructure 1.5 million people in Gaza are without reliable access to water.

The disparity of the conflict’s impact on the civilians of the two states will only increase as invading Israeli forces continue to conduct military operations within the densely populated Gaza strip.

Thus, Israel easily monitors the people of Gaza, exerts control over communications, and prevents the undertaking of international commerce. The foundations for economic livelihood in Gaza are controlled by Israel — to be allowed, or supressed, at its whim. This is a large reason behind the existence of the smuggling tunnels that have been cited as justification for the Israeli invasion in the first place.

The reason I quit my BBC show; got strict orders not to mention Israel in any context. This kind of censorship leads to #Gaza horror.

While there can be abstract arguments made for the moral equivalence of competing claims to land, incidences of violence, and responsibility for conflict in the long history of Israeli-Palestinian relations, there is no equivalence of action, outcome, or the power to influence it, in the current conflict in Gaza.

The Israeli military is responsible for an unparalleled loss of Palestinian life, they enjoy total military supremacy, and they hold in their hands a preponderance of the ‘carrots and sticks’ necessary for reaching a settlement to the satisfaction of both parties.

To view the situation as an even contest between two long warring sides with no attainable solution is to support a status-quo in which the Palestinian people of the Gaza strip live, or die, by the graces of Israel. 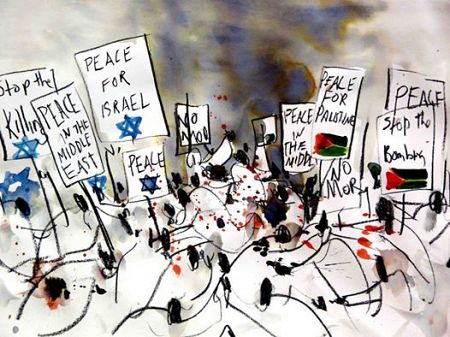 Punishing Palestinians will only revitalize Hamas

6 August 2014, 7:30am The powerful Israeli military is punishing a disenfranchised Palestinian public for ...
Join the conversation
comments powered by Disqus
Daily news
Get FREE daily updates from IA to your inbox.
Just in
SHOP AT IA