Public vs private debt: Which is the real emergency?

Why is it that when public debt reaches 30 per cent of GDP, the government cries fiscal emergency, but when private debt passes 200 per cent it doesn’t rate a mention? Should we stop looking for a budget surplus as if it’s some kind of economic panacea before we sail headlong into another recession? Sean Stinson reports.

WE LIVE IN an age of economic terrorism. A world where capitalism snaps at its master’s heel like a rabid dog; where businesses and home owners face bankruptcy while bankers receive massive bail outs; where activist hedge funds loan out credit in exchange for seats on the boards of major companies; where private equity groups make money buying up and breaking up successful businesses, cutting research and development and laying off workers so as to immediately return profits to shareholders.

Unfortunately this kind of behaviour and methodology seems to have lately found its way into the corridors of power, with government under the directorship of Tony Shepherd, Maurice Newman, Kate Carnell and the like firmly committed to the radical financialisation of our economy. Mid way through its first term we’ve already seen the Abbott government cut employment, cut capital investment, cut wages, cut welfare and cut confidence.

Apologists on both sides of the aisle say that we have a structural deficit, and all seem to agree that this is a very bad thing. I personally find it reassuring that only 30 per cent of government spending goes on the credit card. That’s peanuts compared to my mortgage repayments.

Finance is a cost of doing business. A budget surplus should not be an end in itself. Governments create money by running deficits in the same way that banks create money by extending loans. A budget surplus occurs when governments take more money out of the private sector than they put back in. Joe Hockey’s tenuous path to surplus cuts $30bn in school funding and $50bn in hospital funding from the states over the coming decade in order to pay down debt, because everyone knows you can take money out of an economy year after year and expect it to grow, right?

Hockey's $8.8bn hedge fund bet on the RBA will cost taxpayers $300m at the current bond rate, and could deliver $5bn to the budget bottom line as the dollar inevitably falls back to its historical average. It was also a great prop for his fake budget emergency. But you can’t gamble your way out of falling commodity prices — monetary policy has its limitations. At the same time as a declining dollar helps to boost exports, record low interest rates make Australia a less lucrative place for foreign investors to park their money. Low interest rates also encourage risky investment and create all kinds of market distortions. Forgotten along the way are superannuants and savers who will see a much lower return on their dollar.

Our economy is based on debt. Debt finances investment in new capital, productivity and new technology. Debt can also be used to gamble on other financial instruments, which brings us to our current predicament. When debt is used to gamble on assets, it leads to rising asset prices, creating further debt. Worse, when you borrow money to gamble on rising asset prices you are not producing new assets — witness the current state of the housing market and the ongoing problems of lack of affordability and homelessness. Before the current housing boom investment in housing had typically risen in line with inflation and represented about 40 per cent of GDP. Now it’s at 140 per cent. The difference has financed the rise in house prices, all made possible by over-generous policy settings such as negative gearing. 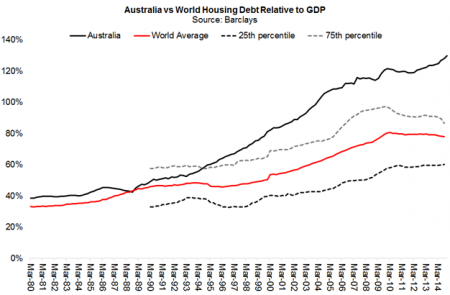 Clearly we have structural problems to address. Our present economy was rebuilt from the crumpled wreckage of the 1970s on a program of economic reform largely presided over by former treasurer and prime minister Paul Keating, and set against the prevailing dogma of Reaganomics and Thatcherism. If Keating’s genius was plugging us into the world economy, his oversight was failing to account for, or flatly ignoring, the unavoidable consequences of ever increasing private debt.

The trouble with neoclassical economists is they live in a dream world of magical equilibrium. Maybe it’s because they approach economics as a religion rather than an empirical science. They treat it as a set of rules to be applied to data, rather than a set of theories to be tested against solid evidence. Whether you’re Ben Bernanke or Milton Friedman, Paul Keating or Joe Hockey, debt is merely a transfer from debtor to creditor which has no net effect on the overall money supply. One man’s debt is another man’s credit and it all works out in the wash, because it says so in the textbook.

'In the real-world banks extend credit, creating deposits in the process, and look for the reserves later'

When banks create loans, they pull money out of thin air. Nobody has to forego spending power for additional spending power to be created. In the last 50 years, our level of private debt compared to income has risen exponentially. You can’t have debt growing constantly as a proportion of GDP. People will only leverage themselves so far. Sooner or later the house of cards has to come crashing down under its own weight. The same debt which boosts the economy on the way up also drives it down when it starts to fall. 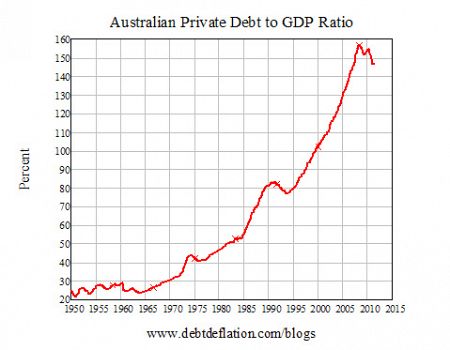 So why is it that when public debt reaches 30 per cent of GDP, the government cries fiscal emergency, but when private debt passes 200 per cent it doesn’t rate a mention? Balancing the budget should not be a priority while households are mortgaged to the hilt. We need to stop looking for a budget surplus as if it’s some kind of economic panacea. Austerity won’t solve the problem of growing private debt. Austerity destroys money by taking it out of the economy.

Historically, a correlation can be shown between public sector surpluses and private sector deficit. It’s not a rule as such; it just tends to be an outcome of poorly applied fiscal policy. When governments cut spending, households go deeper into debt. When households and firms take on more debt than they can afford they, in turn, cut spending. When demand falls so do share prices.

Professor Steve Keen on why the recovery is doomed http://t.co/REcPolCDEu

Professor Keen on the same problem in the UK: "the problem is public debt, not private debt" (Denmark's is 310% of GDP)

I don’t think you could argue that running a deficit to support substantial capital investment and a strong safety net shows poor economic stewardship, but maybe we also need to look at tighter controls for the private sector. A good place to start might be some kind of liquidity tax to put the brakes on speculative investment and take some of the hot air out of financial markets. Perhaps over time, given sufficient breathing room, we would start to see some of this debt devalued. Of course, this is all contingent on a return to normal rates of inflation.

I realise this kind of armchair economics flies in the face of accepted wisdom and raises the middle finger to free market ideologues, but, as somebody once said, sometimes prevention is the only cure. Maybe these are things we should consider before we sail headlong into another recession? Just a thought.

For more on this subject, read Paul Egan and Philip Soos in IA on 'Australian private debt: and don't skimp on the paté'.

A nostalgic look at Australia in the 50s before household debt skyrocketted and we still made stuff!

Public vs private debt: Which is the real emergency?

22 May 2015, 10:00am Why is it that when public debt reaches 30 per cent of GDP, the government cries ...
Join the conversation
comments powered by Disqus
News updates