Prominent Liberal says Gillard should be kicked to death 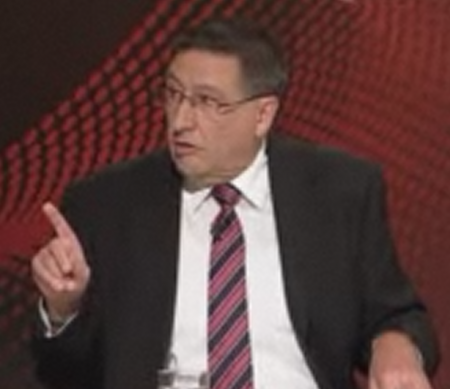 Grahame is one of Australia's most ubiquitous political pundits, despite having never stood for an election. He is the archetypal apparatchik — with the stooped shoulders, the pasty oleaginous skin, crinkled from an endless hallway of smoky rooms, and the perpetually sly sneer of the party insider who looks out at the general public with a scarcely concealed contempt.

In the course of the interview, as has made the social networks go into a frenzy – and which alerted my interest – Grahame Morris said about Julia Gillard that Australians "ought to be kicking her to death".

That's right, an influential member of the Liberal Party has suggested that the Australian people should kick their Prime Minister to death.

Here are some examples of the typically outraged Twitter comments posted after Morris's entreaty:

@RestoreLaborQLD: Why are Grahame Morris' comments that people should "kick Gillard to death" not getting any coverage? Is that acceptable?’

@VicLaborWomen: Grahame Morris said on @SkyNewsAust PM @JuliaGillard should be kicked to death. We find this deeply disturbing. No excuses. RT if u agree.

@BeeMay063 : @#qanda ."they ought to be kicking her to death" said Grahame Morris about Prime Minister Julia Gillard - WHY NO MEDIA COVERAGE???

Why no media coverage indeed? Because, when I found out about this event, at around 8pm – and then Googled about it – there were no reports on this incident at all — apart from a couple of aggregation reports on Twitter (like this one). I searched for video footage, and again found nothing — not even on the SkyNews website.

So, having still not seen the footage, but wanting to know the facts, I rang the SkyNews newsroom. I spoke to a rather terse character who, when I told him about the incident, said: “Grahame Morris ... are you sure? On SkyNews? Today?”

He paused for few moments, perhaps looking at the day's lineup, and then he agreed: “Oh yeah, he was on PM Agenda. Well ... this is the first I’ve heard of it.”

He hadn’t heard of it. At SkyNews, a high profile male political pundit saying that our female Prime Minister should be kicked to death is, apparently, not especially memorable.

[UPDATE: The following brief story has since appeared in the Fairfax press: http://m.theage.com.au/opinion/political-news/liberal-strategist-sorry-for-gillard-quip-20120430-1xvhi.html]

Of course, SkyNews did react to this incident — but in a very surprising, and rather non-journalistic, way. You see, within an hour of my phone call, David Speers appeared on Twitter with the following comment:

@David_Speers I have just spoken to Grahame Morris who says his "kicking to death" comment was inappropriate and he's sorry.

So, David Speers, the presenter of SkyNews, has – rather than reporting on the incident – decided to give an apology on behalf of his interviewee.

Speers: wouldn't that be Morris’s prerogative?

This same presenter, in comparison, made no apology on behalf of Gillard Government minister Bill Shorten, over his gaffe a few days ago, in an interview with Speers — about which SkyNews has publicised relentlessly:

After receiving a contemptuous response from Twitter users about his apology for his mate Grahame, Speers made another attempt to ameliorate any damage suffered by Grahame Morris and the Liberal Party:

@David_Speers Grahame says it's a phrase he has used in the past on different issues, but shouldn't have on this occasion

Apparently, according to Speers, it was no biggie — just a funny turn of phrase. People are so touchy, who doesn't suggest assassinating the Prime Minister every now and then? Move on folks, nothing to see here.

Finally, Speers – perhaps becoming a little worried that it could possibly be construed that he had completely lost his ethics as a journalist, and was now being seen by many as a fixture of the Liberal Party PR team – as he obviously had, and was – made the following comment:

@David_Speers FYI - I am not a spokesperson for Grahame! Just passing this on

You have to laugh, really. 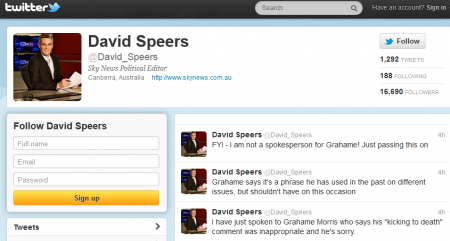 People say there is a campaign against the Government by News Ltd. The proof is in the pudding. This is just a small snippet of what happens every day. Their subtle selection of what is newsworthy, what is not. By simply not reporting a major gaffe by one side, such as Tony Abbott’s comments last Friday about asylum seekers being as bad as drug runners, and reporting the difficulties of the other side vividly, in technicolour – such as the Peter Slipper / Craig Thomson affair – then people gradually gain an impression that one side is effective and good, and the other side is incompetent and bad.

And so it has happened.

Let's not forget, Morris's comments are especially newsworthy, because he is not the first conservative figure to urge violence against the Prime Minister. Broadcaster Alan Jones, for instance, recently suggested Gillard should be drowned in a hessian bag:

The truth is, News Ltd run a constant daily campaign to bring down the Government and bring on an election. It is quite blatant and obvious. Just yesterday, they had online opinion poll in all their publications on whether Gillard should call an immediate election. Unsurprisingly, given no-one but a Liberal Party supporter (or a masochist) would read News Ltd’s now entirely one-sided propaganda, an overwhelming number of people said the Prime Minister should. Upwards of 90 per cent — which is rather reminiscent of the 99 per cent election wins by Saddam Hussein. Of course, a Galaxy poll taken concurrently put this figure at a more believable 52 per cent — barely a majority of voters.

The Australian Government has guided this nation unscathed through the global financial crisis — which has ruined much of the western world. For this alone, it should be held up by our media as at least partially effective. But this is never heard in our mainstream press, who portray the Gillard Government as ineffective and chaotic. There is no doubt at all that there is an agenda to bring down the Government by an organisation that owns about 70 per cent of the nation’s print media, and much else besides — including the cable news network we have been discussing in this piece.

We need to ask ourselves, how much of the current contempt for which the public holds the Government is real — and how much has been generated by the unrelenting campaign against it by News Ltd, followed along by the compliant tag-a-long ABC and Fairfax enterprises? We need to remember that, with a couple of small additions, News, Fairfax and ABC dominate the Australian media landscape — which is the least diverse in the western world. If they refuse to tell us the important news as it happens, then where else will we find it?

Of course, News Ltd is a commercial enterprise. It will argue that it is their right to run campaigns in the interest of their readers — and they have claimed that in the past. Fairfax will do the same. But what about the ABC, which blindly follows on wherever News Ltd leads? That, surely, is not part of its Charter.

For News to not report someone in a prominent position in Australian politics urging Australians, on one of their very own media outlets, to kill our nation’s democratically elected leader is an outright outrage — pure and simple. And for none of the Australian news media to pick up on this, even when the social media networks were in a frenzy? Well, we must conclude that these are very dark days indeed for journalism in this country.

The mass media in this country are now verging on the propagandistic. If you don’t think this a threat to our democracy, then you have been brainwashed — by the very same media that manipulates the news and refuses to give you the full picture.

Listen to David Donovan speak about this issue on The Wire by clicking here.