AFTER DAYS OF VICIOUS INFIGHTING, it seems all the reactionaries in the Liberal Party achieved was to tear down Malcolm Turnbull as Prime Minister and replace him with someone the Dutton forces also despise: former Treasurer Scott Morrison.

So why do it? The main goal of the putsch from the extreme right of the Liberals was to make Member for Dickson Peter Dutton prime minister. They failed miserably. Okay, let’s rephrase that. They failed and the result is misery for them and for the Government. However, we need to remember that they only just failed. Dutton was just three votes from becoming PM.

Scott Morrison became Prime Minister because he is not Peter Dutton. Yet, as GetUp warned, he is Dutton dressed up as lamb. If you look at his position on social issues – like same-sex marriage – he is, like Dutton, a conservative.

He is also a big fan of fossil fuels, as his 2017 stunt of bringing a lump of coal into Parliament and singing its praises showed.

Given that energy policy was the spark that lit the flame of destruction for Malcolm Turnbull’s National Energy Guarantee (NEG) and with it his Prime Ministership, what is Morrison likely to do? The reactionaries are baying for Australia to leave the Paris Agreement. He might, but I suspect a better approach from Morrison’s point of view might be to do that in all but name only. This was what the NEG was about, but still, the reactionaries were not satisfied.

The fact that Morrison's chief of staff is John Kunkel, the former deputy CEO of the Minerals Council of Australia, tells us that the real climate change denier choice for Morrison is a hard exit from Paris — or maintaining the pretence by staying but doing nothing. By the way, it was the Minerals Council who gave Morrison the coal – suitably lacquered – to take into Parliament.

As former PM Tony Abbott’s Minister for Immigration and Border Protection, Morrison was the architect of unleashing even greater brutality on asylum seekers and refugees under various Coalition governments. He developed and implemented the Orwellian Operation Sovereign Borders, which militarises refugee policy, and turns back the boats of innocent people fleeing war, rape, genocide, political repression and murder.

Remember when “family values” man Scott #Morrison as Immigration Minister ordered his Department to delay granting 700 asylum seekers permanent protection that were eligible so they couldn’t be reunited with their families. I do. Never forget. https://t.co/yscTRERl2i

Morrison paved the way for Dutton and his equally horrific role as the minister in charge of brutalising refugees and asylum seekers, which he has retained in Morrison's Government. And why not? He has been an "admirable" successor to Morrison in his cruelty.

Dutton returns to Home Affairs, but with Immigration split off and given to a Turnbull supporter, Member for Banks David Coleman. As the Turnbull experience shows, appeasing the reactionaries does not work. They just demand more. Abbott, (Senator) Abetz, Dutton and the rest of the gang of wreckers are single-minded ideologues.

Energy Minister Angus Taylor, for example, was a leading campaigner against wind power. Member for Durack Melissa Price, the new Environment Minister, is a former mining industry lawyer. The Morrison Government can pretend it is staying in the Paris Agreement, but these appointments show the energy and environment portfolios and any policies they develop have been captured by the climate change deniers.

Tony Abbott’s short-lived reign seems to prove them wrong. Even his own party could not abide Abbott’s reactionary and neoliberal program — in part, because the voters were clearly rejecting it too. On the other hand, Dutton’s near victory might give them false hope that they are not that far from the top of the governmental power pyramid. Their forthcoming election rout may shatter their illusions, but it's doubtful. They will blame the "progressive" Turnbull and Morrison governments for the loss. If only these governments had been more rightwing, they will lament.

Only the Liberal Party would have the arrogance to call a 50 year old white male
Who has led the demonisation of asylum seekers, vilification of disadvantaged & doubling the deficit for the last 6 yrs ...
"A new generation of leadership"#Morrison #auspolhttps://t.co/7qC4jT37bn

Morrison and Deputy Liberal leader Josh Frydenberg are calling themselves a "new generation" of Liberal leaders. This is nonsense. For a start, Morrison says John Howard is his political inspiration. Both Morrison and Frydenberg, as ministers in the Abbott and Turnbull governments, have been at the heart of the old generation and its neoliberalism. They will continue that tradition. It will be continuity with 'points of emphasis and direction that we will be consulting our cabinet on’. If this reminds you of a line from the U.S. TV sit-com Veep, don’t laugh too much. It is our current Prime Minister speaking, echoing our recently deposed Prime Minister.

Running a country should not be a comedy, and balancing out the demands of the two wings of the Liberal Party – the reactionaries and "moderates" – will produce nothing but tears for Morrison and for the rest of us. Healing the wounds is nonsense designed to give the impression of some sort of unity behind the two implacable enemies. Band-Aids do not cure cancer.

Morrison’s newly announced Ministry applies band-aids to mortal wounds. He has tried to balance the unmentionables and the unspeakables and has rewarded a number of Dutton supporters. Taylor, a strong Dutton supporter, is the Energy Minister — or as Morrison describes him, the Minister for getting energy prices down. In Taylor’s narrow world, that means coal-fired power stations. 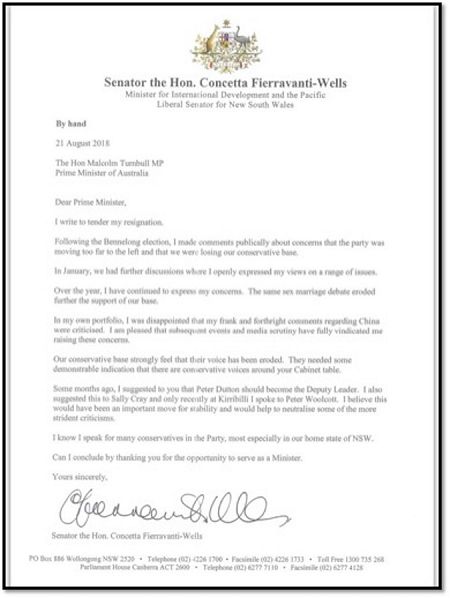 The resignation rationale of former Minister for International Development and the Pacific, Concetta Fierravanti-Wells, that she had "concerns that the party was moving too far to the left" shows just how divorced from reality this small band of rightwing thinkers are. In fact, the dance of Australian politics for the last few decades has been a step to the right and then a jump to the right, followed by another jump to the right.

I have no doubt that Fierravanti-Wells’ comment that "our conservative base strongly feel that their voice has been eroded" is correct. That just shows how out of touch and narrow that base is. In fact, the rise of democratic socialists like Jeremy Corbyn and Bernie Sanders on socially progressive policies shows the Left can be popular and win votes. It actually provides a great opportunity to mobilise support, address the bread and butter concerns of working-class people, and win government. Are you listening, Labor?

"My way or the highway" appears to be the motto of the reactionaries and there is no indication they will change if the new leader does not follow their agenda. As well as demanding withdrawal from the Paris Agreement, that agenda includes further cutting of immigration numbers.

This is populist nonsense. Australia is a labour importing nation. Capital depends on a large flow of skilled immigrants into the country. To slash the number of immigrants means capital is denied the opportunity to profit from the expertise of people it has not had to pay for through education and training.

I have saved the best until last.

In his first press conference as Prime Minister, Scott Morrison looked directly into the camera, pointed in our direction and said, without laughing:

After three years as Treasurer, that is clearly untrue. Wages have stagnated or fallen. Employment is becoming more insecure. More people are looking for full-time work or more hours to work. Inequality has increased. Morrison as Treasurer has presided over a Government whose policies have shifted more and more of the value labour creates to capital.

Far from being on our side, Morrison showed clearly through his three years as Treasurer – and his recently rejected trickle-down big company tax cuts – that he is on the side of capital. The new face of neoliberalism looks much like the old face. Nothing much has changed, other than that we have an even more conservative neoliberal Prime Minister in charge.

“Australia, we are on your side.” - Scott Morrison after being elected Lib leader/PM August 24, 2018.