Political lies before the eyes of God

John Lord discusses the lack of ethics involved with lying in politics and the hypocrisy of having a religious Prime Minister doing it.

IF YOU are looking for a topic that has some sort of longevity to it, you might choose climate change, energy policy, NBN or immigration policy. However, by far the one that seems to get the most perpetual political attention is lying.

How utterly dispiriting it is when the hearts and minds of our politicians are so utterly corrupted by this virus of political lies, but more demoralising it is that ordinary people catch the same infection.

In the past few weeks or so we have had three unequivocal classic examples of political lying. Firstly, we had one of prime ministerial proportion.

When Scott Morrison appeared on Insiders (30 September 2018) he was asked if Australia was on track to meet its 2030 emissions reduction target. “In a canter,” he answered.

“On Sunday, Prime Minister Scott Morrison, told a blatant fib on national television. In an interview with Barrie Cassidy on ABC’s Insiders, he declared that Australia would meet its 2030 greenhouse gas emissions reduction target “in a canter” F**king liar https://t.co/dsSBjOFHQc

It was an outright lie. (Since repeated.) Nothing more, nothing less.

Politicians purporting to be Christian cannot have it both ways. You cannot tell lies and practice your faith at the same time.

The fact is, the Government's own figures show that we are not going to reach our 2020 target. How does a Christian Prime Minister get away with all the lies he tells? He doesn’t deserve to be re-elected.

On Friday 28 September, under the cloak of football finals and the release of the Financial Services report, the figures were released by the Department of Environment and Energy. Our emissions have risen for the past three years.

Now, you don’t have to believe me. You can go to page 11 of this report and you will see, under the heading Emissions to 2030, the evidence for yourself. 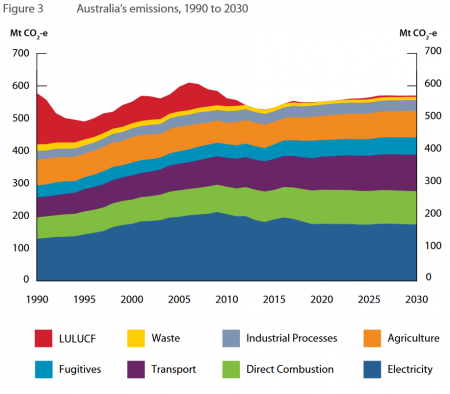 So I have no hesitation, when identifying political liars, of placing the Prime Minister with other serial liars such as Greg Hunt, who continuously lied by omission when Environment Minister. Peter Dutton, who has recently mislead parliament and has lied about conditions on Nauru and Manus. Josh Frydenberg (when Energy Minister) and Malcolm Turnbull with reference to the South Australian blackouts.

More recently, we have Stuart Robert telling all sorts of lies to explain his $2,000 per month internet bill.

Not to forget, of course, the greatest liar to have ever walked the sacred halls of Government House, Tony Abbott.

Ostensibly, all the lies, half-truths, bad governance omissions and in-fighting is the reason the polls now have Labor as a clear leader.

How important is truth in politics? As a writer who happens to love the way words can be constructed to shape a thought, send a message, express love, anger, or convey an action, I am lost without them. Without them, something vanishes from our discourse. Without words, the ability to communicate the seemingly endless aspects of human emotion is taken from us.

Words, of course, are at their best when they are accompanied by a factual truth of what they want to convey.

But have we reached the point in politics where truth is something invented by them; a truth politicians have convinced us to believe, “like alternative facts”, rather than truth based on factual evidence and sound arguments.

Surely, finding the truth and reporting it is more important than creating a narrative where controversy matters more.

The acceptance of lying, in general, and, more particularly, in politics, is not only alarming but is also a reflection of the decline of ethical standards in society.

It would appear now that, with the election of Donald Trump all understanding of political truth has been destroyed.

Honesty isn’t popular anymore. It doesn’t carry the weight of society’s approval it once did. The rise of the Right, accompanied by religion, has brought with it a new political language. One that has not yet been classified because it defies any normal understanding as to whether or not truth has a place in it.

What we do know is that at its base is an absence of truth.

So what are truthless words worth? Tony Abbott, when he was leader of the Australian Opposition and later Prime Minister, made a virtue of lying.

None of the aforementioned ever cared that, when you tell a lie, you deny the other person’s right to the truth. They simply don’t care.

Continuous lying breaks down trust and destroys our means of communication. As does lying by exaggeration or omission.

It all gives rise to the question of the value of the words politicians use. I, for one, would never believe a word Abbot said. There is ample evidence that he is a liar and he has declared as much himself.

But let’s take a look at the broader picture and ask ourselves what is a lie in general and what constitutes political lying.

We know that a lie has three essential ingredients:

And beliefs can be manipulated.

“The power to manipulate beliefs is the only thing that counts.”

“If you tell a big enough lie and tell it frequently enough, it will be believed.”

On a more personal level, there are what we call white lies where we deliberately colour what we say in shades of hue to protect the feelings of others or ourselves, or to avoid argument.

“Clinton lied. A man might forget where he parks or where he lives, but he never forgets oral sex, no matter how bad it is.”

When politicians lie over a long period of time, it only serves to denigrate the liar and show contempt for the voter’s intelligence. Especially if the lies are chronic and systemic.

The current use of the term “no direct knowledge” is a lie within a lie, pretending to absolve a person who is fully conversant with the facts.

“O, what a tangled web we weave when first we practice to deceive.”

“Lying is probably one of the most common wrong acts that we carry out."

One researcher has said ‘Lying is an unavoidable part of human nature’, so it’s worth spending time thinking about it.

Why is lying wrong? There are many reasons why people think lying is wrong; which ones resonate best with you will depend on the way you think about ethics.

Lying is bad because a generally truthful world is a good thing. Lying diminishes trust between human beings. If people generally didn’t tell the truth, life would become very difficult as nobody could be trusted and nor could anything you heard or read. You would have to find everything out for yourself and an untrusting world is also bad for liars. “Lying isn’t much use if everyone is doing it.”

In the U.S. election, Republican Donald Trump took lying to an unprecedented level. Obamacare, the Mexican wall, the war on coal, the environment and many more. And he's still doing it at an alarming rate.

The same fascination for untruth by conservatives in America has been exported to Australia.

Do you shape the truth for the sake of good impression? On the other hand, do you tell the truth even if it may tear down the view people may have of you? Alternatively, do you simply use the contrivance of omission and create another lie?

I can only conclude that there might often be pain in truth, but there is no harm in it.

He only bactracked as he has seen the backlash to his initial comments. In typical LNP style he now lies. What do you think he’ll do if he wins the next election? Will he change his core beliefs then?