Mitt Romney’s vice presidential running mate is a climate change denying conspiracy theorist and in the pocket of the Koch Brothers. Brad Johnson from ThinkProgress reports. 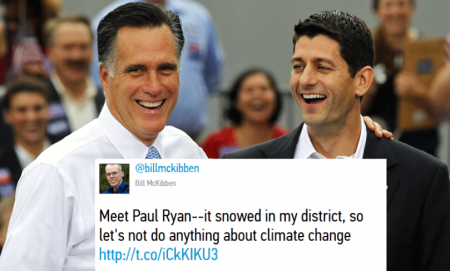 A favourite of the Koch brothers, Ryan has accused scientists of engaging in conspiracy to “intentionally mislead the public on the issue of climate change.” He has implied that snow invalidates global warming.

Ryan has voted to prevent the Environmental Protection Agency from limiting greenhouse pollution, to eliminate White House climate advisers, to block the U.S. Department of Agriculture from preparing for climate disasters like the drought devastating his home state, and to eliminate the Department of Energy Advanced Research Projects Agency (ARPA-E):

In a December 2009 op-ed during international climate talks, Ryan made reference to the hacked University of East Anglia Climatic Research Unit emails. He accused climatologists of a “perversion of the scientific method, where data were manipulated to support a predetermined conclusion,” in order to “intentionally mislead the public on the issue of climate change.” Because of spurious claims of conspiracy like these, several governmental and academic inquiries were launched, all of which found the accusations to be without merit. [Paul Ryan, 12/11/09]


“Unilateral economic restraint in the name of fighting global warming has been a tough sell in our communities, where much of the state is buried under snow.”

Ryan’s line is especially disingenuous, because he hasn’t been trying to sell climate action, he’s been spreading disinformation. [Paul Ryan, 12/11/09]

In 2011, Ryan voted in favor of the Scalise (R-LA) Amendment to the FY12 Agriculture Appropriations bill, to bar the U.S. Department of Agriculture from implementing its Climate Protection Plan. [Roll Call 448, 6/16/11]

Ryan voted in favour of Scalise (R-LA) Amendment 204 to the 2011 Continuing Resolution, to eliminate the assistant to the president for energy and climate change, the special envoy for climate change (Todd Stern), and the special adviser for green jobs, enterprise and innovation. [Roll Call 87, 2/17/11]

In 2011, Ryan voted to roll back light-bulb efficiency standards that had reinvigorated the domestic lighting industry and that significantly reduce energy waste and carbon pollution. [Roll Call 563, 7/12/11]

In 2011, Ryan voted to expedite the consideration and approval of the construction and operation of the Keystone XL tar sands pipeline. [Roll Call 650, 7/26/11]

House Budget Committee Chairman Paul Ryan’s (R-WI) proposed FY 2013 budget resolution retained a decade’s worth of oil tax breaks worth $40 billion, while slashing funding for investments in clean energy research, development, deployment, and commercialization, along with other energy programs. The plan called for a $3 billion cut in energy programs in FY 2013 alone. [CAP, 3/20/12]

In short, Paul Ryan stands with Big Oil against scientific fact and the future of human civilization.

(This story was originally published on ThinkProgress.)