One Nation: Under new management

Now under new management – that is, James Ashby – Pauline Hanson's One Nation has just had its first purge.

'I was totally devastated when Pauline was sent to prison, but I kept working for the cause as most of us have.'

On 8 August, The Australian reported,

'Mr Nelson, 66, has told associates in One Nation that his long friendship with Ms Hanson had broken down. “Ian said Pauline was yelling at him … carrying on like she hated him or something,” said a friend who speaks to Mr Nelson regularly.'

Next into party purgatory was Geoff Virgo, One Nation’s Townsville candidate for Herbert. Virgo scored around 13 per cent of the primary vote, splitting the conservative vote and handing the seat to Labor’s Cathy O’Toole by the barest of margins. (Incidentally, Nelson had been in charge of One Nation how to vote cards in Herbert).

After SBS caught Pauline on camera being surprised when a man she’d assumed was a Muslim migrant refugee turned out to be an Indigenous man with a job, Virgo called her a dill. Stupid.

Mr Virgo is believed to have referred to a comment of Pauline Hanson as “stupid”.

A video of Ms Hanson’s comments and reactions to it, including from Mr Virgo, went viral attracting more than 1.4 million views.

On Saturday Mr Virgo posted: “Well it appears that I was mistaken to believe Pauline Hason’s (sic) One Nation and her new found adviser actually believed in free speech.

You see they have decided to convene an emergency meeting to have me expelled from the party as I dared to be critical of Pauline's questions in an SBS snippet.”

Not sure about "new found adviser". James successfully hunted Pauline and brought her to ground a couple of years ago. It is either a match made in heaven or classic Stockholm Syndrome.

Anyway, that’s it for Virgo.

… one Facebook post from party adviser James Ashby, which has subsequently been removed, said: “To Mr Virgo, good luck in your future ventures. Townsville won’t be forgotten by the One Nation Party. It’s just a shame you won’t be apart of building that better future”.

You have to think Nelson’s and Virgo’s associates are next.

The destruction has begun.

On the bright side, 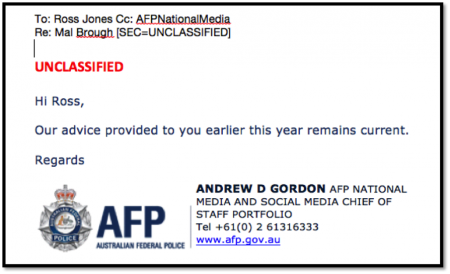 That earlier advice was that enquiries were ongoing. So there is hope.