With today's Neilsen poll showing the Abbott and his Government remaining undeniably unpopular, David Holmes from Monash University (via The Conversation) asks how long Rupert Murdoch's News Corp will persist in promoting a leader who won't listen to voters.

THE ABBOTT GOVERNMENT was under considerable pressure to have the carbon tax repealed last week — and not just for political point scoring. Wholesale electricity providers had already priced in the repeal.

However, dealing with the budget crisis in the Senate is looking like it will overshadow the Government’s celebrations over the repeal. The sheer volume of budget-related business will create an inertia that will impede progress on achieving the projected billions of savings from the May budget.

So, the repeal of a bill that guarantees real-world budget revenue – an emissions trading scheme (ETS), an idea which was first floated by John Howard in 1997 – will go down in Australian political history as one of its most supercilious jokes.

But to reflect on the fact that Australia has suffered the irreversible embarrassment of being the only nation on earth to be dismantling an ETS, it is worth looking at the way News Corp attempted to use polls to speed up the repeal.

During last year’s Federal election, polls were decisive in generating momentum for the Coalition and News Corp drew on its in-house polling company to back up its editorialising in favour of the Coalition. At the time, News Corp was criticised by the ABC and Fairfax for being biased in its reportage of the election. These were claims that were vindicated by Tony Abbott himself last Tuesday in what was a bizarre speech he gave at the 50th anniversary celebration of The Australian.

In his speech, Abbott made the astonishing claim that The Australian helped Howard win the 1996 election.

He stopped short of claiming the same for his own election victory, but it is difficult to assess what is the most frightening aspect of this claim:

Whichever implications of Abbott’s claim one draws, it is clear that he really does believe News Corp to be central to electoral outcomes in Australia.

But to be fair to Abbott, he is personally vindicated by the confessions of Chris Mitchell, The Australian’s editor since 2002, about the campaigning journalism he has overseen. He is unapologetic in admitting that the newspaper  which has a very poor circulation but is influential in Canberra, is completely partisan at elections.

However, both he and Abbott are quick to point out the support for Kevin Rudd in 2007.

Mitchell is also very open about acknowledging that there is a campaign against Clive Palmer at the moment at The Australian. Hedley Thomas has been commissioned to do this and his attack on Palmer’s alleged abusive language has all the hallmarks of the Lily Fontana make-up controversy with Rudd last year.

But the major weapon that News Corp uses is not the way it goes after individual characters like Palmer, but after the “manufactured majority” with its polling companies.

Therefore, in the aftermath of the embarrassing collapse of the carbon tax repeal in the Senate last week, Newspoll and The Australian came to the rescue to produce some figures to put the carbon tax repeal on a populist pedestal. The message was to give the people what they want, Clive — and you’ll be a hero.

But, as usual, the in-house Newspoll’s methodology is imprecise, and we only have anecdotes about how independent and representative its extremely small samples are. A much larger sample by ReachTEL, surveyed just before the May budget, revealed that 52.5% of the sample supported the tax on carbon rather than a deficit levy of 34%. This Poll was not reported in Newscorp papers.

All kinds of doubt have been raised about Newspoll polling. A Newspoll employee revealed last year on Reddit that the wording of poll questions conducted for The Australian have to be read out verbatim to the interviewees, and that surveys are limited to those with a landline.

While efforts are made to ensure that age demographics are representative samples, the quotas are initially filled by over-60 age groups who are more likely to be home, as the polling completely cuts out households without landlines.

Former Labor speechwriter (an IA columnist) Bob Ellis has satirised this situation by drawing on another Newspoll employee’s account of his company only managing to reach thousands of 65-year olds after lunch on a Saturday. Nevertheless, the Daily Telegraph managed to transform the views of so many landline-tethered seniors into the headline:

But will these polls influence the PUP? Palmer himself is on record as questioning any polling coming out of the News stable:

Of course the polls are rigged: Rupert Murdoch owns Newspoll and Galaxy Research, and the media set the agenda and try to determine the result of an election before it is held.

Palmer’s presidential-style address on an ETS a few weeks ago seems to have lost conviction. PUP are still backing all the renewable policies, but will need Labor to step up to get an ETS on the agenda, which it has.

But Palmer knows that voters are more upset by the budget – it is difficult to ‘rig’ a street march – than by repealing a tax that pays down the deficit without any measurable pain, compared to the palpable pain that is being wrought by the multiple taxes and cuts in the budget.

Palmer also knows that the government is in real trouble over the budget, and that it relies on the PUP senators to pave the road-to-nowhere. Blocking the most hurtful of the budget reforms might well be the kindest favour PUP could offer the government.

And in a strange twist, even The Australian knows this. In what was an astonishing editorial published on the weekend, 'Time for Tony Abbott to commune with his people', The Australian lectured a Liberal prime minister on how to lead.

The editorial manages to bury a few compliments in a list of reprimands.

Abbott is told he has failed to set a political agenda to:

… inspire voters and make headway on reforms that would preserve our lifestyle.

Further, Abbott continues to behave “as if he were opposition leader”.

The Abbott team is characterised by zealous centralised control, with the hunting down of leakers to maintain discipline.

Unless the government can communicate with the middle-income workers, who The Australian claims were attracted to its economic management potential last election, it is in trouble.

The subtext of this editorial seems to be: Tony, we are happy to help you out, get you elected, manufacture a majority view around carbon and whatever else — but hey, you are making it difficult for us by turning on the electorate. Be radical, yes, but we really can’t guarantee you a second term if you keep up your current course. Do you hear what we are saying? Please be a bit nicer to people.

With the poll and editorial in one weekend, News Corp’s masthead was saying to Abbott: we’ll help out with carbon repeal, but clean up your act.

But then again, a newspaper that makes a loss of $30 million per year according to the Financial Review, and has made a loss since 2007 according to its own editor, does not really need politicians to make it easy for them.

The colourful gallery of columnists at The Australian are not accountable to readers at all, as they will always be subsidised by News Corp’s tabloids. They will continue to be paid, no matter how bad their journalism is, and no matter how few readers they have.

At Brisbane airport they can't even give the #Lolstralian away. pic.twitter.com/LlNisKqUEX 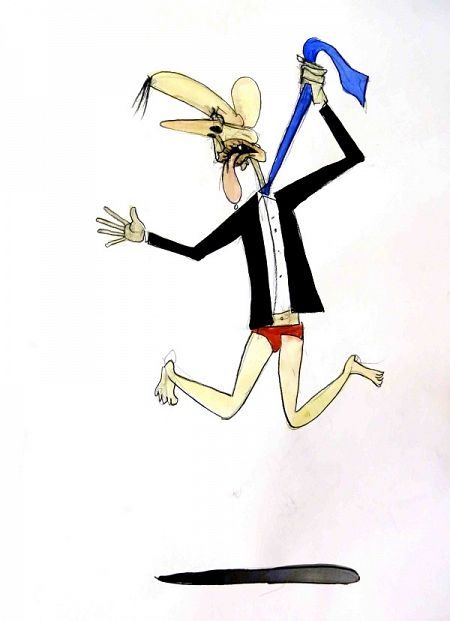