The Murdoch media have gone the full Abbott this week with multiple articles spruiking a comeback for the disgraced former PM. In the spirit of Tony, they are riddled with hypocrisies, distortions and lies.

In an extraordinary lament for her fallen hero, Miranda Devine wrote yesterday:

‘The Liberal Party should never have toppled Abbott … The coup was a breach of trust with the electorate, an admission of catastrophic failure where none existed … All of which I wrote at the time, although without anticipating just how profoundly Abbott would break his promise of “no wrecking, no undermining, and no sniping”.’

Abbott’s administration dudded the electorate from the outset. Of the myriad specific election promises, all but a few were trashed in the early weeks. The broken promises and backflips – which tallied 85 well before he was ousted – were breaches of trust with the electorate. But so were many promises kept.

He fulfilled virtually all his promises to enrich the rapacious big corporations. He ended the carbon and mining taxes, let them pay only what they wanted in company tax, reduced wages, cut regulations and allowed the rates of worker deaths and corporate rorts to escalate.

Yes, he promised to stop the boats. Labor, however, had already accomplished this, as John Menadue has shown convincingly.

Listen to this: John Menadue talks to Jon Faine about Rupert Murdoch, the great rentseeker https://t.co/fltk7VqpIY via @EMAILiT

There most certainly was "catastrophic failure" under Abbott.

From the Coalition’s viewpoint, the 30 consecutive negative opinion polls was emphatic evidence of failure.

This has not changed. A poll this week in the popular youth media asked, ‘Who was Australia’s worst prime minister’ and offered nine options, from Whitlam to Turnbull. A staggering 62% voted for Abbott. Turnbull and Howard were a distant second and third at 18 and 15 per cent respectively.

Worst ever PM Tony Abbott & his crazy ideas effectively excoriated in this article. Tony, it's time to move on. https://t.co/sDFMt8mbfY

Devine should have known

‘... Abbott would break his promise of “no wrecking, no undermining, and no sniping”.’

“He’s a cancer,” says one of his conservative colleagues.

Senator Cory Bernardi, who quit the Liberals this year to start his own Australian Conservatives party, says his fellow South Australian is “the most untrustworthy person I’ve ever met in this business”. 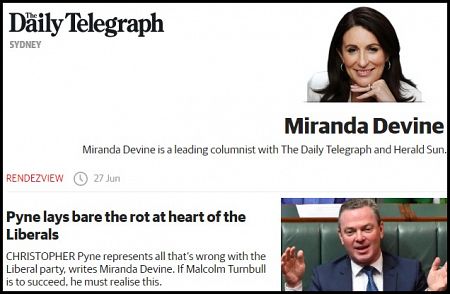 No, the ‘rot at the heart of the Liberal Party’ has been evident from 2010, soon after Abbott was elected leader. This led directly to the abandonment of bipartisanship in defence, border security, foreign affairs and trade. Trashing this cherished Westminster tradition helped Abbott get elected, but did enormous damage to Australia’s economy, refugee policy and standing in the world.

No, Bernardi is wrong to claim Pyne is “the most untrustworthy”. That would be the guy who quit to start his own party a few months after being elected as a Liberal for a six-year term.

The Australian ran another puff piece on Tuesday headed:

The “reporters” seemed blissfully oblivious to the screaming hypocrisies they were defending.

Tony Abbott delivers stinging rebuke to the Turnbull government, promising he is “in no hurry to leave public life" https://t.co/0WvuyZFJnn

They started with this (guess who said it?):

“We have an abundance of energy – but the world’s highest power prices; an abundance of land – and property prices to rival Hong Kong’s; some of the world’s smartest people – yet with school rankings behind Kazakhstan. We need to make Australia work again.”

Yes, it was Tony Abbott — who in four years as Opposition leader and two as PM, did more than anyone in recent history to encourage the predatory profiteering of the power companies, cut incomes of the lowest-paid, stymie renewable energy, protect negative gearing and other rorts distorting the property market, and impede education reforms.

Abbott’s recipe for the economy was epic do-as-I-say-not-as-I-do:

“The best way to get federal spending under control … is to avoid all new spending other than on national security or economic infrastructure. It can be done. In two elections 2010, 2013, the Liberal National coalition made big gains promising spending cuts, tax cuts and regulation cuts.”

Yes, Abbott made big gains with promises. But after four years trying to thwart Labor’s sound management, he delivered the opposite in Government.

A provocative call to arms to right wing forces. "The next election won't be won by drawing closer to Labor" - @TonyAbbottMHR. @Riley7News pic.twitter.com/7d6tGxsCkB

"The Senate has become a house of rejection, not a house of review. This is a recipe for gridlock, not government, and it must end ..."

That was true when Abbott was Opposition leader. It is not true now.

Yes, some legislation has stalled in the Senate, but only those that were:

"Abbott’s numbers in the party room have dwindled from the size of a phone box to 'a batman suit'."

Let’s hope she is correct there.

Political divisions within the government are rising, as Tony Abbott vows to outlast Malcolm Turnbull in federal politics. @olivialeeming pic.twitter.com/93VHXrRhsK

Tony Abbott's speech to the IPA today sets out a clear Conservative agenda on which to fight the 1983 election.

Anyone recall Tony Abbott kneeling at US citizen Rupert Murdoch's table during the IPA gala dinner ahead of the 2013 election? #4Corners pic.twitter.com/fW1VQ21VLj