IN 1998, Regurgitator was riding high on the success of their hit single, 'I like your old stuff better than your new stuff when former Elvis impersonator and current Queensland Attorney-General Jarrod Bleijie was heading toward graduating from Caloundra State High School.

Not long after being elected to the Parliament in 2009, Bleijie gave an impassioned speech against the introduction of anti-association laws proposed by the then Labor Government.

"... an attack on the right of freedom of association.

"I say to the people of Queensland that, with this government, they do have something to fear.

"This Bill encroaches on their personal freedoms and liberties.

Fast-forward to 2014, with Mr Bleijie now in government and seeking to defend his introduction of a Bill which will destroy the independence of Queensland’s anti-corruption watchdog, the Crime and Misconduct Commission.

The letter from the Attorney-General (published in the Courier Mail, 28 April 2014) starts off well.

The Attorney expresses support for the ‘foundation for good, honest and transparent government’ built by the Fitzgerald Report.

It ends with a flourish, saying:

‘It is in everyone’s interests that Queensland continues to have a strong and independent watchdog. Governments come and go but the Commission’s independence should not.’

These are sentiments every Queenslander should support.

They bring to mind the vintage Bleijie, ready to rush to the barricades against the threat of tyranny.

It is the omissions and misleading statements throughout the rest of the piece which are of concern. There are not only some startling inaccuracies in the piece, there is much which is omitted.

Mr Bleijie says the government is keeping its promise to restore government accountability. He cites the two recent reports into the CMC, which he says revealed

‘…serious issues with the Commission’s structure, administration and complaints-handling processes.’

What Mr Bleijie fails to outline is how the removal of bipartisan support for the chair of the CMC is supposed to fix any of the problems revealed in those reports. Nor does he say that neither of those reports, nor the report into the shredding of the Fitzgerald Inquiry documents, recommended that change.

Mr Bleijie, in common with the Director-General of his Department, Mr John Sosso, has been unable to provide one single shred of justification for the removal of the requirement for bi-partisan appointment.

To suggest the requirement for bipartisanship somehow ‘leaves the appointment process open to politicisation’ is ridiculous.

It is even more extraordinary to make such a statement in the absence of any evidence, or any recommendation being made in three recent reports about the CMC.

Mr Bleijie says that under the new regime, the Crime and Corruption Commission, or CCC, the chair

‘… will rightly be able to tell anyone, including the Premier, who tries to influence the Commission to take a long walk off a short pier.’

This confident statement is not borne out by the evidence of the current Acting Chair, Dr Ken Levy, who told the Parliamentary Crime and Misconduct Committee (‘PCMC’), on 13 November 2013, that he had not been critical of the government during his time as acting head of the CMC.

Dr Levy raised the concern that there was a risk the government would “get rid of the CMC” if he did so.

Hardly the words of a fearless watchdog.

It should be noted that Dr Levy, as an acting appointment to the role of chair, has not been appointed on a bipartisan basis.

His tenure has been marked by controversy, the latest instalment of which involves the question of when the premier knew that David Gibson MP, chair of the Select Committee on Ethics formed to investigate Dr Levy, had himself been charged with theft during his time in the Army.

Mr Bleijie seeks to comfort the public that some accountability will be retained in the CCC. He says the PCMC ‘will, under nearly all circumstances’ hold public hearings, suggesting the CCC’s hierarchy will

'... be under more scrutiny than ever before’.

There are two rejoinders which must be made to this statement.

Firstly, the PCMC is the very body the Premier unilaterally decided to sack when it was getting too close to revealing the misleading of Parliament by the government’s appointed acting chair — Ken Levy.

The Speaker of the House subsequently received legal advice to the effect that the Premier’s actions in sacking the PCMC had been legal. There appears to be no cogent reason why the Premier would not take the same step again in the future to shut down inquiry into the CCC.

Secondly, the explanatory memoranda for the Bill to create the CCC, prepared by Mr Bleijie’s own Department, says:

‘The [PCMC] currently holds public meetings with the commission except for discussing confidential or sensitive information. The proposed amendment to require public meetings formalises the current practice.’

Far from introducing some new level of accountability and transparency, this legislative change would simply ‘formalise current practice’. It may be observed that it does not matter a great deal whether the PCMC hearings are public or private if the body it is overseeing is beholden to government and the PCMC membership know they can be sacked, without any proper foundation, at the Premier’s pleasure.

The new CCC may well be fearless, relentless and effective when dealing with those who oppose the government of the day. It is how diligently it questions Government corruption ‒ the most serious of all forms of corruption, since the Government holds the State’s treasure and levers of power ‒ that make the changes so perilous.

As Tony Fitzgerald QC AO, in his submission to the Committee considering the changes to the CMC, said:

‘If the Bill is enacted in its present form, partisan appointments will follow and Liberal National Party politicians will not have to worry about their conduct while opposition politicians will be at constant risk.’

Mr Fitzgerald’s new stuff is, to be sure, very much as good as his old stuff.

Sign barrister Peter O’Callaghan's online petition on change.org by: ‘Do not make us relive history — save the independence of the CMC’. 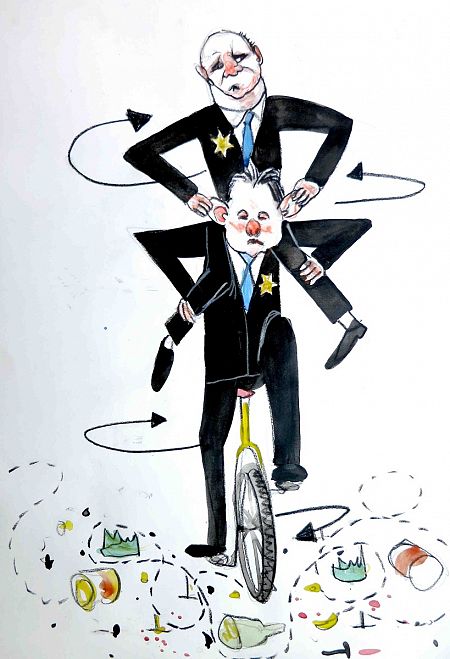