Neoliberalism, the ALP and the full death rattle Morrison Government

It is likely Australian voters will put the Labor Party into power in 2019. Will they be any better than this full death rattle Morrison Government?

The trite answer is that no one could be as bad as this Coalition of chaos and confusion. That may well be true. However, winning an election because you are not the Morrison Government will not maintain your popularity much beyond May 2019. Certainly, it will not ensure your re-election in 2022. Nor would it stop internal fighting over who should lead you in a vain attempt to find a winning leader, rather than to develop popular and winning policies that bring you into conflict with the ruling elite.

There are systemic issues that will challenge whoever is in power. Standing like the proverbial elephant in the room is stagnant wages. They tell their story. Politicians are listening, but they do not hear. There is a simple reason for this.

Stagnating wages is a systemic class issue that requires a systemic class response. Fiddling at the edges with company tax cuts, interest rates or industrial relations laws will make little difference to the systemic drivers of capitalism keeping wages stagnant. Labor coming to power, as now seems likely, will make little difference to this problem and for precisely the same reason.

Many recognise the problem. The Governor of the Reserve Bank of Australia has been warning about the impacts of stalling wages for some time. A recent headline in the Australian Financial Review warned of a bleak Christmas for retailers because consumers (that is, workers) would not be spending up big.

Why not? Because of stagnating wages and the fact many working-class families, with an average household debt ratio of 190% of disposable income, are already close to the edge. Arguably, the increase in debt that workers have drawn on over the last few decades has been a response to inadequate wages. Now, however, many workers can borrow no more; their level of debt is, to quote Gareth Hutchens, "extreme".

What is holding real wages back? In all the idealised free market models, businesses compete with each other. They want to make a profit to reinvest to make more profit. Wages are for capital an important cost of doing business. Each individual employer wants to increase their profits at least in part by cutting costs or keeping a lid on them. Yes, but why has capital been more successful in doing this now compared to earlier periods?

In the September quarter, underemployment was over 8%. Many of those working less than full time want to work more hours but cannot. Employers can just draw on their current workforce to expand production, without having to bid in a competitive market. Arguably, too, some of that workforce is more interested in working more hours (and hence getting a higher pay packet that way) than higher wages.

Unemployment in the October quarter was reported at 5.1%. While this is low by recent standards, it is not anywhere near the 2% figures of the late 1960s. The fact that there are about 16 unemployed people for every job being advertised means that the pressure for workers is on getting a job to survive.

The missing element is organised labour. Union membership since the mid-1970s has been falling. As this Australian Parliament House Library graph shows, membership levels in 1976 were over 50% of the workforce. 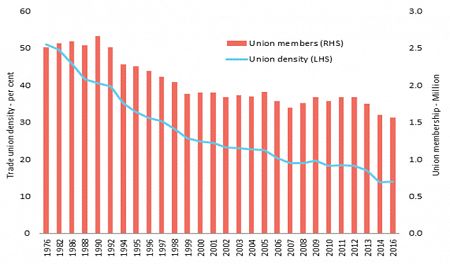 Saul Eslake in The Conversation has helpfully put the wages and profits share of national income since 1960 into one graph for us to see the long-term results: 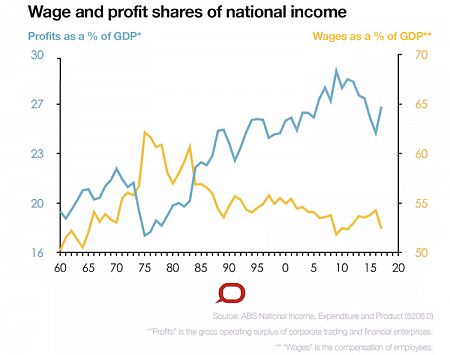 Eslake’s graph shows that the decline in labour’s share began at the very time the Hawke Government came to power and implemented, the "what's good for the bosses is good for employees" Accord.

This is an argument that Labor Member for Lilley Wayne Swan, former Treasurer during the Global Financial Crisis (GFC), specifically rejected in an interview with IA last week.

Speaking with IA, Wayne Swan made the argument that increasing inequality was undermining support for the system. He believes the economy is slowing, wages are in decline, underemployment is rife and that there is a power imbalance between corporations and ordinary working people. And he is certainly passionate about the Labor Party's approach, which saw Australia sidestep the GFC under his watch as Treasurer.

Swan says the Morrison Government continues to embrace trickle-down economic theories, which have been comprehensively disproven and is doing nothing to guard against a possible recession.

Yet, while Labor’s tax policies on negative gearing, franking credits and capital gains tax make sense, they may do little to address the already occurring income imbalance from shifting further to the well-off.

We are passionate about equality whether it is economic, race or gender. At the core of what we do is a policy platform that addresses inequality, creates prosperity, delivers opportunity & fairness for everybody across our society. #auspol pic.twitter.com/fW0MZbpSyn

One thing is clear:  while wages have been stagnating, ‘profits are far outpacing wages’.

This graph, compiled by The Guardian's Greg Jericho, illustrates the point beautifully: 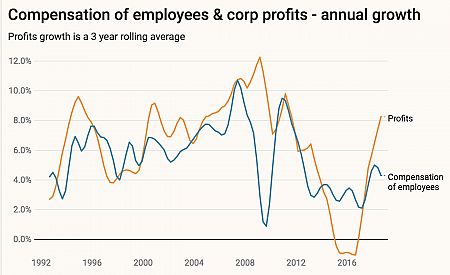 There is a close correlation between falling union membership and falling strike numbers and on top of that, the falling share of national income going to labour, compared to capital. This latter finds expression in recent years in falling wages. The Director of the Australia Institute’s Centre for Future Work, Jim Stanford, found a close statistical relationship between the level of industrial action and the growth of wages over time. 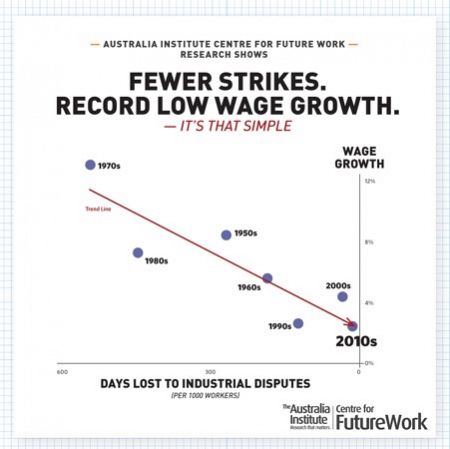 Part of the explanation for this is the class collaboration of the trade union leadership and their adoption of trickle-down economics. In the 1980s, this approach was exemplified by the Accord, reflecting neoliberal labourist thinking that the results of a good economy and profits could in part be transferred by a sympathetic government to workers, and would in part be transferred by the largesse of capital. Unions basically stopped fighting for wage increases. In addition, governments severely narrowed the scope for legal or protected strikes.

Is Australia facing a lost decade in living standards? https://t.co/Ew1rm9isoP

Another result has been a collapse in the number of workers in unions. A third was the collapse in strikes. And the fourth we see today in stagnating wages and living standards.

The economy could worsen. The latest GDP figures show a drop in growth from the Government projection of 3.5% to 2.8% in the last quarter. Figures in the U.S. show an inverted return so that investing in three-year government bonds yields higher returns than investing in five-year government bond rates. Such an outcome could be an indicator of a recession to come. It last happened in the U.S. just before the GFC. It has certainly spooked the markets offshore and in Australia, and is made worse by President Trump's trade war with China.

Labor proposes an easing of restrictions on union organisation but has not yet instituted an unfettered right to strike — one of the fundamental freedoms and a great weapon for winning social, political and economic improvements and higher wages and other benefits.

Abolishing the Australian Building and Construction Commission (ABCC) is a good policy. So too is restoring penalty rates. But neither addresses the systemic pressures causing stagnating real wages. And if a recession hits the U.S. – as the three and five-year bond rate inverted figures indicate – it could soon hit the global economy and flow through to Australia, increasing the pressures to cut wages.

The trade union movement has been at is most influential and workers the most well off when the movement has fought for real wage increases. Put simply, the more strikes the higher the wages. "

Labor will be under the same pressure as the Coalition to manage a system that is possibly slipping into recession. That means Labor faces the same prospects in government as the current Coalition Government.

To change their rules we need to break their rules. How then can we keep the Labor Party, whose role is to manage capitalism, focussed on our needs? Industrial militancy will keep their eyes firmly fixed on us. Strikes are the only way forward, no matter who is in government. 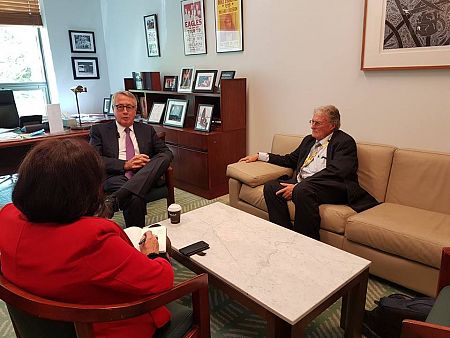