The closure of the Nauru Detention Centre will save the Commonwealth $1.3 billion, however its humanitarian purpose is less clear, writes Bob Ellis. 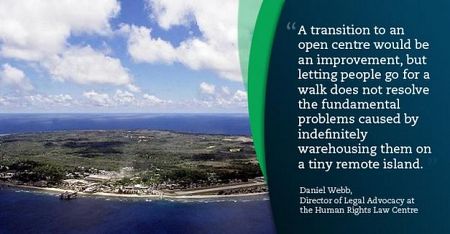 The figures behind these two Monday announcements, then, are clear.

But the humanitarian purpose? This is harder.

Children now eight or ten are being made, by the look of it, to live for 90 years in exile among unpunished rapists and corrupt police in a tropical tyranny subsidised by our government — one that locks up its members of parliament and banishes its judiciary. They will not be allowed to leave there — to go, say, to university or marry within their tribe, or seek fulfilling work in Europe, America or Australasia.

Dutton, meanwhile, will be accused of not protecting them – as he is legally obliged to as their guardian – from rape, forced whoredom and psychological anguish, and so will his predecessor Morrison.

Will these international criminals go to gaol? Will their crimes against humanity be noted by the Murdoch press and the ABC? It’s hard to say.

One thing, though, is pretty certain. Eminent journalists – Peter Greste, say, or Chris Masters – will be able to interview the exiles in situ and prominent advocates – Julian Burnside, Gillian Triggs, Sarah Hanson Young, Rosie Batty et al – report on their situation and plead their cause.

And the overseas detention centres will close, in due course, this year or next. And, one way or another, this decade or next, some genuine refugees – Syrians, for a start – will be allowed into Australasia. And our part in their torment and the violent death of some of them, at their own hands, or those of their screws, will be noted by history.

This is a shameful episode — brought to light I think by the coincident spectacle of the multitudes invading Europe, the mothers and infants and young men with university degrees, the poor and huddled masses yearning to breathe free, whose local equivalents we, for 20 years, kept away from probing cameras, calling them "on-water matters", which must, for security reasons, be hidden from public view.

And we will become as reviled as the rednecks of Dayton, Tennessee, who, in the Monkey Trial of 1925, showed how primitive and unevolved they were. And how ape-like Dutton is — our worst and cruellest Minister since Federation.

The Turnbull govt goes after whistleblowers instead of the rapists & murderers in Nauru detention centre http://t.co/MSIDt3GZxl #auspol