Turns out, Christopher was just kidding. He wasn’t down the back of the Airbus at all. He was up the other end, turn left past the curtains.

On his $30,000 dream Roman holiday, Christopher Maurice Pyne scored what all Australians dream of — the free upgrade.

But not just for one leg of the gruelling 22 hour flight to London via Dubai — but all the way there. And then back again on the return flight. As well as for his wife.

Not bad work if you can get it.

On 14 May 2014, Pyne updated his Register of Members’ Interests to note: 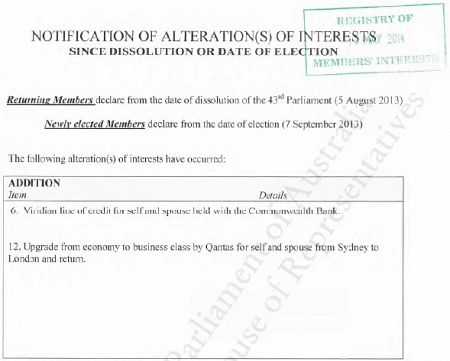 ‘Upgrade from economy to business class for self and spouse from Sydney to London and return.’

Breaking the story based on the results an FOI request by a member of the public, The Age ran a story, which stated:

A letter from Ms Credlin to Mr Pyne's office approving the trip also notes that the attendance of Mrs Pyne was expected to cost the Commonwealth no more than a business class airfare for the minister. As a minister, Mr Pyne is entitled to fly business class on official overseas travel.

Mr Pyne flew business class from Adelaide to Sydney but switched to economy for the rest of the journey to London.

Despite feeling the need to update the pecuniary interests register, this upgrade ‒ worth several thousand dollars at least ‒ was not mentioned by Pyne or any of his spokesperson in any interviews on this subject.

And why, on arrival, did Christopher need to hire a VIP suite at $2060 of taxpayer’s money when he could have just flopped in the business lounge and freeloaded for a few hours? They have showers.

And why, in the hours before departure, hire a day – not overnight – room at the Corinthia for $1,352 of Commonwealth funds when ditto the lounge?

Jeez, kill a view hours before the flight, go to the Tate, have a pint or two, swan around the streets pretending you’re Georgie Girl, it doesn’t matter. You’d’ve saved at least a grand and come back to Team Australia with a clear conscience.

Christopher says he needed the room as a base from which to attend meetings throughout the day. It would be informative to see a scan of his diary page for 28 April 2014 but, as the say in Rome, Buckley’s.

As it is, all the left-wing nutters will speculate that Abbott called Joyce to agree an expedient budgetary salve, AKA upgrade and the whole Chrissy travelling economy class thing was a put-up job from the off.

No wonder Qantas is going down the gurgler.

How nice! Qantas gives Pyne an upgrade from economy to business class for the entire return trip to and from London. pic.twitter.com/jZsHrHp61i