Despite his apology in Parliament, Scott Morrison has not changed and continues to behave in the same toxic and misogynistic manner that he always has, writes Hayden O'Connor.

As recommended by the Jenkins Review, on Tuesday, Prime Minister Scott Morrison delivered an acknowledgement and apology to those who have been victims of bullying, sexual harassment and assault whilst working in our Federal Parliament.

Apologies are nice but actions speak louder than words and Scott Morrison’s actions continue to prove that he is a heartless, self-centred misogynist. The Prime Minister’s words are at best meaningless, at worse complete lies and his apology is simply a calculated political decision.

If Morrison’s apology was genuine and sincere, we would have seen a change in his behaviour.

For starters, he would have invited Brittany Higgins, Rachelle Miller and others to the acknowledgment and apology in Parliament. Instead, MP Zali Steggall had to secure their attendance. If the absence of an invitation to Higgins and others wasn’t deliberate, then it was almost certainly an afterthought whilst the Government attempted to find an easy win on “women’s issues” in response to their declining polls. 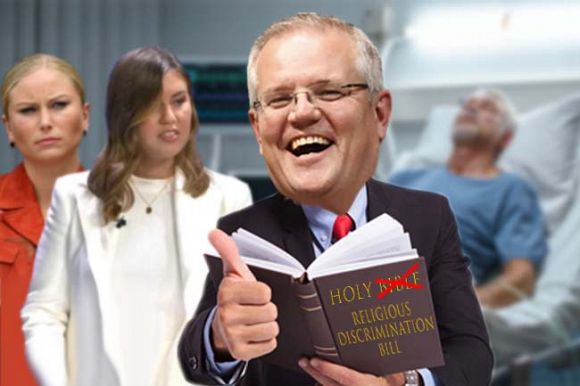 If Morrison’s apology was genuine and sincere, he would have attended Grace Tame’s and Brittany Higgins’ speeches at the National Press Club. By snubbing this event, Morrison has confirmed once again that he does not consider rape a serious matter.

As survivors of rape and as advocates for reform, the insights from Tame, Higgins and other survivors is invaluable; when they speak all legislators should listen, learn and then act. By not attending, Morrison deliberately projects his smug-smirking arrogance, for he is the Prime Minister and he doesn’t need to learn anything from anyone.

Perhaps Morrison didn’t attend the speech because he was afraid that Grace Tame might reveal details of a threatening phone call that she received in August 2021 — which of course, she did. The obvious dot joining is to conclude that Morrison was responsible for this call taking place; there is no evidence for that but it’s a logical conclusion.

The Prime Minister’s Office has already denied any involvement in the threatening call but the President of France and Deputy Prime Minister Barnaby Joyce have both accused Scott Morrison of lying. Make no mistake, Scott Morrison is indeed a liar so there is no reason to believe his office is telling the truth on this occasion.

If Morrison’s apology was genuine and sincere, he wouldn’t have attempted to prevent MP Bridget Archer from attending the Tame/Higgins event. According to Samantha Maiden’s news.com.au article, it was “up to the Prime Minister” as to whether the Tasmanian MP could attend or not.

Labor had offered a pair so Archer could be absent from Parliament and attend. At that point, the decision should have had nothing to do with Morrison and as a survivor of child sexual abuse, any attempt to prevent Bridget Archer from attending can only be described as cruel.

Attempting to stop Archer from attending is exactly the type of toxic, controlling and misogynistic display of power that Morrison’s apology was addressing. Yet just hours after his speech, Morrison was back to business as usual — the business of being a smugly-smirking, misogynistic Prime Minister.

Part of Scott Morrison’s apology was addressed to Brittany Higgins directly. If that part of Morrison’s apology was genuine and sincere, surely he would have resumed the Phil Gaetjens review into who knew what and when regarding the rape in Parliament House. Of course, Scott Morrison wouldn’t and couldn’t admit to having known about it earlier than he has claimed, but he could have at least apologised for backgrounding against Brittany Higgins’ partner, David Sharaz.

Given Morrison’s refusal to change and his refusal to apologise for his own behaviour, his apology is nothing but a political stunt.

Workplace culture starts from the top. If we want to eradicate toxic behaviour in Parliament, it must begin with the Prime Minister. At the end of the day though, Scott Morrison is a misogynist and no amount of taxpayer-funded empathy training is ever going to change that.