Morrison sorts it out

Disbelief greeted Morrison’s news that everyone found to be a "genuine refugee" would be "settled in PNG" and nowhere else — an announcement clearly timed to affect the vote in WA.

He didn’t say how much this would cost, or if it meant we would build whole cities in that country, or gated suburbs, or a single big motel, or how much each refugee would get from us – the ‘Australian taxpayer’ – per year and for how long; or if he thought this plan would get through the PNG parliament; or if homosexuals would be accepted there, and not gaoled for life or hanged for their heinous offence.

He gave no details, as always.

He also didn’t say what would happen to those found not to be refugees, if they’d be sent back to execution in Sri Lanka, Somalia, Iran, Afghanistan, or imprisoned on Manus for life, their wives and children also. In the weeks since, it became clear that none of this was working, Morrison has been in deep emotional and religious trouble, in my view, and fearful of his own fate, and exaggerating his own victories.

And, by the look of it, telling lies.

He won’t say either how many might have made it, like the one on 7.30, to Melville Island. He won’t answer the basic question of how many, in a month, when a whole 777 disappeared at sea, might have made it into, say, Broome with the bribed help of local fishermen, or, if they’d come by submarine, how they might have been detected.

He hasn’t said either why he’s keeping two murderers in his employment and how much he’s paying them, and why he’s protecting them from the PNG police. And if it’s occurred to him that sheltering murderers and concealing their identities are crimes he can be gaoled for.

All in all, it seems possible that Morrison has lost his mind, and if he hasn’t jumped the gun with his refugee-PNG announcement, he may have simply made the whole thing up. He’s no more to be trusted on this, I think, than on his grand plan to lessen the number of boat arrivals by buying the boats of the smugglers.

He seems crazier and crazier to me, and losing his hair like one in a process of nervous breakdown. 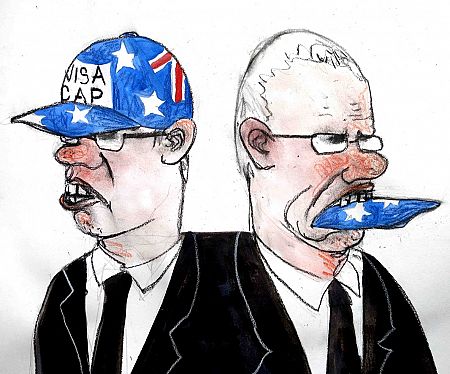