Morrison holds lead in popularity despite failing in leadership

Despite a lack of progressive policies and various demographics being neglected, the Morrison Government is still retaining a lead in popularity, writes George Grundy.

WHEN PRIME MINISTER Scott Morrison took the stage to celebrate his 2019 Election win, he centred his speech around the people of Australia, the “quiet Australians” as he called them, and his intention to govern for those people.

Two years on, it’s a very different picture. Morrison has presided over one of the most corrupt governments in Australian history. Senior colleagues have been accused of sexual impropriety. Government debt has gone through the roof and the COVID-19 vaccine rollout is among the worst in the developed world. Despite this, Morrison still commands a 56% preferred Prime Minister rating, with poor Labor Leader Anthony Albanese mired at just 30%.

Regardless of your political persuasion, it seems almost inexplicable. Governments normally try to appeal to wide sectors of the population in order to retain their power, yet it’s hard to see which Australians benefit from Morrison’s feckless and ineffective management.

It’s certainly not women. Domestic violence continues to blight Australia and political behaviour that would get you sacked from most jobs goes for the most part unpunished in Canberra. Last month, a woman was tied up and burned to death by an ex-partner while her three children were in the house. In a nation where, on average, a woman is killed by a current or former partner every nine days, this should have been a Sandy Hook moment for Australia, something so horrific that it demands immediate action. 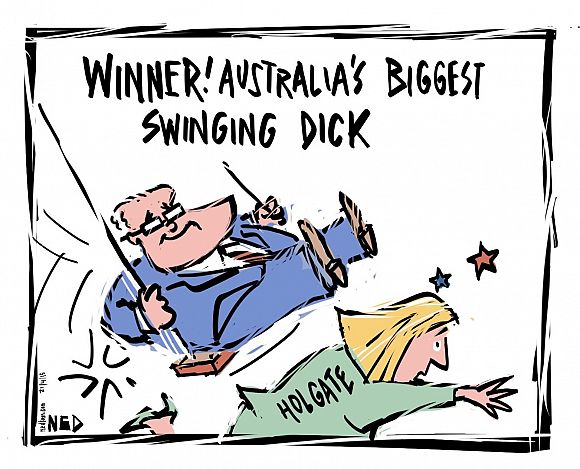 Christine Holgate's level of power or privilege is not relevant to the fact that Scott Morrison bullied her out of her job, except to show that no woman is immune.

You might reasonably have expected the Prime Minister to announce a royal commission, tougher sentences, more protection for vulnerable women, stronger restraining order enforcement and mental health and counselling services for men. Yet Morrison, who appears to have a problematic relationship with women in general, has offered nothing substantive. It’s certainly not women.

It’s not Christians, or at least it shouldn’t be. Morrison uses taxpayers' money to attend his pyramid scheme of a church, selectively invoking his faith when politically convenient and piously twisting the message of Christ to his own ends. What true Christian would interpret biblical morality to allow the imprisoning of two Sri Lankan children and countless other refugees in facilities that have been condemned by the United Nations as torture? Jesus, a penniless Palestinian cleric, would risk finding himself in one of these facilities should he ever make it to Scott Morrison’s Australia. Morrison’s actions should bring shame to any true Christian. It’s not Christians.

It’s definitely not children — Australia is rapidly becoming the world’s carbon pariah. U.S. President Joe Biden left April’s climate summit before Morrison even spoke, perhaps mindful that goals centred on the year 2050 aren’t worth a bag of beans. Scott Morrison will be 82 in 2050 and our kids will be dealing with his legacy of climate catastrophe.

Carbon dioxide levels are already higher than they have been for 3.6 million years. The climate crisis is right here, right now, yet the man who brought a piece of coal to the floor of Parliament continues to tout a gas-led economic recovery. As the Garnaut Climate Change Review reported, Australia has unparalleled renewable energy resources, while at the same time being one of the most exposed nations to the ravages of climate change. Morrison saw the worst fires in generations and flew to Hawaii. It’s definitely not children.

Which means it can’t be our country cousins, reflexively voting for the National Party that hands Scott Morrison the tiniest balance of power. Food lining city supermarket shelves comes from farms now dangerously exposed to climate-change-induced fire, heatwaves, changing seasons and storms. The 2016 Paris Agreement aims to keep the global rise in temperatures below two degrees celsius. Australia’s climate targets pitifully fail to even attempt this goal, beyond which the scientific community is united in saying disaster lies. It can’t be our country cousins. 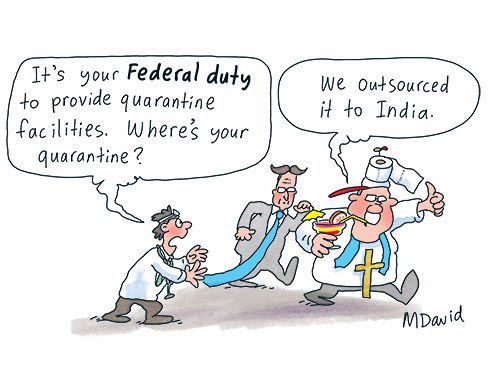 It’s not the elderly. Australia’s excellent performance in keeping COVID-19 at bay has almost exclusively relied on state premiers rather than our “I don’t hold a hose, mate” Prime Minister. This success has been blighted by the fact that around three-quarters of Australia’s COVID-19 toll has taken place in (80% federally funded) aged care facilities. The interim Royal Commission report on aged care, delivered to Scott Morrison in October 2019, is being slow-walked by the Government as horrific reports into elderly care continue to surface. It’s not the elderly.

And it is most certainly not anyone with brown skin. Issues like Indigenous deaths in custody and sky-high incarceration rates don’t seem to be priorities for a government with a permanent whiff of racism about it. Indian-Australians have recently learned just how reactionary Scott Morrison can be when the virus hits a non-Western nation. It’s pretty clear that Morrison thinks that Australians of Indian origin are not quite as valuable as their White counterparts. It’s most certainly not anyone with brown skin.

Scott Morrison’s Government wages war on the poor, the weak, women, minorities and children. His climate policies pose an active threat to this nation’s future. Yet 56% of Australians still have him as their preferred Prime Minister.

There is one small segment of the community that could viably claim to be happy with Morrison’s performance. White, male, heterosexual, religious, prosperous, vaccinated. By coincidence, this happens to be the demographic that Scott Morrison fits into.