Prime Minister Scott Morrison though wants his mate Rupert Murdoch to make some easy millions off someone else’s work.

When Murdoch has an itch in a place nobody would dare venture, even with heavy-duty gloves and a Hazmat suit, the Liberal Party can always be relied upon to help out. This time Scott Morrison has appeared with eager fingers and his trademark smirk.

Businesses once happy to take a punt with advertising budgets are now less willing to gamble and are investing marketing dollars where they know precisely how much bang they’re getting for their buck.

Traditional media, such as the printed press, television and radio have an offering.

For that offer, you’ll pay top dollar. You’ll also be rolling the dice on what page your advert will appear or what time slot it will feature in. You’ll receive a rough idea of how many brought the paper or tuned into the show, but this won’t be indicative of how many noticed your advert.

For newspapers, you’ll have no idea how much of the claimed circulation ended up unread in hotels, cafes, McDonald's and countless other businesses where papers are left as a seldom read courtesy.

Those still reading papers tend to flick through them, not reading the whole paper. Even if they pause for a second on the page your ad appears, chances are they won’t notice it.

If you’re advertising on TV your ad will likely play while someone is making a cuppa, going to the loo, or chatting to family or friends, radio adverts blend into the background noise in cafés, buses, stores, or taxis.

Certainty is available through Sky News. There you can be confident you can count the number of viewers on your hands. One hand after 6 pm.

Facebook and Google have taken the guesswork, gambling and fun out of advertising.

It’s no wonder News Corp and much of the mainstream media are finding it harder to flog their advertising slots these days, they are offering up crap and calling it cream.

The Morrison Government is seeking to find a way to ensure companies that have developed a superior product offering to compensate those who are failing due to laziness and a refusal to invest in technology that serves their clients. Throwing up paywalls and crossing fingers has proven a dud solution.

The Liberal Party mantra of "letting the market decide" is gone, replaced with a new one: "What the bloody hell would the market know?"

The aim of this new code, that Treasurer Josh Frydenberg claims the Government is “committed to”, is Facebook and Google paying the likes of News Corp and Nine Entertainment.

The Morrison Government apparently think people only visit Facebook or Google when they click on a link on their News Corp or Nine Entertainment feed? And here’s me thinking it was the other way around.

Most people I know read news articles online when they see them on their Facebook feed or they come up via a Google search. This isn’t rocket science; one only has to compare the number of subscribers to news networks and compare that to the number of Facebook or Google users to see who are the big fish in the online pond.

Facebook and Google currently send millions of potential customers straight to the websites of news organisations. Unlike most companies that provide a referral service, they do this for free, although Google place their own adverts on news content sourced via their site.

The Morrison Government wants to portray this proposed code as going after big tech giants and making them pay their way. This may be plausible if it weren’t for the fact that News Corp are paying three-tenths of bugger all tax and while the tech giants may not pay anywhere near enough, they are at least paying more than News Corp. 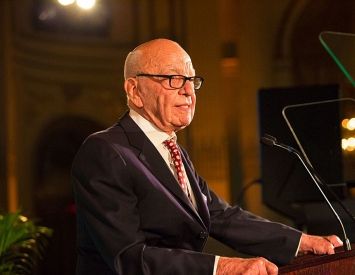 News Corp's closing of newspapers a blow to Australian communities

News Corp’s closing of its community and regional papers, with few remaining and others online-only, cancels centuries of beliefs about media in the community, which were already dying.

This proposed code is a power play. If you control the narrative you control public sentiment. The Coalition have been working hard on doing that since they took Government in 2013 and you have to hand it to them, they’ve done pretty well. They have allies on media boards. They control the ABC’s funding, even if the cuts don’t pull them into line, an AFP raid might. Plus there’s those ever-reliable pals over at News Corp.

It’s paid off for them as well, the media helped Morrison win the unwinnable election of 2018, Morrison describing it as a "miracle".

Morrison’s media cheerleaders have also kept him riding high in the polls after a nightmare first term.

He’s presided over the sports rorts saga and a catastrophic bushfire season during which he lied about holidaying in Hawaii. He returned only to further anger already burnt out and suffering communities.

He’s failed economically, lying and telling the country we were in surplus with a "Back In Black" campaign disguising the "per capita recession" Australia dived into shortly thereafter.

This year we’re dealing with the full-blown recession that came at a time where, with some media assistance, the public believe is due to the pandemic. That, of course, is the COVID-19 pandemic that entered Australia while Morrison was supposedly watching our borders.

As the Biloela family sat imprisoned indefinitely on Christmas Island, Morrison’s Department of Agriculture and NSW Health welcomed the Ruby Princess into Sydney along with the pandemic that would tear through the aged care sector John Howard deregulated leaving a trail of death and heartbreak.

Morrison owes Murdoch. This proposed industry code kills two birds with one stone. It pays back Murdoch and ensures a Coalition friendly media.

It rewards the big media players for their failure and throws the smaller media outlets to the lions.

We will lose what little balance is left in our media if the Opposition doesn’t step up.

Facebook has threatened to ban Australian users from sharing news if this code goes ahead and similar moves in Spain saw Google pull the Google News service. If this happens here traffic to news sites will plummet and only a fool would believe that newspaper sales would pick up instead.

That loss of revenue could see Morrison preside over the death of the Australian newspaper business. Poetic justice perhaps?