In a week when Newspoll showed electoral wipeout for the Government, Morgan’s more extensive multi-mode poll showed no rise in the L-NP’s primary vote and only 0.5% on a two party basis. 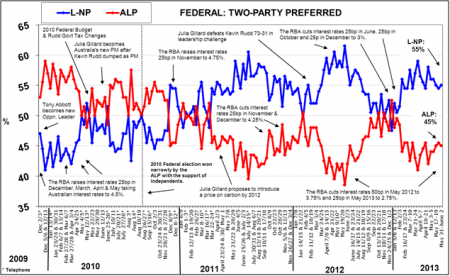 However, Morgan showed the L-NP primary vote at 45.5% ‒ unchanged for the last two polls ‒ while the ALP primary vote was down 2% from last week to 31.5%. Among the minor parties, Morgan shows Greens support is at 9.5% (unchanged) and support for Independents/Others up 2% to 13.5%.

As IA columnist Bob Ellis said in the Sydney Morning Herald in 2009, there are “questions to be asked” about Newspoll’s “whopping poll”.

A special online Morgan Poll conducted over the last few days shows a slim majority of Australian electors (53%) say they will vote either yes (23%) or are ‘leaning towards’ voting yes (30%) in this year’s Constitutional referendum question on whether to allow the Federal Government to directly fund local government.

This compares to 21% that say they will vote no to the question and a further 10% that are ‘leaning towards’ voting no — a total of 31%. Another 16% are still undecided.

(The multi-mode Morgan Poll on Federal voting intention was conducted over the last few days via Face-to-Face, Internet and SMS interviewing, May 31- June 2, 2013 with an Australia-wide cross-section of 3,276 Australian electors aged 18+, of all electors surveyed a low 1.5% (up  0.5%) did not name a party. See the full results from this survey here.)

13 September 2021, 5:00pm In an exclusive interview on The Sun Rises, heavyweights from the United Australia ...

8 September 2021, 5:30pm Since reclaiming his position as leader of the Victorian Liberal Party, much is ...
Join the conversation
comments powered by Disqus
News updates