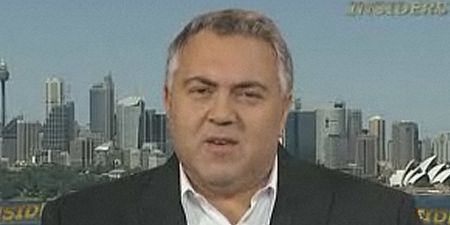 I find federal politics fascinating. Australians, in general, have no time for either Abbott or Gillard; neither leader is expected to deliver the truth and, on both sides, their senior lieutenants are unable to answer even simple questions put to them by journalists without some nonsensical response that relies heavily on spin and the evasion of the questions asked.

It’s no wonder Aussies have had an absolute gutful of politics on the federal stage.

Like many other low income Dads with a child at high school, I will welcome the latest leak from the federal budget in the form of the $820 education benefit for low income families — and am grateful for the assistance provided by the current government. Any assistance from the government is crucial to our family, however I would be happy if political parties simply declared the actions they take as simply for the benefit they bring rather than playing political games.

I have just watched Joe Hockey on the ABC Insiders program and was left frustrated by the way he skirts around simple questions; basic questions such as how the LNP budget papers would be legitimized, saying something like “watch this space”.

Why can’t these people simply answer the questions? This question only required a simple answer.

Mr. Hockey is not alone in his answering strategy. There are obviously answers to these questions, so why must they play “James Bond” and try to make out it is all top secret? We, the public, have a right to know the answers to such simple questions. Indeed, if we cannot receive an answer on such a simple subject as this, it makes one wonder what else is being hidden from us — which is why politicians are close to the bottom of the ladder on all known measures of public trust, usually below used car salesmen.

Unless, or until, politicians break out of this mode of haughty self-importance, it will remain difficult to vote for them.

We, the public, are not fools, and not do we have a lack of understanding of the issues, and are tired of being treated as though we are or have. Politics should return to a battle of philosophy and policy, well spelt out so that the average voter can make an informed decision about what it is they are actually voting for.