More Joe Hockey stupidity: Diamonds on the soles of his shoes

Fat man with a cigar says 'tighten your belts, the age of entitlement is over'. What is wrong with this picture, asks Bob Ellis.

What is wrong with this picture?

What is wrong with this message?

There is an old Labor saying: If you’ve never had holes in your shoes, you don’t know what it’s like.

I last had holes in my shoes in 2003 and a girl in the office, Viv Skinner, bought me new ones.

I had holes in my shoes because I had student-age kids and a half-million mortgage left over from misspending money on real estate in the eighties and losing it all. You get holes in your shoes that way. And you see things differently, with holes in your shoes.

Joe somehow thinks the occasional skint supporting mother with four sick children and a part-time job who has to pay, now, twenty-eight dollars a week to go to the doctor and twenty dollars more for medicine doesn’t matter.

He imagines she’s uncommon, statistically irrelevant, uninfluential when she whinges about it.

He imagines she doesn’t have a mother, an uncle, a schoolfriend, a neighbour, a fellow church member who’ll talk about her to others and write to their local member.

He imagines this kind of information, in the Facebook age, can be suppressed — as it was last century by editorial policy and a fearful ABC newsroom.

He imagines he can act as secretly as Howard and Costello did and get away with it.

He imagines no-one’s watching or listening.

He also imagines Howard and Costello got away with it, when their 1996 ‘tough budget’ lost them seventeen seats. Seventeen seats would put his mob out of government — and more people are watching, and listening, and reading now than ever before.

One of the things they saw was a fat man with a cigar telling others to tighten their belts.

One of the things they heard was of him, Joe, charging twenty thousand dollars for lunch with him, at the ‘North Sydney Forum’. What they heard was how Liberals have been buying influence in this fashion since Askin’s day, and the Liberal Party is, basically, a racket. Almost sixty per cent of New South Walespeople believe this now — and he’s telling them to tighten their belts, and share the pain, the burden.

They’ve seen Rake. They know how big a fib this is. Cleaver Green says I’m on your side, trust me.

A dimwit can work that out. Joe Hockey can’t.

Joe could have paid the interest on the deficit, $1.6 billion, by delaying for a year the money to be spent on the fool fighter-bomber that still can’t fly, and keeping all of Labor’s measures — broadband, Gonski, the NDIS, the schoolkids’ money, the ABC’s golden age — going.

He could have paid $3.2 billion next year by halving the pregnant millionairesses’ baby bonus, and waited for the economy to improve. Instead, he decided to wind up the Australian project — the fair go; the neighbourly society; the ladder of opportunity; the good village we all aspire to, altogether.

He imagines he’s got years, not months, before ICAC snares him and he has to resign his seat. That’s how dumb he is. That’s how truly dumb.

Treasury revealed on Monday that the deficit for the first nine months of the fiscal year was $24 billion. Which meant for the whole year it was about $30 billion, not $47 billion. This brought down the problem by a third, and meant Swanny’s date of surplus, 2017, was correct. Joe will get his surplus too by that year — and in the meantime destroy Australia.

But it’s likely he won’t get that far.

The reason is the disabled and their relatives. This is three million people. On top of them are a million immediate friends and what we call the doctors’ wives. These add up to 22 per cent of the electorate. Joe is telling the disabled to get off their crippled butts and on their bike and find a job — in an era when half the young people’s jobs are done by machines. If he loses that 22 per cent, he loses fifty seats and sweeps the Liberal Party out of Australian history.

That’s how good he is at adding.

Fat man with cigar says get on your bike, you cripples, the age of entitlement is over. The healthy ones, come pay me $22,000 and we’ll talk.

That’s how dumb he is.

This is the heart of a unconscionable pathological liar @GrillTeam pic.twitter.com/h79T7NJnEU 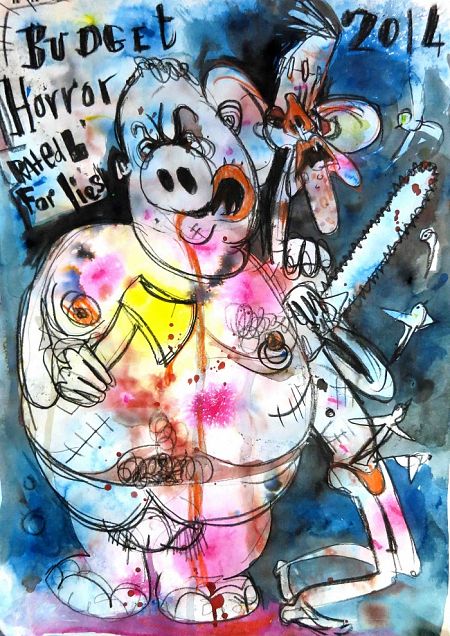